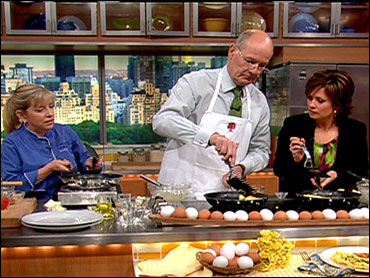 "Early Show Cooking School," where different culinary experts teach you how to make some great classic dishes, is now in session. Monday is omelet day. Your teacher: Sara Moulton.

Sara is the host of "Sara's Weeknight Meals" on PBS. You likely know her, she was one of the premiere personalities on Food Network in the network's early years, and for a long time she was Good Morning America's go-to chef. She's published several cookbooks, worked in various restaurant kitchens, and is the executive chef for Gourmet magazine.

What you need to know about cooking an omelet (one of those dishes that seems so simple, yet is easy to do poorly!):

Tricks to making a great omelet:

1. Use a non-stick pan when possible.

2. Butter will give more flavor than oil but will make the omelet brown (some people really like them to be a pale yellow).

3. Always whisk the eggs with a little water, 2 teaspoons for every 3 eggs.

5. A basic rule of thumb is that you need about one quarter to one third cup of filling for every two-three eggs.


Favorite fillings/ideas for dressing up the omelet:

For Vegetables: vegetables should be sautéed in advance, as they need to be pre-cooked before adding them to the omelet. Sara's favorites include: sautéed spinach, sautéed chopped onions, sautéed sliced mushrooms, sautéed red peppers.

Serve omelets for breakfast OR dinner:

For breakfast, nothing beats an omelet with crispy potatoes. Sara is partial to wedges of a large hash browns that have been made from grated Idaho potatoes and cooked in a large skillet until crispy on both sides.

For dinner, Sara recommends serving alongside a tossed green salad (and a glass of wine).

1. In a bowl, whisk eggs with water.
2. Heat a 10-inch non-stick pan over high heat until very hot (approximately 30 seconds). Add the butter, making sure it coats the bottom of the pan. As soon as the butter stops bubbling and sizzling (and before it starts to brown), slowly pour in the egg mixture.
3. Tilt the pan to spread the egg mixture evenly. Let eggs firm up a little, and after about ten seconds shake the pan a bit and use a spatula to gently direct the mixture away from the sides and into the middle. Allow the remaining liquid to then flow into the space left at the sides of the pan.
4. Continue to cook for another minute or so until the egg mixture holds together.
5. FOR AN AMERICAN 2-FOLD OMELET: While the middle is still a little runny, place the filling on one side of the omelet. Fold the other side on top (like a book). Allow to cook until cheese melts. Serve.
6. FOR A FRENCH 3-FOLD OMELET: While the middle is still a little runny, place the fillings on the center of the omelet. Tilt the pan to one side and use the spatula to fold approximately one third of the omelet over the middle; allow cheese to melt. Shake the pan gently to slide the omelet to the edge of the pan. Holding the pan above the serving plate, tip it so the omelet rolls off, folding itself onto the plate. The two edges will be tucked underneath.

Sara is also sharing a recipe for an Asparagus and Goat Cheese Omelet from her cookbook, "Sara's Secrets for Weeknight Meals," (Broadway Books, 2005).