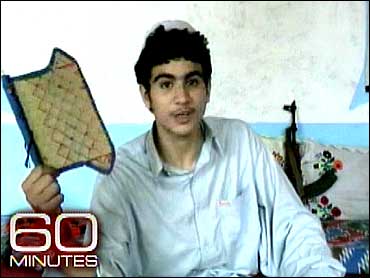 Omar Khadr seems an unlikely poster boy for the war on terror. Khadr is a Canadian citizen, he likes Harry Potter, and he was only 15 years old when he was captured by the U.S. Army in Afghanistan. And that's what makes his case so controversial: his age.

As correspondent Bob Simon reports, Omar Khadr is the only person in modern history to be charged for war crimes he allegedly committed while a minor.

60 Minutes got a rare glimpse into a Guantanamo case -- one of the first that will be prosecuted. Consider this: is Omar Khadr a hardened terrorist -- a bad seed, or an obedient son, led astray by his family?


The U.S. accuses Omar Khadr of murdering an American soldier, conspiracy, spying and more, all done, they say, when he was just 15 years old. Khadr has been detained in Guantanamo Bay for five years, much of it in a maximum security prison, in a cell with no windows, awaiting a military trial. His lawyers say that due to his age when he was taken prisoner, he should have been considered a child soldier and shouldn't be there at all.

As is, the U.S. calls him an unlawful enemy combatant, a euphemism for terrorist. 60 Minutes was not allowed to speak to Omar Khadr. But Dennis Edney, one of his lawyers, has visited him in Guantanamo several times.

But Omar Khadr faces serious charges and, if convicted, could face up to life in prison. He was captured in eastern Afghanistan, a region notorious for harboring members of al Qaeda and the Taliban. In July 2002, U.S. Special Forces were patrolling the area when they got a tip that some al Qaeda members were holed up nearby.

"These guys just shot them point blank in the face," Morris says.

He says two interpreters were killed instantly. And then Sgt. Morris felt something hit his right eye.

"A piece of the hand grenade shrapnel cut the optic nerve," he says. "So I'm blind in one eye."

The fighting went on for hours. By the time it was over, the compound was completely destroyed by 500 pound bombs.

Morris didn't think anybody inside the compound could still be alive. "The assumption was that everybody's dead in there," he says.

But when soldiers went in, someone threw a hand grenade at them. One of the medics, Sergeant Christopher Speer, was killed. Then they found Omar Khadr, barely alive, lying in the rubble and blinded in one eye, just like Layne Morris.

"He's lucky," Morris says. "Because he killed one medic. The second medic saved his life."

Asked if the medic described the kid, Morris tells Simon, "All he said was, 'Man, we got up on that kid and he begged us to kill him.' He said 'Just kill me.'"

And he said it in perfect English.

The U.S. Department of Defense declined to give 60 Minutes an interview about the Khadr case, so Simon spoke to retired General John Altenburg, a lawyer who reviewed the initial evidence against Khadr and counseled the military to put him on trial for war crimes.

"I understand that the evidence reveals that a grenade was thrown over a wall, but that nobody saw him throw it," Simon remarks.

"I think it's fair to say that no person saw him actually throw the grenade," Altenburg replies.

So why the charges?

Says Altenburg, "Because there is circumstantial evidence that would indicate he was the one who threw the grenade."

Meaning no one else was found alive who could have thrown it.

Evidence like images caught on a videotape, found in the rubble after Khadr was captured. A man seen in the video is teaching the other men how to attach detonation wires to land mines. Also seen on the tape is a young man who appears to be Omar Khadr, helping put together a firing device.

Later in the videotape, you can see the land mines being planted in the ground, in the dark, most likely aimed at American soldiers.

Abdurrahman Khadr, one of Omar's older brothers, says Omar was in that compound that day because his father had sent him there.

Abdurrahman Khadr lives in Canada. He, too, was brought up as a Muslim extremist but, he says, he switched sides and worked with the CIA after 9/11. In spite of the videotape, he believes Omar went to the compound to act as a translator, not a fighter.

"He was sent there by my father and as an obedient kid and he said okay," Abdurrahman Khadr says.

And that is the heart of Omar Khadr's defense, his lawyers say: that he had no choice because he had been indoctrinated since earliest childhood to be a good soldier for Allah and an obediant son.

"When you look at the strict culture he's from, you don't challenge your elders," Edney says. "So when his father tells the 15 year old boy, 'You're going with these three men and you're going to be a translator,' that's what the boy does."

That, and everything else his father tells him to do. His father was Ahmed Said Khadr, a radical Muslim who had fought with the Mujahadeen against the Russians.

He was born in Egypt, then emigrated to Canada, and in 1993 moved his family to Afghanistan, where he ran a series of orphanages for Afghan children.

He brought up Omar the way he brought up a group of orphans, to believe there is only one way, the Muslim way, and that the dream of every young man should be getting to paradise by dying as a martyr. A video of Ahmed and the orphans was made in 2001, when the late George Crile, a 60 Minutes producer and author, went to Afghanistan to report on the world of extremist Muslims.

By this time, Omar Khadr's father was not only a well known relief worker, he was on a U.N. list of those associated with terrorism.

Asked if he was a terrorist, Ahmed Khadr told Crile in 2001, "I am not a terrorist."

Not a terrorist, he said, but he fervently believed that Afghanistan should be a Muslim state and that the United States was the enemy of Islam. "It looks like after we have removed the Russian Empire, we'll have to end up removing also the American Empire," Ahmed Khadr told Crile.

He said that just three weeks before 9/11, an event Omar's father claimed he didn't take part in, but didn't seem to feel sorry about, either.

"When September 11th happened, my dad was like, 'Yes, we attacked the enemy,'" Abdurrahman Khadr recalls. "For him, when he says 'We,' he doesn't mean we, our family, he means we, Islam."

"It was Islam taking revenge against the United States?" Simon asks.

"Yes. And that's what he believed," Abdurrahman Khadr explains.

The six Khadr children grew up among other Arabic speaking families in Afghanistan, including the bin Ladens. They knew Osama bin Laden's children and sometimes played together. They even lived on and off in the same compound as Osama.

Asked if he looked up to Osama bin Laden, Abdurrahman Khadr tells Simon, "It was amazing to meet the person who was the most wanted person in the world. The minute he walked into the room and I was like, 'Wow, I just saw this person in the magazine and now he's right here in front of me.' It was like a superstar, I think."

Some of the Khadr boys also went to summer training camps run by bin Laden,
something Abdurrahman says all the Arab kids in Afghanistan did. "Going to the camps, training camps is, like, for kids here to go to a hockey camp," he says.

He describes his family as sympathetic to the Taliban and al Qaeda, but not hardcore members of either. "We socialized with them more than had like business. My dad had some business deals with Osama. But not the rest of the family," Abdurrahman Khadr says.

But he acknowledges that they were brought up to fight for Islam.

Violence became part of life for the Khadrs starting in 2001, when the United States rained bombs on Afghanistan, and the Khadr family found themselves in the middle of a jihad, a holy war. Radical Muslims, like the Khadrs, saw this as a great opportunity to fight and die and get to paradise by becoming martyrs for Islam.

In 2002, Omar was captured in the firefight and asked to be killed. And there was more to come. In 2003, a Pakistani army unit attacked a house with suspected al Qaeda members inside. They showed off the bodies of men they had killed. One of them turned out to be Omar's father.

Omar's younger brother, Abdul Karim Khadr, 14 years old, had been in the house with his father. He was shot in the back and paralyzed.

In 2004, the remnants of the Khadr family moved back to Toronto, where George Crile interviewed Abdul Karim and his mother, Maha Khadr.

"Were you in some way sorry that you did not die that day?" Crile asked Abdul Karim.

Sorry, he said, because he was denied the opportunity of getting to paradise, where 72 stunning virgins would await him. "Somebody would look at them like for 40 years and he would stay looking and looking," Abdul Karim said.

"Because they're so beautiful?" Crile asked.

"Yeah," the teen replied. "And one piece of her perfume would come it would, you wouldn't smell anything but that."

"Mrs. Khadr, can you explain the concept of the virgins for the brothers?" Crile asked Maha Khadr.

"Yes. They talk about it day and night. And sometimes, some wives would get so, you know, kind of annoyed or they say, 'Well is this all you're fighting for?' You know? Because they really just go in too much details about the description," she replied.

Abdul Karim said he even offered to become a suicide bomber. "I told my father, 'Just give me a belt and I'll blow myself up. I'll go and just do anything,'" he said.

As for his brother Omar, Abdul Karim believed he'd get out of Guantanamo and get even. "When he's all right again he'll find them again … and take his revenge," he said.

That was in 2004. Today, the Khadrs have changed their tune. In their small apartment in Toronto, they no longer speak about Omar taking revenge.

His mother says she just wants him to come home. "I pray that he's just, I see him alive standing in front of me," Maha Khadr tells Simon. "I don't want him to be brought back in a plastic bag. Terrifies me very much."

General Altenburg says that even though Omar Khadr is accused of murdering an American soldier, because of his age the U.S. will not ask for the death penalty.

"Is there anything in his case that bothers you?" Simon asks.

"Bothers me in what way?" Altenburg replies.

"Just bothers you that either he should be considered a child soldier or shouldn't be mixed with other adults?" Simon asks.

"I'm concerned that anybody that age is on a battlefield, but once there and once doing the types of things that he was doing, I think that the system should probably prosecute him the way they are," Altenburg says.

And that is as an adult and a terrorist. And even if Omar Khadr is exonerated to some extent at his trial, the United States does not have to let him go until the war, this war on terror, is over.

Out of the 305 detainees in Guantanamo, Omar Khadr's case will be only the second to be prosecuted. The U.S. says an eyewitness has recently provided new evidence that could bolster Khadr's defense.

The Wrights: A family of saddle bronc riders