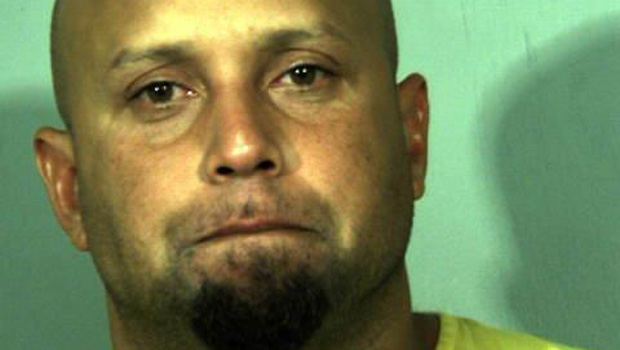 WASHINGTON -- Investigators found more than 800 rounds of ammunition in the car of the man accused of scaling the White House fence and sprinting inside the building, a federal prosecutor said Monday. A machete and two hatchets also were found.

The accused intruder, former soldier Omar J. Gonzalez, had been arrested earlier in the summer in Virginia with a carful of weapons, authorities said, and the federal prosecutor said Monday in court that Gonzalez had had a map with the White House and the Masonic Temple in Alexandria circled.

CBS News' Paula Reid reports that Gonzalez entered the courtroom in an orange jumpsuit and was unrestrained, but escorted by two guards.

Assistant U.S. Attorney David Mudd declared that Gonzalez was a "danger to the president." Gonzalez, who was carrying a knife, was arrested just inside the White House front door.

President Barack Obama and his family had left the White House for Camp David Friday evening when the incident occurred. Obama's spokesman said Monday that the president was "obviously concerned" about what happened.

At a hearing Monday for Gonzales, Mudd said the man was already under indictment in Virginia, accused of having a sawed-off shotgun and eluding police in a case this summer.

Saliba said Gonzalez initially tried to flee troopers, weaving and driving off the road into a highway median. Gonzalez was arrested at the scene after a trooper found the illegal shotgun in his car. The ammunition and weapons, including a tomahawk, were seized.

In Washington, the Secret Service increased its security on Monday around the perimeter of the White House, the presidential residence and one of the government's enduring symbols, while investigating how officers had allowed the incident to happen.

The breach led to a rare evacuation of much of the White House Friday evening.

White House spokesman Josh Earnest said the Secret Service investigation will include a review of protective efforts both inside the White House grounds and outside the fence line along Pennsylvania Avenue, including staffing and threat assessment policies and procedures.

A law enforcement source told CBS News senior investigative producer Pat Milton that one of the primary questions being raised as the Secret Service conducts its internal review of the case is why the uniform division of the U.S. Secret Service, whose duty it is to protect the White House, failed "to execute" a comprehensive plan that is in place for such incidents.

A major issue is why the dogs were not released, which is a pertinent to the plan in cases such as this, the source said. The dogs are safe and fast, and weapons don't need to necessarily be fired.

The fence jumper, the source said, should have been caught within feet of where the intruder landed, a routine that is regularly followed and has been extremely effective during numerous fence jumping incidents in the past by the Secret Service elite tactical team that protects the White House.

Gonzalez, a 42-year-old Army veteran from Copperas Cove, Texas, faces charges of entering a restricted building or grounds while carrying a deadly or dangerous weapon. The Army says Gonzalez served from 1997 until his discharge in 2003, and again from 2005 to December 2012, when he retired due to disability.

Homeland Security Secretary Jeh Johnson said he would ultimately review the findings of the investigation ordered by Secret Service Director Julia Pierson. Johnson said the public should not rush to judgment about the security breach and urged against second-guessing security officers whom he said "had only seconds to act."

The Secret Service didn't open fire on Gonzalez or send attack dogs after him.

Officers who spotted Gonzalez scale the fence quickly assessed that he didn't have any weapons in his hands and wasn't wearing clothing that could conceal substantial quantities of explosives, a primary reason agents did not fire their weapons, according to a U.S. official briefed on the investigation.

Another consideration was whether bystanders behind the fence could have been injured by errant gunfire, said the official, who was not authorized to discuss the investigation by name and spoke only on condition of anonymity.

The Secret Service has long tried to balance public access to the "People's House" and security of the presidential residence.

The two-block stretch of Pennsylvania Avenue in front of the White House's north gates has been closed to vehicle traffic since May 1995, when President Bill Clinton ordered the immediate closure of the road in an effort to prevent a potential car- or truck-bomb attack.

On any given day, numerous uniformed officers can be seen patrolling parts of the sprawling lawns on either side of the White House, and others are stationed along the fence line on Pennsylvania Avenue. Monday morning, several officers patrolled the fence line, including one with a dog.

But the pedestrian-only zone hasn't entirely prevented security breaches along the fence or Pennsylvania Avenue.

Last September a man was arrested and accused of throwing firecrackers over the fence on the north lawn, near the area where Gonzalez is accused of climbing over the barrier. The Secret Service at the time said the man with firecrackers did not pose a threat.

A few weeks later a Connecticut woman set off a police chase through downtown Washington after ramming a security checkpoint near the White House. Miriam Carey, 34, was shot and killed by police near the Capitol.

In May, a man was arrested after he followed a motorcade carrying President Obama's daughters through the gates into the secure area near the White House. He had a pass for the Treasury Department, which is next door to the White House and also inside the pedestrian-only security zone. A charge of unlawful entry was later dismissed.

And in August a toddler managed to slip through the slats in the metal fence surrounding the White House. The Secret Service joked that they would wait until the boy learned to talk before questioning him.

Less than 24 hours after Gonzalez's arrest, a second man was taken into custody after he drove up to a White House gate and refused to leave, Secret Service spokesman Ed Donovan said. Bomb technicians in full gear searched the vehicle as agents briefly shut down nearby streets.

There was no indication the two incidents were connected. But they only intensified the scrutiny of the Secret Service, which is struggling to rehabilitate its image following a series of allegations of misconduct by agents in recent years, including agents on Obama's protective detail.

Sen. Tom Carper, D-Del., chairman of the Homeland Security and Government Affairs Committee, said he had spoken with Secret Service Director Pierson and was encouraged she would ensure the agency would use the incident as a "learning opportunity to reduce the likelihood that something of this nature will happen again."

It's just the latest in a series of embarrassing slip-ups that have exposed glaring deficiencies in the agency's protection of the president and the first family.

In 2012, more than a dozen agents and officers were involved in a prostitution scandal during President Obama's trip to Cartagena, Colombia. And in March this year, three Secret Service agents were sent home from Amsterdam ahead of a presidential trip there after an episode involving public intoxication.