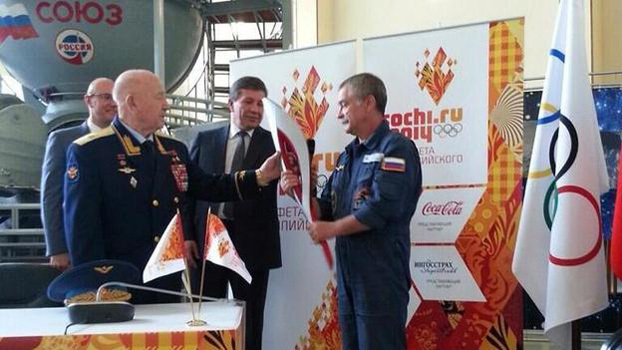 The Olympic Torch Relay is heading to new territory. According to the president of Russia's Sochi Olympic Committee, cosmonauts will soon carry the torch into outer space. The Eurasian nation will host the Winter Olympic Games in February 2014.

Announcing the mission via Twitter, Dmitry Chernyshenko said, "Our ambition to conquer Space 1st time ever in the Olympic history becomes reality ... #2014Sochi's Torch Relay will reach the open space!"

On November 29, Expedition 38 crew members will carry the torch to the International Space Station aboard flight Soyuz TMA-11M. The flight crew includes Russian Federal Space Agency cosmonaut Mikhail Tyurin, NASA astronaut Richard Mastracchio and Japan Aerospace Exploration Agency astronaut Koichi Wakata. An imitation flame will replace the official flame during the spaceflight, because having an open flame on a spaceship would be dangerous.

After the mission, the torch will be used to light the cauldron at the Opening Ceremony of the Games on February 7, 2014, Chernyshenko said.

Chernyshenko took to Twitter again this morning, this time posting a photo of himself in a spacesuit. "Nothing is impossible... #Sochi2014 is going to the Space :-) Let's Go - Po-ekhali!" he tweeted.