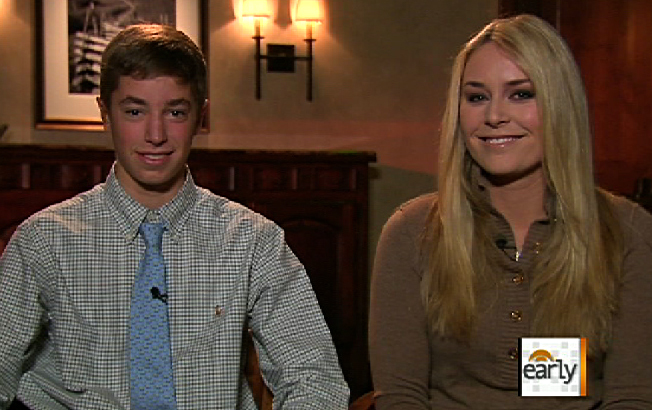 One high school student in Vail, Colo., showed Friday that celebrities aren't out of the everyman's league.

Parker McDonald, a sophomore at Vail Ski and Snowboard Academy, asked Olympic gold medalist skier Lindsay Vonn to his homecoming dance Saturday night. The idea, McDonald said on "The Early Show," hit him "out of the blue."

McDonald said, "I was sitting there at lunch and I didn't have a date and all my friends were asking who was I going to take to homecoming. And Lindsey Vonn was sitting a couple tables away."

When asked if it was his friends' egging him on to ask the 27-year-old athlete, McDonald replied, "No. I don't go under peer pressure like that."

McDonald said he just walked up to the skier and asked her out to the event. "I said, 'What are you doing tomorrow night, because there's a dance,"'he recalled. "'And I was wondering if you wanted to go with me."'

Vonn said she was hesitant about the whole request at first. "I was like, 'What exactly is this going to be, and what time?"' Vonn said. "And I just had to pause for a minute. But Parker was such a gentleman and he asked me so politely that I just -- I couldn't resist his face."

Vonn said this was the first school dance she's ever attended.

"When he asked me, you know, that kind of ran through my head," Vonn said. "I'd never been to a school dance. So it was my first time, and Parker was, like I said, a complete gentleman, and it was a great night."

The pair made quite an entrance, with Vonn driving the pair -- and a bunch of his friends -- to the dance.

Vonn said, "He invited me over to his friend's house for, like, the family pictures and stuff. So I went over and then I -- pretty much all the kids wanted to ride in my car over to the dance, so I think we may have fit a few too many kids into my car, but my Audi definitely handled it well. But we pulled up in style."

McDonald added, "We made an entrance."

The pair also stepped out onto the dance floor. Vonn said the dancing was "definitely quite a bit better" than it was when she was in high school.

She added, "Parker had some pretty good moves. ... It was definitely a fun night."

McDonald isn't the only "regular" person to ask a celebrity to an event. Mila Kunis and Justin Timberlake have both been asked to be an escort in recent months.