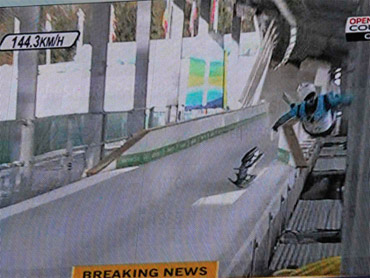 A men's Olympic luger from the country of Georgia died Friday after a high-speed crash on a track that is the world's fastest and has raised safety concerns among competitors. A tearful IOC president Jacques Rogge said the death hours before the opening ceremony "clearly casts a shadow over these games."

Paramedics and doctors were unable to revive the 21-year-old luger, who died at a hospital, the International Olympic Committee said.

"We are heartbroken beyond words," said John Furlong, chief executive of the Vancouver organizing committee.

Before speaking at a news conference, Rogge took off his glasses, rubbed his eyes and said, "Sorry, it's a bit difficult to remain composed."

"Here you have a young athlete that lost his life in pursuing his passion," Rogge added. "He had a dream to participate in the Olympic Games. He trained hard and he had this fatal accident. I have no words to say what we feel."

Rogge said he was in contact with Kumaritashvili's family and officials from the Georgian government. Georgia's Olympic committee was deciding whether to remain in the games, Rogge said.

Photos: Tragedy at the Olympics

An investigation into the crash started quickly, although Rogge said this was not the time to talk about it. The men's luge competition is scheduled to begin Saturday afternoon. Officials at the Whistler track said they were uncertain if the schedule would be affected.

Glor reports that there are serious discussions taking place about whether this year's luge competition should be changed, possibly to a lower starting point, which would decrease speeds.

Rescue workers were at Kumaritashvili's side within seconds. Chest compressions and mouth-to-mouth resuscitation started less than one minute after the crash, and he was quickly airlifted to a trauma center in Whistler.

Kumaritashvili struck the inside wall of the track on the final turn. His body immediately went airborne and cleared the ice-coated concrete wall along the left side of the sliding surface. His sled remained in the track, and it appeared his helmet visor skidded down the ice.

The remainder of men's training was canceled for the day, with VANOC officials saying an investigation was taking place to "ensure a safe field of play." Men's luge competition is to begin Saturday. It's unclear if the schedule will change.

The danger of the Whistler track has been talked about for months - particularly after several nations, including the U.S., were upset over restrictions regarding access to the facility by nations other than Canada, with some noting it could lead to a safety issue.

Luge is already one of the most dangerous sports in the world - so fast it's the only winter Olympic sport timed to a thousandth of a second, reports Glor.

Kumaritashvili is the fourth competitor to die at the Winter Games and the first since 1992.

"It's a very rare situation," three-time Olympic champion and German coach Georg Hackl said before learning of the death, clearly shaken after seeing Kumaritashvili tended to furiously by medical workers.

Shortly before the accident, Hackl said he didn't believe the track was unsafe.

"People have the opinion it is dangerous but the track crew does the best it can and they are working hard to make sure the track is in good shape and everyone is safe," he said. "My opinion is that it's not anymore dangerous that anywhere else."

(AP)
(Above: A large video screen in the finish area of the Alpine skiing venue shows the crash of Nodar Kumaritashvili of Georgia during men's singles luge training.)

Five-time Olympian Mark Grimmette, chosen as the U.S. team's flag bearer, said the speeds on the track are pushing the boundaries of safety.

"We're probably getting close," he said the night before the death. "This track is fast and you definitely have to be on your game. ... So it's definitely something they are going to have to take into account on future tracks."

"When I hit that ice going 90 mph it turns into fire," Niccum said Thursday. "I remember coming around to the finish and I just wanted to rip off my suit, 'I'm on fire. I'm on fire."'

This was Kumaritashvili's second crash during training for the games. He also failed to finish his second of six practice runs, and in the runs he did finish, his average speed was about 88 mph - significantly less than the speed the top sliders are managing on this lightning-fast course.

Many sliders have exceeded 90 mph on this course. More than a dozen athletes have crashed during Olympic training for luge, and some questioned whether athletes from smaller nations - like Georgia - had enough time to prepare for the daunting track.

At the finish area, not far from where Kumaritashvili lost control, athletes, coaches and officials solemnly awaited word on Kumaritashvili before eventually being ushered away. Access to the crash area was closed within about 30 minutes.

"I've never seen anything like that," said Shiva Keshavan, a four-time Olympian from India.

Representatives from the three U.S. sliding federations were to release a joint statement later Friday. American athletes were not immediately made available for reaction after news of the death was confirmed.

"My thoughts and prayers are with the Georgian Olympic team," U.S. bobsled pilot Steven Holcomb said on Twitter. "The sliding community suffered a tragic and devastating loss to our family today."

"RIP Nodar Kumaritashvili," wrote American skeleton athlete Kyle Tress, who did not qualify for the Olympic team. "Let's never forget how dangerous these sports can be."

Earlier in the day, gold-medal favorite Armin Zoeggeler of Italy crashed, losing control of his sled on Curve 11. Zoeggeler came off his sled and held it with his left arm to keep it from smashing atop his body. He slid on his back down several curves before coming to a stop and walking away.

Training days in Whistler have been crash-filled. A Romanian woman was briefly knocked unconscious and at least four Americans - Chris Mazdzer on Wednesday, Megan Sweeney on Thursday and both Tony Benshoof and Bengt Walden on Friday in the same training session where Zoeggeler wrecked - have had serious trouble just getting down the track.

"I think they are pushing it a little too much," Australia's Hannah Campbell-Pegg said Thursday night after she nearly lost control in training. "To what extent are we just little lemmings that they just throw down a track and we're crash-test dummies? I mean, this is our lives."

At the 1992 Albertville Games, Nicholas Bochatay of Switzerland died after crashing into a snow grooming machine during training for the demonstration sport of speed skiing on the next-to-last day of the games. He was practicing on a public slope before his event was to begin.

Australian downhill skier Ross Milne died when he struck a tree during a training run shortly before the 1964 Winter Games in Innsbruck, Austria. British luger Kazimierz Kay-Skrzypecki also died in a crash during training in Innsbruck.

At the 1988 Calgary Games, an Austrian team doctor, Jorg Oberhammer, died after being hit by a snow grooming machine.

Until today's accident all the talk was about the weather, reports Glor. Two days of ski practice runs have been postponed due to poor visibility caused by fog and rain.