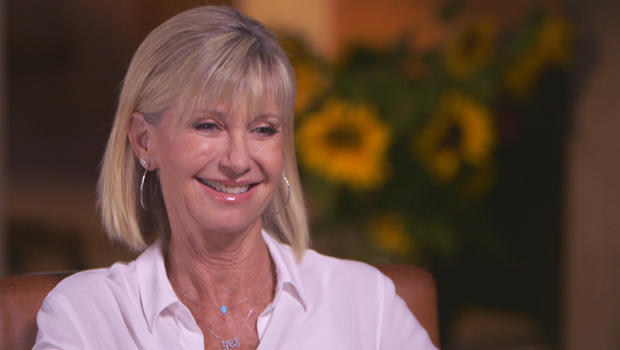 This story was originally broadcast on September 29, 2019.

Fearless is a fitting description for Olivia Newton-John, especially during an off-road tour of her California ranch with "CBS This Morning" co-host Gayle King, to visit her miniature horses, Harry and Winston. The horses ease her mind, just as the marijuana buds growing in cups nearby ease something else. The pain, she said, is really bad: "Crying kind of pain."

The pain can be unbearable, but the spirit remains unshakable, as the English-Australian superstar battles breast cancer for a third time.

King asked, "How do you stay in the moment and stay present and not let it consume you and worry you?"

"Denial is really good!" Newton-John laughed. "It's really healthy! But it was consuming my day. And after a time, I went, 'You know what? I don't know what my time is, but I need to enjoy my life. So, I'm going to eat a cookie if I want it. And I'm gonna have a cup of tea if I want it. And if I wanna have a little bit of wine, I'm gonna do that.' Because the joy of life and everyday living has to be a part of that healing process as well."

Finding joy in life – it's not surprising for someone who brings so much of it to the world, and for so long. It's hard to remember a time when Olivia Newton-John wasn't in the spotlight. A four-time Grammy Award-winner, she's sold 100 million albums with songs like "I Honestly Love You," and "Have You Never Been Mellow."

There's also her film career, and her role as Sandy opposite John Travolta's Danny in the 1978 blockbuster, "Grease."

The musical was a game-changer for her. She was 28 at the time of "Grease." Fifteen years later, at age 43, Newton-John's seemingly charmed life forever changed when she felt a lump during a breast self-examination.

That was not the only devastating news that day: She was diagnosed on the same day as the death of her father. "I had a daughter, I had a child to care about," she said. "And that was my focus. You know, 'I've gotta get through this for her.'"

Following chemotherapy, she was declared cancer-free, until she learned it spread to her back in 2013.

But, she said it has not made her angry.

"Help me understand how you're not angry," asked King. "I would think so many people would be angry and frustrated and sad – Why me?"

Newton-John said, "Why me? has never been a part of it. But I never felt victimized. I never felt, 'Why not?' Maybe deep down I knew there was a reason or a purpose for it. Or maybe I needed to create one to make it okay for myself. Because, again, it's a decision – How am I gonna deal with it?  You choose."

The cancer went into remission.

But two years ago, it returned again. She was told it's stage four.

King asked, "What did the doctors say to you about your prognosis now?"

"Prognosis? I don't discuss prognosis," she replied. "Because, in my opinion, if they give you a percentage or, you know, 'This many women get this and they live this long,' you can create that and make it happen. It's almost like, I think I know what the statistics are. But I put them away. I'm gonna live longer than that. I've made that decision."

"Is death something that you think about?" King asked.

'Try not to. But you have to think about it. I mean, it's part of life. And, of course, if you have a cancer diagnosis, your death is kind of there. Whereas most people, we don't have a clue when we're gonna die. And I could die tomorrow – a tree could fall on me. So, it's just that we have that knowledge that we could die.

"But I try not to think about it too much, but I try to mediate and be peaceful about it, and know that everyone I love is there, so there's something to look forward to."

Newton-John spends most of her time at home, with her husband, John Easterlng. She calls him "Amazon John." He's an advocate for the healing powers of plants, especially cannabis, like the ones he grows especially for her.

"He is the crown prince," she said. "He's just a good, seriously, a good human being and a kind human being, an incredibly smart human being. And he's gorgeous to boot!"

Retired from performing, she's an activist and philanthropist. She founded the Olivia Newton-John Cancer Wellness & Research Centre in Melbourne.

Last November, her most famous costumes were auctioned off for $2.4 million, with some of the proceeds going towards her center. The items included clothes from the movie "Xanadu"; a Pink Ladies jacket from "Grease"; and the unforgettable black outfit from that movie's closing number:

King said, "I don't know how you got in them. That's what I would like to know."

"Well, you know, I was a pretty skinny girl! And they were the perfect fit for me, except the zip was broken, so they would stitch me into them."

"So, what would happen if you had to pee?"

"They'd have to unpick it, and then sew me back in, so I would try not to drink too much."

Skin-tight back then – but could she get into them now?

"Well, they live again!" Newton-John laughed. "Only you could get me to do this again!"

Olivia Newton-John is the only one, with the style and the smile, and so much strength.

"It's a decision how you choose to feel about something. So, I've chosen that path," she said. "I'm happy. I'm lucky. I'm grateful. I have much to live for. And I intend to keep on livin' it."