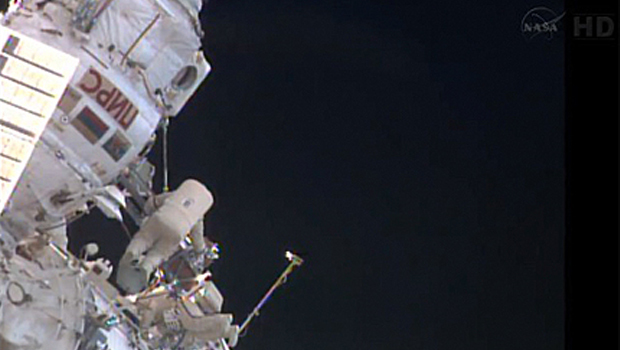 Veteran cosmonauts Pavel Vinogradov and Roman Romanenko ventured outside the Russian segment of the International Space Station last Friday, installing a space weather monitor and replacing a navigation aid before wrapping up a six-hour 38-minute spacewalk.

During a final task, Vinogradov, one of the most experienced cosmonauts in the Russian space program, and at 59 the oldest man to walk in space, lost control of a materials science space exposure experiment panel after retrieving it from the hull of the station. The panel floated away behind the lab complex and was quickly lost in space.

The panel of metal samples was one of two making up the "Vinoslivost," or "endurance," experiment. It was installed on the Russian Poisk module last year to expose a variety of materials to the space environment for later analysis.

During Friday's spacewalk, the cosmonauts intended to retrieve one of the two Vinoslivost panels. But Vinogradov somehow lost his grip.

"The panel slipped off and flew away!" Vinogradov called, according to a translator. "It slipped off the ret."

"Pavel, am I understanding correctly, the panel slipped off the ret and flew away?" a Russian flight controller asked.

Study: Pollution is one of the world's biggest killers

After discussing the panel's trajectory, someone said: "It's unfortunate. What can you do?"

Ballistics engineers at the Johnson Space Center in Houston said the panel, measuring 12-by-18 inches and weighing about 6.5 pounds, departed on a trajectory that would not result in any chance of a collision during subsequent orbits. Instead, the panel will slowly lose altitude due to atmospheric drag and eventually burn up in the atmosphere.

Wearing Russian Orlan spacesuits, the cosmonauts opened the hatch of the Pirs airlock module at 10:03 a.m. EDT (GMT-4) to officially kick off the spacewalk, the first of up to eight excursions planned for 2013.

A few minutes later, Romanenko and Vinogradov floated outside as the space station sailed into an orbital dawn 250 miles above the south Pacific Ocean.

Working smoothly through their timeline, Vinogradov and Romanenko installed an instrument package known as "Obstinofka," or "environment," on the forward part of the Zvezda command module and deployed two antenna-like detectors to study the electrically charged plasma wave environment and its interaction with the ionosphere.

They also replaced a laser retro-reflector on the back end of Zvezda that is part of a system approaching European cargo ships use to home in on the command module's aft docking port. The European Space Agency's Einstein Automated Transfer Vehicle is scheduled to arrive in June.

Vinogradov and Romanenko returned to the Pirs module and closed the hatch at 4:41 p.m., officially ending the spacewalk. Hatches that had been closed to isolate the Zvezda and Pirs modules from the rest of the station then were re-opened.

"I don't understand how it just slipped off," a Russian, presumably Vinogradov, said as the cosmonauts repressurized the Pirs module.

"Well, that's unfortunate, you know. There was so much work and effort invested into this panel, and it just slipped off."

This was the 167th spacewalk devoted to station assembly and maintenance since construction began in 1998, the first EVA of 2013, the seventh for Vinogradov and the first for Romanenko, a second-generation cosmonaut whose father logged four spacewalks.

Up to five more Russian spacewalks are planned for 2013, along with two U.S. excursions on tap this summer.