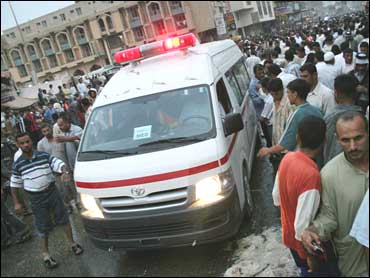 This week, CBS News Sunday Morning's John Leonard has something to say about movie re-makes, and warns us away from a film that is not the comedy you might think it is.

First, there was Here Comes Mr. Jordan with Robert Montgomery as a boxer who died before his time and came back in another body.

Then, Heaven Can Wait with Warren Beatty as a football player.

And now, Down to Earth with Chris Rock as a comedian. Like teabags or carbon paper, we reach a point of diminishing returns.

As a standup comic, Chris Rock has some left-field edginess and a brilliant squawk. As a lie-down-and-get-hit-by-a-truck hero of Down to Earth, he is full, instead, of sappy surprise. It was not a shrewd career move.

Thanks to the big truck, suddenly, instead of getting booed off the stage at the Apollo, the young comic is lining up to get into a Heaven that looks like a Las Vegas nightclub, where Chazz Palminteri tries to rectify Eugene Levy's mistake. This means that Rock jumps into the fat old white body of a recently dead billionaire. Which makes it hard to get a date with Regina King, who wants to save a Brooklyn hospital from being HMOed. But he does get to rap around uptown in a cool car with a confused butler.

Someday, somebody will explain to me why subversive comics like Richard Pryor, Robin Williams, and Whoopi Goldberg end up trying too hard in bubble-gum movies. If Lenny Bruce were still alive, can you imagine him as Robin Hood in Crouching Tiger, Inner Child?

On the other hand, I'd rather not know what Kevin Costner and Kurt Russell thought they were doing in 3,000 Miles to Graceland.

From the TV commercials, you'd think Graceland was supposed to be a funny heist movie. Instead, at an Elvis convention in a Las Vegas casino, the heist is over in the first half hour, with dozens of corpses.

Many other semi-famous actors also appear in 3,000 Miles to Graceland, and almost all o them wind up dead. Only the closing credits, with outtakes during which Kurt sings Elvis, are actually giggle-making.

Maybe everybody in Las Vegas is already dead. And maybe Elvis should come back as Elvis. Toward the end, he certainly needed a new body.