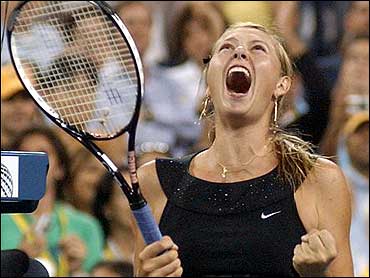 yes Texas-size legal battle gets under way this week when former Playboy Playmate Anna Nicole Smith goes to court seeking half of her late nonagenarian husband's billion-dollar estate. Lawyers are set to make opening arguments this week in a lawsuit where Smith says oil tycoon Howard Marshall promised her half of his $1.6 billion fortune to marry after they met in a Houston topless bar.

Pop diva Whitney Houston has remained silent on a decision by Hawaiian prosecutors to charge her with possessing about half an ounce of marijuana. Houston has been given until Oct. 26 to appear in Hawaii's Kona District Court to contest the charges which are punishable by a maximum 30 days in jail or $1,000 dollar fine.

In a rare reunion, the three surviving members of 1960's rock band The Doors teamed up with several guest vocalists earlier this week to perform their classic tunes for an upcoming television special. The taping at a Hollywood soundstage marked the first time that keyboardist Ray Manzarek, guitarist Robby Krieger and drummer John Densmore have performed publicly since 1993, when they were inducted into the Rock and Roll Hall of Fame. Incidentally, fans of late rocker Jim Morrison need not worry that the Doors singer will be disinterred next year when the lease on his Paris grave runs out. Morrison's former colleagues in the Doors said recently they are confident the French government will allow him to continue resting in peace at the famed Pere Lachaise cemetery.

The man who gunned down John Lennon two decades ago says he deserved to be executed for murdering the former Beatle but that Lennon, being a liberal, would probably have wanted him to be released from prison. In an interview published this week, Mark David Chapman also described in chilling detail how he posed as an autograph seeker to get close to the musician outside his New York apartment building on Dec 8, 1980, and shot him in the back.

Clearly relishing his last months in office, President Clinton joined movie star Denzel Washington for the premiere of a film in which he portrays the coach who integrated a local high-school football team and led it to the state championship. "I was watching this and thinking back over the last eight years," Clinton said after screening Remember the Titans. "I was just thinking that if only we could learn over again every day the lessons these young men...learned from each other."

Jeffrey Archer, the millionaire British novelist and one-time golden boy of the Conservative Party, made his stage debut late this week to rapturous applause, only hours after he was charged with perjury. Archer, also charged with perverting the course of justice in relation to a 1987 libel trial, made his debut in Windsor in a play entitled The Accused,> which he wrote himself.

In one of the highest sums paid an actor in his first starring role, Universal has closed a $5.5 million deal with World Wrestling Federation champ the Rock (aka Dwayne Johnson) to play the title role in The Scorpion King. Shooting on the PG-13 film begins in mid-March. The deal is 'pay or play,' meaning the Rock gets paid even if the movie doesn't get the go ahead.

Irish rock band U2 will play a rooftop gig in Dublin this week, evoking memories of the band's famous performance on a hotel roof in Los Angeles 13 years ago. The veteran musicians will take to the roof of their own hotel, the Clarence, to record a video for two new songs, "Beautiful Day" and "Elevation," from their upcoming album All That You Can't Leave Behind, a spokeswoman said.

Gwyneth Paltrow is near a commitment to star for Miramax in View From the Top, a romantic comedy to be directed by Oscar-nominated Brazilian filmmaker Bruno Barreto. The film, about a small-town woman trying to achieve her goal of becoming a flight attendant, is being cleared for takeoff as her next film.

Now it can be told: Tom Cruise, Penelope Cruz and Cameron Diaz will open their eyes in Cameron Crowe's Vanilla Sky. Outside of being a romance, the content of Vanilla Sky had been kept under tight wraps. The picture will be an adaptation of the Spanish-language romantic thriller Abre los ojos (Open Your Eyes), a 1997 film that was written and directed by Alejandro Amenabar and starred Cruz.

Jennifer Beals and Karyn Parsons will star in 13 Moons, a relationship comedy to be shot in digital video. The ensemble picture follows one full-mooned night in the lives of eight people as viewed through events in a bail bondsman's office. The title refers to the unusual occurrence of a 13th moon in one calendar year.

Roberto Baden Powell, one of the pioneers of Brazil's world famous bossa nova music, died recently of multiple organ failure following pneumonia complications at the age of 63, doctors said. Baden Powell died at Rio de Janeiro's Sorocaba Clinic, where he was in intensive care for the past month with pneumonia and health problems related to diabetes.

CBS Worldwide Inc. All Rights Reserved. This material may not be published, broadcast, rewritten, or redistributed. The Associated Press and Reuters contributed to this report