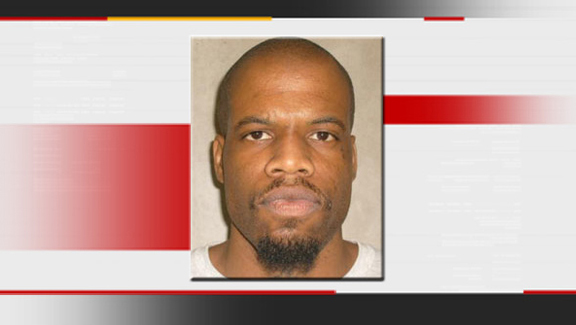 McALESTER, Okla. - The execution of a convicted murderer was halted Tuesday night when the delivery of a new lethal injection combination was botched, but the man died later of a heart attack, the head of the Oklahoma Department of Corrections said.

The execution of Clayton Lockett, 38, began at 6:23 p.m. when official administered the first of three drugs. A doctor declared Lockett to be unconscious at 6:33 p.m.

About three minutes later, however, Lockett began breathing heavily, writhing on the gurney and straining to lift his head from the pillow. The condemned man could be seen speaking, CBS affiliate KOTV in Tulsa reported.

"It was a horrible thing to witness. This was totally botched," said Lockett's attorney, David Autry.

A doctor then lifted the sheet that was covering Lockett to examine the injection site and determined that his vein had ruptured, said Robert Patton, director of the Department of Corrections.

"There was some concern at that time that the drugs were not having that (desired) effect, and the doctor observed the line at that time and determined the line had blown," Patton said at a news conference afterward.

After that, an official who was inside the death chamber lowered the blinds, preventing those in the viewing room from seeing what was happening.

Patton said he made a series of phone calls before calling a halt to the execution. But at 7:06 p.m., Lockett died of a massive heart attack in the execution chamber.

Gov. Mary Fallin issued a 14-day stay of execution for inmate Charles Warner, who also had been scheduled to die on Tuesday.

"I have asked the Department of Corrections to conduct a full review of Oklahoma's execution procedures to determine what happened and why, during this evening's execution," she said.

Autry, Lockett's attorney, questioned the amount of midazolam that was given to the condemned man, saying he thought that the 100 milligrams called for in the state's execution protocol was "an overdose quantity."

The executions of Lockett and Warner previously had been delayed after they challenged the secrecy behind the state's new lethal injection protocol.

A four-time felon, Locket, was convicted of shooting 19-year-old Stephanie Neiman with a sawed-off shotgun and watching as two accomplices buried her alive in rural Kay County in 1999. Neiman and a friend had walked in as the men were robbing a home.

Warner had been scheduled to be put to death two hours later in the same room and on the same gurney. The 46-year-old was convicted of raping and killing his roommate's 11-month-old daughter in 1997. He has maintained his innocence.

Lockett and Warner had sued the state for refusing to disclose details about the execution drugs, including where Oklahoma obtained them.

The case, filed as a civil matter, placed Oklahoma's two highest courts at odds and prompted calls for the impeachment of state Supreme Court justices after the court last week issued a rare stay of execution. The high court later dissolved its stay and dismissed the inmates' claim that they were entitled to know the source of the drugs.

By then, Fallin had weighed into the matter by issuing a stay of execution of her own - a one-week delay in Lockett's execution that resulted in both men being scheduled to die on the same day.