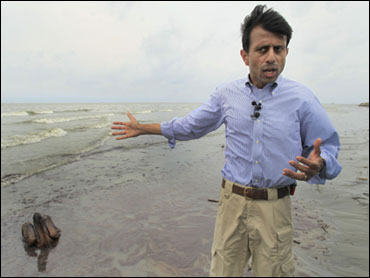 It's a rough schedule for Louisiana Gov. Bobby Jindal, a near daily grind of military helicopter flights or roaring airboat tours to remote steamy marshes and sun-baked barrier islands increasingly endangered by the BP oil spill.

Sweeping sticks or fish nets through chocolate-colored goo to show its cake-batter thickness, Jindal laments a lumbering federal and corporate response to the mess. He repeatedly assures reporters: "We've taken matters into our own hands."

The Republican's rapid-fire command of facts and determination to lead are his second act on the national stage and a chance to erase the memories of his pedantic, sing-songy rebuttal of President Barack Obama's first speech to Congress in February 2009. The 38-year-old, Oxford-educated political prodigy was widely criticized, and suddenly didn't seem like presidential material as he once did.

Since the drilling rig operated by BP PLC exploded in April and unleashed a gusher of oil into the Gulf of Mexico, Jindal has taken pains to rattle off all the state is doing to keep the oil from ruining a way of life. He ticks off lists of projects, how much oil-soaking boom is being used, where barges are being sent.

"We're going to with this war," Jindal said on CBS's "The Early Show" this morning. "This is our way of life. We have no choice but to win this war."

Jindal has lambasted a Democratic administration's response that he says hasn't done enough to protect the state's shores. His own response has resonated strongly with politicians and residents who generally have given him high approval ratings during his two years in office.

"The governor's out there. The governor knows what's going on," said Buggy Vegas, owner of a marina and vacation cabins on Grand Isle, where the oil spill has all but killed tourism and canceled major fishing competitions.

"He's doing an A-plus job," said Rep. Bill Cassidy (R-La.), who has complained that the Obama administration's mitigation efforts were much too slow. "He's attracting national attention to something that was, frankly, on the back burner of the administration."

There have been nay-sayers, including part-time Grand Isle resident Larry Freman. The 72-year-old, who described himself as a Republican and early Jindal supporter, said the governor ought to be spending his time keeping budget negotiations in check at the Capitol.

Some Democrats have derided Jindal's trips as nothing but photo opportunities.

"Getting on a boat in a lifejacket and pointing out the oil on the shore is not being a leader," said state Sen. Karen Carter Peterson, a New Orleans Democrat.

Former Gov. Kathleen Blanco, the Democrat who beat Jindal in 2003 but chose not to seek re-election amid harsh criticism of her response to 2005's Hurricane Katrina, said Jindal "cannot do it himself." But she said he could have taken additional steps to fight the oncoming oil slicks, such as authorizing deficit spending to obtain any equipment needed.

"Act and send them the bill and fight over it later," she said.

Voters jaded by the response to Katrina helped Jindal win the governor's office, and the oil spill could be the disaster that feeds his national ambitions, however unclear they may be. He's made trips for fundraising and political speeches everywhere from California to New York, but flatly told a gathering of Republicans in March that he is not a candidate for president.

It could be months before it's clear how well Jindal has handled this disaster. He guided the state through the devastation of hurricanes Gustav and Ike in 2008, and today tells Louisianans that they will get through this as well.

But Gary Clark, a political scientist at Dillard University said that what Jindal and Louisiana is a whole new entity. "There's a new sort of disaster, with a new set of parameters," said Gary Clark.

Jindal may also have to explain his opposition to a federal moratorium on deepwater offshore drilling, even as oil from the explosion fouls his state's delicate wetlands. That's a position that might be embraced by voters if he were to seek a second term as governor but might not play as well in a presidential bid.

"For someone from Louisiana who understands the reliance on that industry to the state economy, that makes sense," Chervenak said. "For outsiders, it's a head-scratcher."

Still, conservative primary voters in other states may be drawn to his continued support for the oil industry and constant criticism of Obama, Chervenak said.

A big factor in how Jindal weathers the current crisis may hinge on his proposal, recently approved by federal authorities after weeks of pleas from the state, to build miles of sand berms to beef up an eroded system of barrier islands.

Supporters say it will help keep oily Gulf water from reaching more of the state's delicate wetlands. Critics of the plan have questioned if the barriers can be built in time, and if they would survive a hurricane or tropical storm.

Meanwhile, Jindal's window of national media opportunity may be narrowing as larger globs of oil wash up onto beaches in Alabama and Florida.

"The governors of these other Gulf states are going to start getting on television as well," Chervenak said.