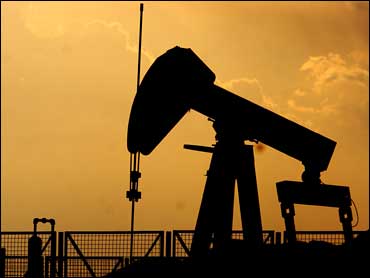 LONDON - Oil prices soared to more than $93 a barrel Tuesday as Libya's uprising spawned violence and chaos that threatened to affect crude production and even spread to other larger OPEC nations in the region.

Libyan leader Moammar Gadhafi's grip on power weakened steadily as the protests spiraled out of control. Key government officials at home and abroad resigned and air force pilots defected amid a bloody crackdown on protests in Tripoli, Libya's capital.

At least 250 people have been killed in the clashes, according to the U.N. Office of the High Commissioner for Human Rights, following weeks of demonstrations in neighboring Egypt that ousted its long-serving president.

Markets, fearing an unpredictable power vacuum, braced for the worst. Benchmark crude for March delivery was up a massive $7.70 at $93.90 a barrel at late morning European time in electronic trading on the New York Mercantile Exchange.

"Unlike Egypt, Libya is a significant producer of crude, and we may be seeing the largest disruptions since the start of the second Gulf War," energy consultant The Schork Report said.

If Libya's "production facilities are shut down, damaged or destroyed, there is a very real chance that they will not come back for some time," The Schork Report said.

But while investors are concerned about Libya the world's 18th largest oil producer providing almost 2 percent of global daily output the greater fear stalking markets is that the revolts will spread to OPEC's heavyweights, particularly Iran, the group's second-largest producer.

Victor Shum, an energy analyst at Purvin and Gertz in Singapore, noted that the global market could cope with significant disruptions in Libya.

"The worry is about what's next. What if protests persist in Iran and things get out of hand?" he said.

In Iran, government opposition groups this week held their largest protests in more than a year, resulting in two deaths, though the demonstrations have failed to gain the momentum seen in North Africa.

Looking ahead, there are also knock-on effects from high oil prices. A jump in energy costs could hurt consumer spending and stymie a fragile recovery in developed countries.

The crisis in the Middle East and North Africa which has brought down governments in Tunisia and Egypt and sparked protests in Yemen, Bahrain, Iran, Morocco and Jordan has added about $10 to the price of crude, according to Capital Economics.

"An additional $10 on the price of oil is not insignificant, particularly for weaker economies in Europe facing a major fiscal squeeze," Capital Economics said in a report. "Given the pace at which events are unfolding, it would be daft to rule out a spike to $140 or beyond in the coming weeks, if the unrest disrupts output from the larger oil producers."

Trading volumes were expected to increase further Tuesday as many U.S. traders come back from a long three-day holiday weekend.

The spread between the Nymex and Brent contracts has narrowed slightly but still remains far above usual levels of a few dollars per barrel. Brent is considered to be more sensitive to possible disruptions of Middle East oil supplies, while large U.S. stockpiles of crude are one of the reasons for the lower Nymex quotes.