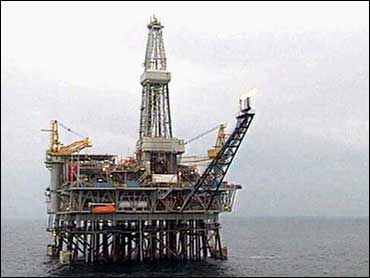 Energy companies placed $487.3 million in winning bids for the right to drill in the western Gulf of Mexico, knowing they may get a chance later to explore in other areas that have been off limits for decades.

The lease sale Wednesday was the first since President Bush last month lifted an executive ban on oil drilling off the Atlantic and Pacific coasts. Since then, politicians in both parties have signaled they are willing to expand offshore exploration, and the issue has become a hot topic in the presidential race.

Interior Secretary Dirk Kempthorne said the results were a step toward more domestic oil production. He acknowledged, however, that some of the purchased leases may not end up producing oil.

"Much more needs to be done to create the access necessary for the oil industry to do what it does best and develop this country's resources to secure our energy security," Kempthorne said at a news conference after the sale, which was held in a downtown New Orleans hotel.

A total of 53 companies offered $607 million for leases covering 1.8 million acres in federal waters off Texas. About 90 percent of the tracts the government auctioned off received no bids. The highest bid - $61 million - came from StatoilHydro USA, followed closely by Chevron USA Inc., which offered $52 million for a tract.

Republican presidential candidate John McCain made a campaign stop Tuesday on a Gulf of Mexico oil platform owned by Chevron, which is already a big player in the Gulf.

"This is where we have found success and we are the clear leader," said Chevron spokesman Mickey Driver. "We came here to win and we are leaving winners."

Once again, companies were most interested in deeper water. About 80 percent of the bids were for parcels in water 1,000 feet deep or more.

Offshore wells now provide 27 percent of the nation's domestic oil. Areas now off limits to drilling may contain much more than the 18 billion barrels of oil and 73 trillion cubic feet of natural gas now estimated to be there, Kempthorne said. Those estimates are based on exploration done over 25 years ago with now outdated technology.

Those present at the lease sale in New Orleans said there was excitement about other areas opening up, but that likely did not influence how companies bid Wednesday.

"Companies are recognizing a movement afoot, but I'm not sure this sale says much about that," said Tom Fry, president of the National Ocean Industries Association, which follows offshore drilling.