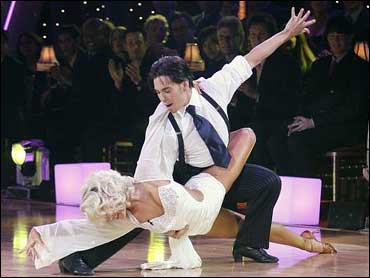 The final three couples competing in ABC's "Dancing With The Stars" began their battle for the championship Monday night, with Olympic skater Apolo Anton Ohno and former 'NSync member Joey Fatone acing their freestyle routines and Laila Ali getting the best marks in the ballroom round.

By the end of the evening, Ohno was in the lead with a judges' combined score of 58. The judges' scores and viewer votes received on Monday night will be combined with the judges' scores of a final round Tuesday night to determine the winner.

The winners don't get much more than bragging rights in this reality show, although they do get to take home the tacky disco ball trophy that the show's host, Tom Bergeron, often gleefully maligns.

Ali and her professional partner, Maksim Chmerkovskiy, began the evening dancing the paso doble. Judge Bruno Tonioli said the performance "was like a tidal wave of passion and drama, your best performance to date." The couple earned a combined score of 29.

They didn't fare so well in the freestyle round, in a number danced to Michael Jackson's "Shake Your Body (Down to the Ground)" Although the judges seemed amused that Ali ripped Chmerkovskiy's t-shirt off at the end of the routine, all three said they had hoped to see Ali dancing more sophisticated choreography.

"Your strength is elegance and sophistication, and I would have gone that route," said judge Len Goodman. Their final score was a 26, giving them a combined 55.

Ohno danced a rumba with his partner, Julianne Hough, for the ballroom round, but the judges felt it was missing the fluidity the dance requires. "It lacked any romance," said Goodman. "The rumba is a flowing romantic dance, that for me was too fast, was too hectic." Their score: 28.

Story: Super Bowl Vs. "Dancing With The Stars"

But, Ohno and his partner came back with a buoyant hip-hop number in the freestyle round, danced to Young MC's "Bust A Move." And bust a move they did with a routine that included blindfolds, breakdancing and numerous lifts. They earned a perfect 30 bringing their total score to a leading 58.

Photos: "Dancing With The Stars" Contestants

Like Ohno, Fatone's ballroom dance, a cha-cha-cha with partner Kym Johnson, wasn't traditional enough to please the judges. "It was entertaining," said Tonioli, "but it was odd, not quite there." Their score: 26.

The judges loved their disco flavored freestyle danced to Donna Summer's "Last Dance" and they also received a perfect 30, putting them in second place behind Ohno with a total of 56 points.
By Judy Faber