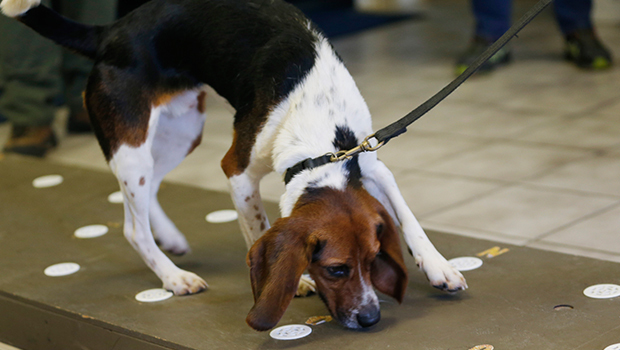 Zoos around the country will soon find out whether a beagle named Elvis can let them know when their polar bears are pregnant.

The 2-year-old has been specially trained for a year by a Kansas handler who has taught dogs to sniff out everything from explosives to bed bugs. A Cincinnati Zoo animal conservation scientist had the idea after reading about studies on using dogs to detect cancer.

Confirming pregnancies of the massive bears, a threatened species, has been difficult, and zoo officials say knowing can help make sure they and the mama bears are ready for birthing and raising cubs. They separate them from males, get them into dens with extra bedding, step up video-camera monitoring, and line up staff and volunteers for 24-hour "cub watches" later.

"It's always nice to know in advance," said Randi Meyerson of the Toledo Zoo, who coordinates polar bear species survival planning for the Association of Zoos and Aquariums. She praised the beagle project as "thinking outside the box" to provide a potentially important new tool. It's non-invasive and simple for zookeepers, who pick up fecal samples for Elvis to check out.

"We didn't even know if this was possible," said Matt Skogen, a former police officer who runs Ironheart High Performance Working Dogs in Shawnee, Kan. He was intrigued when Erin Curry, a post-doctoral fellow at the Cincinnati Zoo's Center for Conservation & Research of Endangered Wildlife, reached out for someone willing to test the idea after the center identified proteins present only in pregnant bears' samples.

Skogen started with samples of bears that had already delivered babies, and from some known not to be pregnant because they hadn't mated. He also tried training a border collie for the bear pregnancy test but soon determined that Elvis, a former Ozarks rabbit hunter, was more adept.

"He was very methodical," Skogen said. "You could tell he was really running it through the think tank."

Rewarded with food and getting to play with his favorite squeaky duck toy, Elvis trained for months and was alerting to samples of previously pregnant bears with near-perfect accuracy before Curry drove out a cooler full of current samples last week.

She watched as Elvis reacted to a control sample of a bear that had already delivered.

Elvis has been checking out samples of 22 female bears from 14 zoos, while Skogen logs his reactions. When Elvis is done, which could be in a matter of days, Curry will inform the other zoos whether Elvis predicts they'll be hearing the pitter-patter of little paws later this year.

Meyerson, whose Toledo Zoo produced two of the only three cubs that were born in U.S. zoos last year, recommends that zoos continue monitoring and have female bears go into dens if they have mated, even if Elvis' new sniff test indicates they aren't pregnant.

Polar bears have complicated reproductive cycles, and zoos have found that false pregnancies are common. Better results from captive breeding of polar bears can help zoo scientists learn more about their reproduction and also help public awareness. With the long-term survival of polar bears believed to be under threat by climate change impacts on icy habitats, species advocates such as Polar Bears International say zoo bears can play important roles.

"They serve as ambassadors for their species, and there are studies that can be done in zoos that would be impossible in the wild," spokeswoman Barbara Nielsen said.