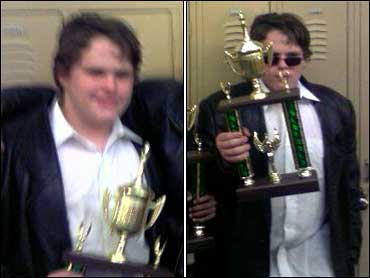 The brother of a high school student who shot and wounded four people before killing himself was led out of his home in handcuffs by police officers on Thursday, as family members looked on and called his name.

Officers placed Stephen Coon, 19, in the back of an unmarked car, then several officers went into the house. It was unclear why Coon was being taken into custody.

"Please have respect, I just lost my brother," Coon said as he was being escorted from the house.

Asa Coon, wearing a Marilyn Manson shirt, black jeans and black nail polish, opened fire with two revolvers on Wednesday, wounding two students and two teachers at SuccessTech Academy in downtown Cleveland. Coon, 14, had a history of mental problems and was known for cursing at teachers and bickering with students.

A fight with another student caught on a cell phone camera on Monday may have sent Coon over the edge, reports CBS News correspondent Bianca Solorzano.

He was suspended for it and came back shooting two days later.

Students at the school had expressed their concerns about Coon. Rasheem Smith told CBS Early Show anchor Hannah Storm that the shooting may have been prevented, and that it was known Coon had a gun. "He was talking about doing it last week," he said.

"We talked to the principal. She would try to get us all in the office, but it would always be too busy for it to happen," Smith said.

Eugene Sanders, CEO of the Cleveland Metropolitan School District, told Storm, "There is a record of the student in terms of certain challenges that he had and a record of certain support and help that he has received."