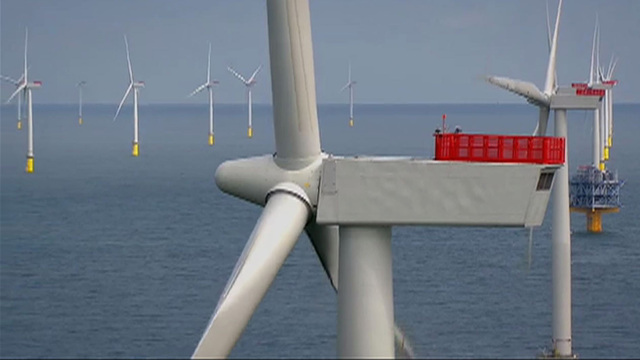 Wind turbines generate renewable electricity, but new research shows they could have another major benefit: weakening hurricanes before they make landfall.

The findings, published online in Nature Climate Change, show that offshore wind turbines could reduce hurricanes' wind speeds, wave heights and flood-causing storm surge -- acting as a buffer between coastal cities and the possible damaging effects of a hurricane.

"The little turbines can fight back the beast," said co-author Cristina Archer, an associate professor at the University of Delaware's College of Earth, Ocean, and Environment.

Archer and Mark Jacobson, a professor of civil and environmental engineering at Stanford University, had previously calculated the global potential for wind power. Taking into account that turbines are siphoning off some energy from the atmosphere -- as well as generating energy -- they found that there is more than enough wind to support energy needs worldwide, while having little to no effect on the climate.

In this new study, the researchers, which included Willett Kempton -- also from the University of Delaware -- simulated three hurricanes: Sandy and Isaac, which struck New York and New Orleans, respectively in 2012; and Katrina, which devastated New Orleans in 2005.

"We found that when wind turbines are present, they slow down the outer rotation winds of a hurricane," Jacobson said. "This feeds back to decrease wave height, which reduces movement of air toward the center of the hurricane, increasing the central pressure, which in turn slows the winds of the entire hurricane and dissipates it faster."

Although the wind farms would not completely dissipate a hurricane, it would serve two important purposes: prevent significant damage to coastal cities during hurricanes, as well as provide clean energy in both normal and hurricane-like weather conditions.

Both Jacobson and Kempton studied the costs and benefits of using offshore wind farms as a means of storm protection. In initial costs, it would be less expensive to build a seawall, but seawalls do not offer any added benefits that wind farms offer, such as reduced wind speeds and hurricane damage, as well as renewable energy. Taking into account savings from avoiding costs related to health issues, climate change and human damage, and assuming a mature offshore turbine industry, the net costs would be less than the net costs of producing electricity with fossil fuels.

"This is a totally different way to think about the interaction of the atmosphere and wind turbines," Archer said. "We could actually take advantage of these interactions to protect coastal communities."

The paper, "Taming Hurricanes with Arrays of Offshore Wind Turbines," will be published in print in March.

A warning about computers in the classroom
Thanks for reading CBS NEWS.
Create your free account or log in
for more features.
View CBS News In
CBS News App Open
Chrome Safari Continue
Be the first to know
Get browser notifications for breaking news, live events, and exclusive reporting.