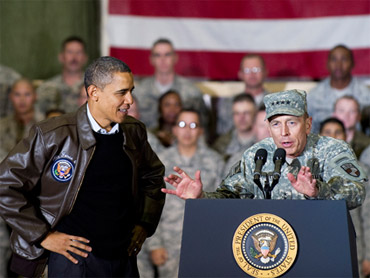 President Barack Obama's Afghanistan war review is expected to cement his stand that the United States can begin withdrawing its troops in the middle of next year and complete a handover of security to Afghan forces by the end of 2014, senior U.S. officials say.

The yearlong analysis, to be announced by the president on Thursday, is expected to report progress but warn that daunting challenges remain, including Pakistan's failure to move more aggressively against terror groups on its soil. The review intensified over the last two months, and comes a year after Obama deployed an additional 30,000 troops to Afghanistan.

White House spokesman Robert Gibbs said Tuesday the report leaves no doubt that the war is going better now than it was before Obama increased the U.S. presence in Afghanistan.

"I think you'll see in the review when a summary is made public that because of the increased troop level, you had an opportunity to push back on the Taliban in important areas of the country, something that wasn't happening until more forces were added," Gibbs said.

He said the report contains few surprises. In addition to concerns over terrorist havens in Pakistan, he said the review outlines continuing challenges in strengthening the capacity of the Afghan government.

The report also will show progress made in halting the momentum of the Taliban, degrading senior Al Qaida leaders, and increasing cooperation with the Pakistani government, Gibbs said.

While the report confirms that the United States is on course to begin drawing down forces in July, Gibbs said decisions on the size and scope of that drawdown has not yet been determined.

The review also is expected to describe the emergence of two separate fights - the first a textbook battle to counter insurgents in the south of Afghanistan, the second a more targeted effort to root out terrorists in the east.

Obama, who received a summary of the report Monday, met with his war council at the White House on Tuesday for almost two hours to review and make any final changes to the report. He will make a public statement on the findings and an unclassified summary will be released Thursday. The timing comes as the administration copes with the death of Richard Holbrooke, Obama's special envoy to Afghanistan and Pakistan, a central player in the shaping of the strategy.

The president has signaled for weeks that his decision last year to pour more than 30,000 troops into the country is slowly working. The White House has sought hard to temper expectations of the report, promising no policy overhauls and no major address to the nation by Obama.

Several officials spoke on condition of anonymity because the review has not been made public.

Adm. Mike Mullen, chairman of the Joint Chiefs of Staff, acknowledged Tuesday that the militant havens in Pakistan continue to be a crucial issue.

Returning home from Afghanistan late last week, Defense Secretary Robert Gates said his visits to troops along the mountainous Pakistan border and in the valleys to the south, made it clear that U.S.-led NATO forces are fighting two separate wars.

"The strategy in one part of the country will be different than that strategy in another part," he told reporters on his plane heading home.

In the south, troops are pushing the Taliban out of populated areas, struggling to win the trust of suspicious villagers and trying to build up Afghan forces.

In the east, there is a broader effort to stop the Taliban and foreign fighters pouring across the border from Pakistan, including members of the al Qaeda linked Haqqani network.

Battling these militants, said Gates, requires targeted attacks, similar to those used in counterterror operations, as well as a traditional counterinsurgency campaign that melds firepower with political and economic development.

"In the east, what we're engaged in is a disruption activity and a blocking activity to stop the Taliban who are coming across the border from making it to Jalalabad and to Kabul," said Gates.

He balked at calling NATO's eastern campaign a pure counterterrorism fight, saying that usually involves targeting specific insurgents or small terror cells. Instead, Gates said, the fight in along the Pakistan border is a broader effort to stop the foreign fighters from entering Afghanistan.

But the shift toward a counterterror strategy is reflected by the soaring number of bombs being dropped, troops and insurgents being killed and aggressive operations under way along Afghanistan's rugged eastern border with Pakistan.

At Forward Operating Base Joyce near the Pakistan border recently, Lt. Col. J.B. Vowell described a 200 percent increase in attacks in June 2010 compared with a year ago.

As the fighting surges, he said, the local population is content to keep one foot in the Taliban camp and the other in the NATO and Afghan government's camp, and wait to see who wins.

The battle in the East is heavily dependent on how much Pakistan is willing to do to root out insurgents, particularly the al Qaeda linked Haqqani network, which is flourishing in havens along the mountainous border.

Asked about frustrations with Pakistan, Gates and military commanders in Afghanistan have tempered their public comments, preferring to focus on the slow steps toward military collaboration among Afghan, Pakistani and U.S. troops.

Maj. Gen. John Campbell, who met with Gates at FOB Joyce, described the often unchecked movement of Haqqani insurgents back and forth across the border. Without more help from Pakistan, Campbell told reporters, progress in eastern Afghanistan is going to take longer.