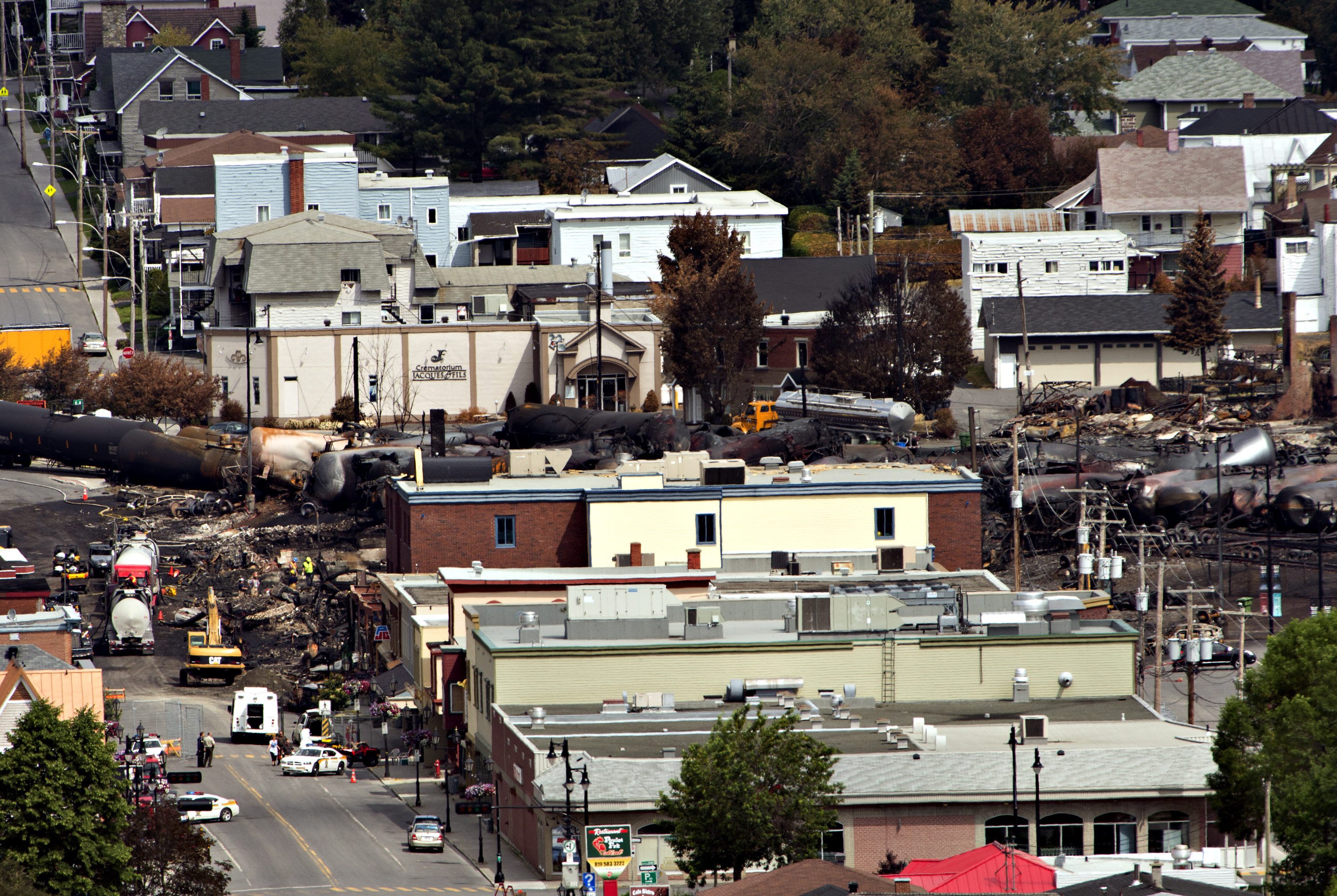 Along with 20 bodies found, that would put the death toll from Saturday's derailment and explosions in this lakeside town at 50.

Hours before that somber meeting, the head of the U.S. railway company whose train crashed made his first visit to Lac-Megantic since the disaster, amid jeers from residents and criticism from politicians, including the Quebec premier.

The rail chief blamed the engineer for failing to set the brakes properly before the Montreal, Maine & Atlantic Railway train hurtled down a seven-mile (11-kilometer) incline, derailed and ignited. All but one of the 73 cars was carrying oil, and at least five exploded.

Edward Burkhardt, president and CEO of parent company Rail World Inc., said the engineer had been suspended without pay and was under "police control."

Parts of the devastated town had remained too hot and dangerous to enter and find bodies days after the disaster. Some 60 people had been presumed missing earlier.

"Now we are standing here with a number of 50 persons that we are considering most probably dead in this tragedy," said Quebec police inspector Michel Forget, who came to an afternoon news briefing from a meeting with families of the dead and missing.

"We informed them of the potential loss of their loved ones," Forget said. "You have to understand that it's a very emotional moment, and our thoughts are with these families."

Another police official, Sgt. Benoit Richard, said investigators had spoken with Burkhardt during his visit. He did not elaborate.

Until Wednesday, the railway company had defended its employees' actions, but that changed abruptly as Burkhardt singled out the engineer as culpable.

"We think he applied some hand brakes, but the question is, did he apply enough of them?" Burkhardt said. "He said he applied 11 hand brakes. We think that's not true. Initially we believed him, but now we don't."

Burkhardt did not name the engineer, though the company had previously identified the employee as Tom Harding of Quebec. Harding has not spoken publicly since the crash.

"He's not in jail, but police have talked about prosecuting him," Burkhardt said. "I understand exactly why the police are considering criminal charges ... If that's the case, let the chips fall where they may."

Quebec police have said they were pursuing a wide-ranging criminal investigation, extending to the possibilities of criminal negligence and some sort of tampering with the train before the crash. The heart of the town's central business district is being treated as a crime scene and remained cordoned off by police tape Wednesday.

"We have realized there are serious gaps from the railway company from not having been there and not communicating with the public," Marois said. She depicted Burkhardt's attitude as "deplorable" and "unacceptable."

Burkhardt, who arrived in town with a police escort, said he had delayed his visit in order to deal with the crisis from his office in Chicago, saying he was better able to communicate from there with insurers and officials in different places.

"I understand the extreme anger," he said. "We owe an abject apology to the people in this town."

In an exchange with reporters, Burkhardt defended the practice of leaving trains unmanned, as was the case when the train rolled away. Canadian transportation department officials have said there are no regulations against it.

Among the residents looking on as Burkhardt spoke was Raymond Lafontaine, who is believed to have lost a son, two daughters-in-law and an employee in the disaster.

"That man, I feel pity for him," Lafontaine said. "Maybe some who know him properly may think he's the greatest guy in the world, but with his actions, the wait that took place, it doesn't look good."

The disaster forced about 2,000 of the town's 6,000 residents from their homes, but most have been allowed to return.