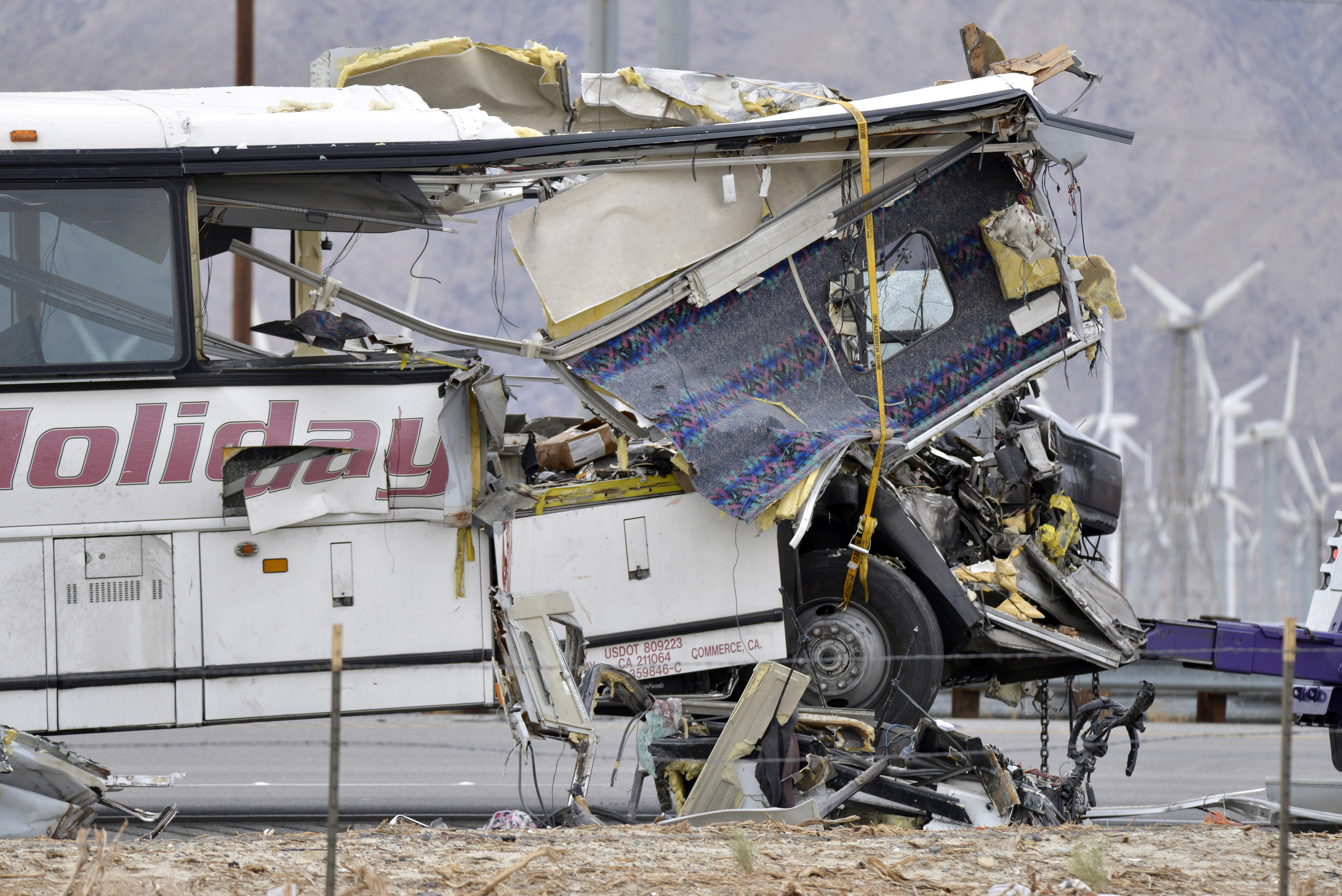 PALM SPRINGS, Calif. -- Ana Car didn’t remember the sudden impact, only that she woke up among dead and injured passengers in a dark bus filled with screams of terror and agony.

The retired factory worker had spent an evening gambling at a desert casino and was sound asleep when the bus heading to Los Angeles smashed into the rear of a slow-moving tractor-trailer. The crash killed the bus driver and 12 passengers and injured 31 other people.

“I can’t believe how many died,” she said, sobbing Monday as she recovered from bumps, bruises and a sore back. “It was so horrible. These images are going to stay in my head for life.”

The National Transportation Safety Board was investigating the collision, which is one of the deadliest wrecks in California history.

The truck was creeping along at 5 mph because of utility work that had gone on throughout the night along Interstate 10 near Palm Springs. That’s when the bus, moving as fast as 65 mph, slammed into it, authorities said.

“There’s no indication whatsoever that the driver applied the brakes,” said California Highway Patrol Border Division Chief Jim Abele, citing the power of the impact and the fact that no skid marks were found.

The truck driver involved in the crash described his ordeal to a cab driver on his way to the hospital on Sunday.

“I’m blessed to be alive and I pray for the families that didn’t make it,” the driver of the big rig named “Bruce” told David Hirschfield, who gave a video of their conversation to media outlets.

Hirschfield picked up the trucker after he was released on the same day as the accident from Eisenhower Medical Center in Rancho Mirage,CBS Los Angeles reported. Bruce did not provide his last name at the time.

“The impact just, you know, hit me from behind and I just blacked out for a minute and when I gained my consciousness, I undid my seatbelt and looked around. Thought I got ran over by something. That’s when I got out of my truck,” Bruce said.

In the video Bruce has bandages on one hand. He also suffered cuts to his right leg. Despite his wounds, he got out of his truck and helped pull out bus passengers.

“You got to think about others. I’m going to be alright. I want to get them safe. I don’t know if the bus is going to blow up,” Bruce said.

Hirschfield said he recorded the conversation before he dropped Bruce off at a Palm Springs Hotel.

“He’s quite a wonderful gentlemen I was privileged to pick him up,” Hirschfield said. “I didn’t charge him. I said you’ve been through enough today.”

Initial reports said four people were dead, but many bodies were later found in the front portion of the bus that ended up inside the trailer.

“They just kept pulling bodies stuck in between the seats,” he said. “It’s just due to this bus going so fast into the back of the truck. Why he did that, that’s what we’re trying to find out.”

Car, 61, was sitting toward the back of the bus when it rammed the truck around 5:15 a.m. Sunday. She awoke to find herself standing amid bodies flung everywhere. Those who could move were pushing and shoving in the pre-dawn darkness to climb out from under each other.

She clambered to a broken window to yell for help, panicked she would be trapped if the bus caught fire. Motorists who stopped to help pulled her out the broken window.

“I couldn’t stand when they got me out,” Car said. “I sat on the side of the road, watching them pull so many people out. I saw so much blood and two dead bodies. I was so scared.”

The NTSB planned to look into the history of the bus, its owner-driver and other circumstances, such as what the driver was doing during the four to five hours the bus was at the Red Earth Casino in the desert town of Thermal before making the 135-mile trip back to LA.

Teodulo Elias Vides owned the bus company, USA Holiday, and was the only driver, according to federal and state records. The 59-year-old had a valid commercial license and a clean record in recent years. And the bus had passed annual inspections.

USA Holiday was licensed to travel between states, which subjected Vides to federal limits on driver work hours. Under the scenario officials described -- leaving Los Angeles at 8 p.m. and returning less than 12 hours later -- Vides would have been within those limits, which cap driving time to 10 hours within a 15-hour span and do not prescribe specific rest requirements.

A call to the company was not returned.

Vides was named in lawsuits stemming from three freeway collisions, though he was not the driver in any of the cases, according to court records.

In 2007, a USA Holiday bus collided with a Honda Civic in Riverside, killing the car’s driver and two passengers. Family members filed a personal injury and negligence lawsuit against the driver of the bus and Vides, whose attorneys argued that the Honda driver lost control. That case was dismissed.

The 1996 bus did not have seat belts and was old enough that it probably did not have a data recorder that would reveal how fast it was traveling and whether the driver braked before impact.

At the street corner where the bus was supposed to arrive, candles and flowers surrounded a tree.

“It’s painful,” said Cartier Houpe, who occasionally rides the bus to the casinos but skipped the latest trip. “I’m still trying to find out the names of people. Once we find out, it’ll be more painful.”

The Riverside County sheriff-coroner’s office identified 12 of the 13 people killed. The dead included 10 women between 52 and 72, plus the driver and a 62-year-old man. One man remained unidentified. Most were from Los Angeles.

One of the fatalities was Zoila Aguilera, 72, a retired cook who liked to head out every other weekend to play the slots for fun, said her grandson, Bryan Ramirez.

Ramirez said he was having breakfast and watching a soccer game Sunday morning when his family heard the news of the crash. He said he immediately started calling his grandmother’s phone, hoping she would pick up.

Aguilera insisted on sitting near the front of the bus, rebuffing her son, Ramirez’s father, who tried to get her to sit toward the rear.

“She loved to sit in the front. There was no changing her mind,” Ramirez said. “She just felt safer there.”

Car said she ended up toward the back of the bus because she bought a $20 last-minute ticket after running into her friend, Rosa Ruiz, who persuaded her to take the journey to a different casino that night.

They knew each other from previous gambling jaunts, and she enjoyed Ruiz’s sense of humor.

When she got back on the bus after playing quarter slots, she chatted briefly with Ruiz and then sunk into her seat and quickly fell asleep. She was devastated to learn Ruiz, 53, was killed.