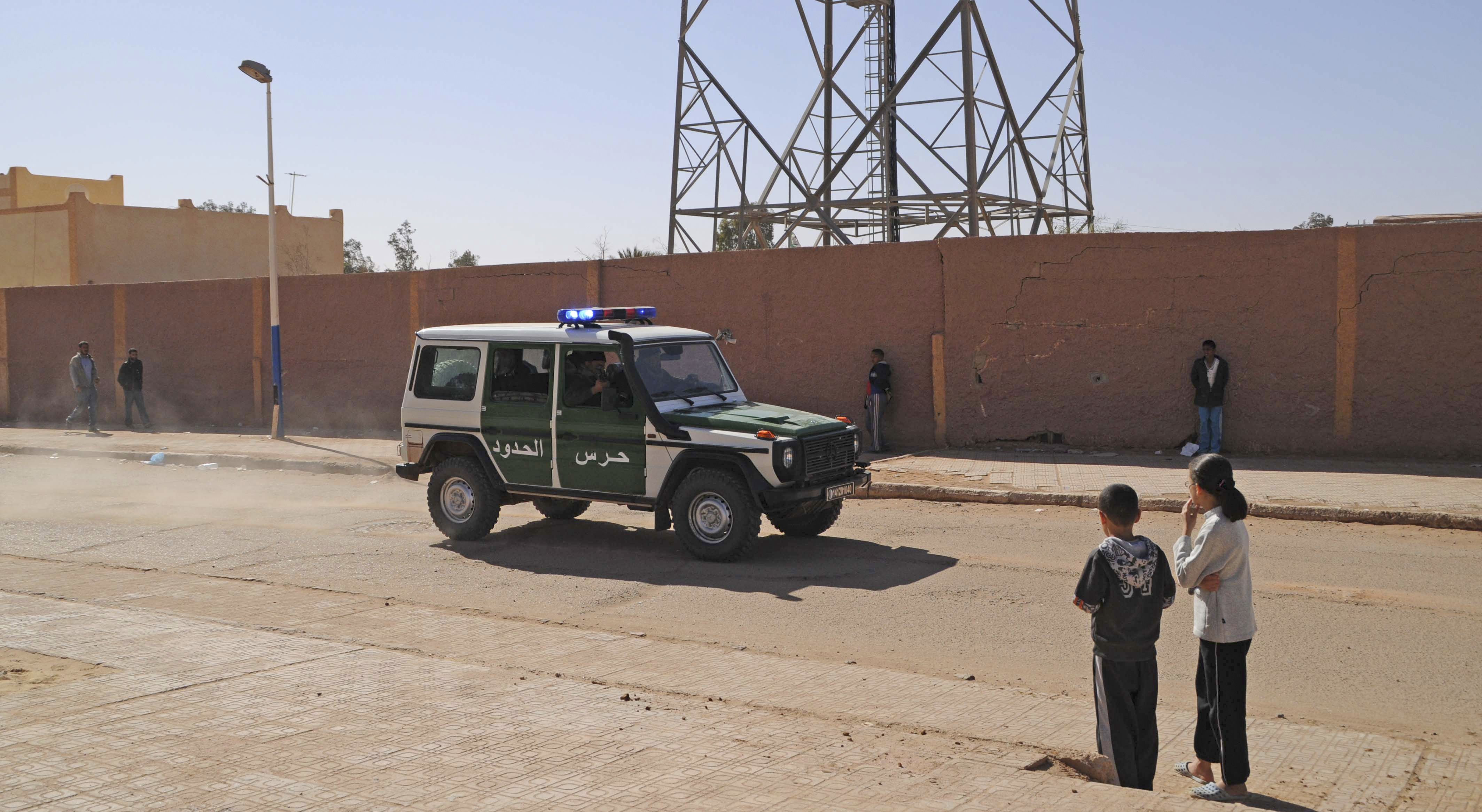 ALGIERS, Algeria Algerian bomb squads scouring a gas plant where Islamist militants took dozens of foreign workers hostage found "numerous" new bodies on Sunday as they searched for explosive traps left behind by the attackers, a security official said, a day after a bloody raid ended the four-day siege of the remote desert refinery.

The official, who spoke on condition of anonymity because of the sensitivity of the situation, said the bodies were badly disfigured and difficult to identify.

"The bodies could be either Algerian or foreign hostages," he said.

Algerian special forces stormed the natural gas complex in the Sahara desert on Saturday to end the standoff, and the government said all 32 militants were killed. Earlier Sunday, Algeria's chief government spokesman said he feared the toll of hostages — which stood at 23 on Saturday — would rise as the special forces teams finished their search.

One American, a Texan — Frederick Buttaccio from the Houston suburb of Katy — was among the dead. U.S. officials told The Associated Press Buttaccio's remains were recovered Friday.

He said the militants came from six countries and were armed to cause maximum destruction. Sonatrach, the Algerian state oil company running the Ain Amenas site along with BP and Norway's Statoil, said the entire refinery had been mined.

"They had decided to succeed in the operation as planned, to blow up the gas complex and kill all the hostages," said Communications Minister Mohamed Said, speaking on a state radio interview.

The American government has warned that there are credible threats of more kidnapping attempts on Westerners in Algeria.

With few details emerging from the remote site of the gas plant in eastern Algeria, it was unclear whether anyone was rescued in the final operation, but the number of hostages killed Saturday — seven — was how many the militants had said that morning they still had.

British Prime Minister David Cameron said Sunday that three Britons were killed and another three are believed dead, along with a foreigner who was living in Britain. He said that 22 Britons who survived the ordeal are now back in Britain.

"Now, of course, people will ask questions about the Algerian response to these events, but I would just say that the responsibility for these deaths lies squarely with the terrorists who launched a vicious and cowardly attack," Cameron said.

The siege at Ain Amenas transfixed the world after radical Islamists linked to al Qaeda stormed the complex on Wednesday, which contained hundreds of plant workers from all over the world, then held them hostage surrounded by the Algerian military and its attack helicopters for four tense days that were punctuated with gun battles and dramatic tales of escape.

Algeria's response to the crisis was typical of its history in confronting terrorists, favoring military action over negotiation, which caused an international outcry from countries worried about their citizens. Algerian military forces twice assaulted the two areas where the hostages were being held with minimal apparent mediation — first on Thursday, then on Saturday.

"To avoid a bloody turn of events in response to the extreme danger of the situation, the army's special forces launched an intervention with efficiency and professionalism to neutralize the terrorist groups that were first trying to flee with the hostages and then blow up the gas facilities," Algeria's Interior Ministry said in a statement about the standoff.

An audio recording of Algerian security forces speaking with the head of the kidnappers, Abdel Rahman al-Nigiri, indicates that the hostage-takers were trying to organize a prisoner swap with authorities.

"You see our demands are so easy, so easy if you want to negotiate with us," al-Nigiri said in the recording broadcast by Algerian television. "We want the prisoners you have, the comrades who were arrested and imprisoned 15 years ago. We want 100 of them."

People familiar with al-Nigiri confirmed that the voice in the recording was his.

In another phone message, al-Nigiri described how half the militants had been killed by the Algerian army on Thursday and that he was ready to blow up the remaining hostages if security forces attacked again.

SITE Intelligence Group, which monitors videos from radicals, posted one showing al-Nigiri with what appears to be an explosive belt strapped around his waist, dating from Jan. 17, after the start of the attack.

Algeria's prisons are filled with militants from the long battle with Islamist extremists that began in the 1990s.

David Plouffe, a senior adviser to President Barack Obama, said Sunday that al Qaeda and al Qaeda-affiliated groups remain a threat in northern Africa and other parts of the world, and that the U.S. is determined to help other countries destroy these networks. Speaking on "Fox News Sunday," Plouffe said the tragedy in Algeria shows once again "that all across the globe countries are threatened by terrorists who will use civilians to try and advance their twisted and sick agenda."

The U.S. State Department issued a travel warning Saturday night for Americans in or traveling to Algeria, citing credible threats of the kidnapping of Western nationals. The department also authorized the departure from Algeria of staff members' families if they choose to leave.

Immediately after the assault, French President Francois Hollande gave his backing to Algeria's tough tactics, saying they were "the most adapted response to the crisis."

"There could be no negotiations" with terrorists, the French media quoted him as saying in the central French city of Tulle.

Hollande said the hostages were "shamefully murdered" by their captors, and he linked the event to France's military operation against al Qaeda-backed rebels in neighboring Mali. "If there was any need to justify our action against terrorism, we would have here, again, an additional argument," he said.

On Sunday, French Foreign Minister Laurent Fabius said he was "appalled" at the idea that blame would be laid on Algerian authorities instead of the jihadist captors.

"The terrorists ... they're the ones to blame," Fabius said on France's iTele TV channel. He said Algerian officials were in touch with the French during the crisis. "But they didn't have to tell us: `Here is what we will do."'

In the final assault, the remaining band of militants killed seven hostages before 11 of them were in turn cut down by the special forces, Algeria's state news agency said. The military launched its Saturday assault to prevent a fire started by the extremists from engulfing the complex and blowing it up, the report added.

A total of 685 Algerian and 107 foreigner workers were freed over the course of the four-day standoff, the Interior Ministry statement said, adding that the group of militants that attacked the remote Saharan natural gas complex consisted of 32 men of various nationalities, including three Algerians and explosives experts.

Algeria has fought its own Islamist rebellion since the 1990s, elements of which later declared allegiance to al Qaeda and then set up new groups in the poorly patrolled wastes of the Sahara along the borders of Niger, Mali, Algeria and Libya, where they flourished.

The standoff has put the spotlight on al Qaeda-linked groups that roam these remote areas, threatening vital infrastructure and energy interests. The militants initially said their operation was intended to stop a French attack on Islamist militants in neighboring Mali — though they later said it was two months in the planning, long before the French intervention.

The militants, who came from a Mali-based al Qaeda splinter group run by an Algerian, attacked the plant Wednesday morning. Armed with heavy machine guns and rocket launchers in four-wheel drive vehicles, they fell on a pair of buses taking foreign workers to the airport. The buses' military escort drove off the attackers in a blaze of gunfire that sent bullets zinging over the heads of crouching workers. A Briton and an Algerian — probably a security guard — were killed.

The militants then turned to the vast gas complex, divided between the workers' living quarters and the refinery itself, and seized hostages, the Algerian government said. The gas flowing to the site was cut off.

The accounts of hostages who escaped the standoff showed they faced dangers from both the kidnappers and the military. The militants focused on the foreign workers from the outset, largely leaving alone the hundreds of Algerian workers who were briefly held hostage before being released or escaping.