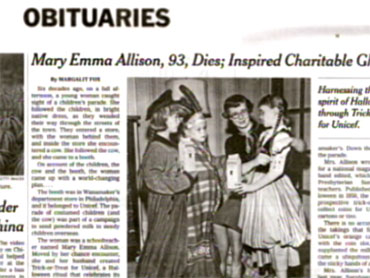 Nothing is certain but death and taxes, but let's not talk about taxes. The other inevitability is the special province of a kind of journalist CBS' Jeff Greenfield now reports on … the only kind or journalist who knows with certainty that sooner or later his story will run.

When the famous, powerful or celebrated die, little in their lives can match the leaving of them. The world quiets down and millions grieve.

Those left behind build imposing memorials to remember them, or to hold their remains.

Few, of us, of course, will be honored with days of mourning, and resting places the likes of Grant's Tomb. But for those who have left a mark on the times they lived in, their passing will be marked, if at all, on the obituary page of a newspaper.

"Obits only have one line that deals with death," obit writer Jade Walker said. "The rest of the story is about the amazing lives that people lead."

"The responsibility's awesome," Jim Nicholson, another obit writer, said. "You have the last earthly word on an individual's life. You're, in a sense, writing their legacy. And it's up to you how you want to write it."

Once upon a time, the obituary was as traditional as typewriters and switchboard operators, and newsrooms heavy with cigarette smoke.

They were formal, polite - and the standard for inclusion was rigid.

"In the old days, people were often 'obituarized,' if that's the word, just for being upstanding members of society," said Bill McDonald, who has edited The New York Times' obituary section for four years.

"If you belonged to the right clubs and went to the right schools, matrons and such, philanthropists, they still may be obits in The Times, but it is not an automatic call now, where it might have been 20, 40 years ago.

In the early 1980s, a Philadelphia Daily News writer named Jim Nicholson moved to the obituary beat, and began to breathe new life into this very old form.

"We were the people paper; still is the people's paper," Nicholson said. "And it just seemed natural to do real-house people, mechanics, plumbers, teachers, cops - nothing startling."

People like a chef "who was a hard worker and an easy touch"; a bartender "who could make a setting click whether it was a tavern, girls club or home."

That was something of a revolutionary idea for a big-city newspaper. But it wasn't just who got memorialized, but how, with recollections and anecdotes that brought these people to life, the kind of stuff that happens every day on street corners.

"When two buddies run into each other and say, 'Did you hear crazy Ralph died?' 'No, really?' And for the next five minutes, they sum up all the characteristics, good and bad, of crazy Ralph, right off the top of their head," Nicholson said. "Sometimes, when you get really small picture and granular, you get the big picture. What would make him mad? What kind of cigarettes did he smoke? Did he keep his shoes neat in the closet?"

It was an approach that won Nicholson an American Society of Newspaper Award for best writing. Not obituary writing. Best writing, period.

And it's made Nicholson a hero to those who followed in his path, and who gathered earlier this year in Phladelphia - writers like Kay Powell, who spent 16 years writing obits for the Atlanta Journal Constitution.

"I feel every person has one good story in 'em, and this is my chance to be on the phone, talking to family and friends, capturing that person," Powell said.

Powell found that humor and an off-beat lead can work just as well in an obit as in any other story. "Well, I'll give you the lead on one of my stories I wrote: 'George Hopkins died again Friday.'"

Turns out, Hopkins almost drowned during World War II, and was brought back to life.

Powell also loved her idea for an auctioneer's obit, which she resisted using: "Going, going, gone."

Of course, there's a whole new universe of media that surrounds us now, and it's given the obituary a whole new dimension.

Jade Walker, who has an obituary blog called The Death Beat, says the Web offers limitless ways to remember.

"Often times when we're doing research for obits, we search places like YouTube. Or if I'm dealing with a musician, I'll link directly to her page where they have music clips," Walker said. "People of all ages have their own blogs and journals. They have their own Facebook pages. There's no reason why we can't link to those." 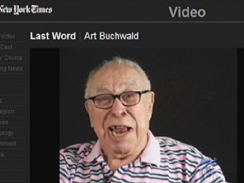 (CBS)
The New York Times has met the challenge of new media as well, by sharing video interviews in contemplation of death.

There was no laughter, no contemplation of death nine years ago when the Times faced its biggest challenge in memorializing the dead, when nearly 3,000 people died in an instant.

On the front page, headlines and photos could signify the enormity of the 9/11 event. But how to deal with a few thousand dead, most of whom were known only to friends, family and colleagues?

"We quickly realized the traditional obituary structure wouldn't work for 2,400 people. So we set up this idea of focusing each one on one trait of that person's life, whether it be something about their personality, or some author they'd loved," Wendell Jamieson said.

Jamieson edited "Portraits of Grief" - short capsules of more than 2,000 lives that ran every day for three and a half months in The Times.

Jan Hoffman wrote more than 75 of them.

And she found the stories that lay beneath the surface - for instance, of an apparently happy-go-lucky young man.

"Right before his memorial service, an oncologist came to the family and said, 'I'd like to speak at his memorial. Didn't you know? He had cancer. And he would come to our clinic and cheer everyone up, all the nurses.' And what he did was he put makeup on his face so his family wouldn't realize he was going through chemotherapy."

For Hoffman and those who chronicle death on a daily basis, the writing about the end of life has left them with very clear lessons about their own: "I recognize that it's going to happen. I'm not afraid of it. But knowing that it's coming, I have to make the most of what we have.

"Every time I look at the 'Portraits of Grief,' a question I ask myself is: What would mine say?" Hoffman said. "How would you capture your life in 200 words? What would the people who love you say about you?"

Editor's Note: Wendell Jamieson's quote was improperly attributed in an earlier version of this story.

Picking up pickleball
Thanks for reading CBS NEWS.
Create your free account or log in
for more features.
View CBS News In
CBS News App Open
Chrome Safari Continue
Be the first to know
Get browser notifications for breaking news, live events, and exclusive reporting.