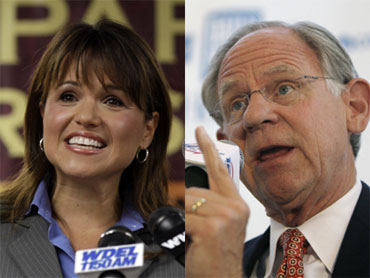 There are primaries in seven states and Washington, D.C. today. But the one that everyone is watching is in Delaware because who wins there could very well determine whether Republicans have a shot at taking control of the Senate.

It was a $250,000 pledge from the Tea Party Express, that vaulted Republican Christine O'Donnell from dark horse to contender in the Delaware Senate primary, reports CBS News correspondent Nancy Cordes.

"There's a tidal wave coming in Delaware and we're riding it and my opponent is drowning in it," she said.

Everyone thought her opponent would be a shoo-in; Mike Castle is a popular nine-term Congressman and former Delaware governor. But the newest polls show them neck-and-neck.

"I think she's too extreme for Delaware," Castle said.

A former marketing consultant, O'Donnell has never held public office, although she has run for Senate twice before (and ran a write-in campaign after losing a primary).

In a November 1998 article for Cultural Dissident called "The Case for Chastity," O'Donnell wrote, "When a married person uses pornography, or is unfaithful, it compromises not just his (or her) purity, but also compromises the spouse's purity."

She has also faced media firestorms over her statements that she fears for her personal safety from political enemies hiding in the bushes, and a financial disclosure form which reveals she declared her earned income between March 2009 and June 2010 was a mere $5,800.

Freedom Works, a conservative group which backed a number of Tea Party candidates, has not given O'Donnell its support, saying that they see her as a weak candidate whom they don't believe can win in a general election.

"If Christine O'Donnell wins the primary election, she's going to have a very difficult time winning in what is still a very blue, very Democratic state," said Reid Wilson, editor in chief of The Hotline.

The stakes are so high in Delaware because Republicans must win this special election for Vice President Biden's former seat if they want a real chance to reclaim the Senate (They need to win 10 Senate seats to do that). What's more, because of the special election rules, the winner in the general election will be sworn in immediately, rather than in January, so his or her vote will matter in the post-election lame duck session.

So Republican leaders are putting all their muscle behind Castle.

The state GOP's website (which refers to O'Donnell as a "perennial candidate") called on her to address a complaint to the FEC that O'Donnell, her campaign and the Tea Party Express broken campaign fundraising laws, and reposted an article from the Weekly Standard about a $6.9 million gender bias suit O'Donnell brought against her former employer, a conservative non-profit.

Ads have been run detailing O'Donnell's past financial problems: Didn't pay thousands in income taxes . . . had to be sued by a university for thousands in unpaid bills.

But some polls show the race between the two candidates to be extremely close. Politco reported one poll that has O'Donnell up by three percentage points.

Appearing this morning on CBS' "The Early Show," O'Donnell said, "You know, people didn't think that we would get this far in the primary, either. And I think that that's a lazy way out to say that we can't win.

"We have a winning message that after the primary we're going to take into the general election, a message that resonates with independents and Democrats, because the people who are struggling economically, it doesn't go by party lines.

"Our message is that we need real economic growth based on the private sector. We need to create jobs by getting the government out of the way of the small business owner and the entrepreneur. We can't afford more of these big spending bills that my Republican and Democratic opponents support. Common sense men and women here in Delaware know that that's not sustainable."

O'Donnell is hoping for help with a late endorsement from Sarah Palin, who's also recording robo-calls for her.

O'Donnell also described the attacks on her record as "fortunate."

"My opponent can't stand on his record, so he's resorted to character assassination, and it's backfired," she told anchor Eric Hill. "It's really exciting that the voters are seeing right through that. They're tired of politics-as-usual, and they're rallying behind me, because they trust me to represent them in Washington, a much-needed real change in Washington."