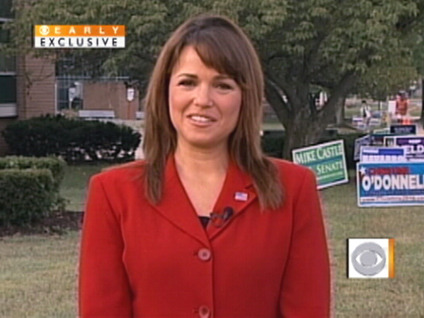 A Tea Party-backed candidate in today's Delaware Republican primary for Senate said today that ads attacking her personal financial history are an insult to voters, and said recent polling showing her running strong against the candidate backed by GOP leaders suggests voters are "fighting back."

Christine O'Donnell, a former marketing consultant who has never held elected office, sprinted to prominence in the Delaware race after receiving support from the Tea Party Express and an endorsement from former Alaska Gov. Sarah Palin.

But there's been increased scrutiny of O'Donnell's personal financial history, which her opponents say precludes her from effectively overseeing public finances, and complaints about alleged illegal campaign fundraising.

O'Donnell has returned fire, saying on CBS' The Early Show" that her opponent, nine-term Congressman Mike Castle, has received the majority of his campaign funds from an "out-of-state corporate special-interest tax."

Attack ads claim O'Donnell didn't receive her college degree for 12 years because of what she owed in outstanding bills to the school, and question unpaid campaign debts from her previous runs for office.

A complaint was also lodged with the Federal Election Commission against O'Donnell, her campaign organization and the Tea Party Express over alleged illegal fundraising activities.

There was also a financial disclosure form which reveals she declared her earned income between March 2009 and June 2010 was only $5,800. And attack ads have said O'Donnell received a tax lien from the IRS.

When asked this morning on "The Early Show" whether voters could trust her with the nation's finances when she's appears to have had considerable financial difficulties herself, O'Donnell said, "Absolutely."

"All of those accusations are addressed on my website, christine2010.com. And when the question of financial responsibility comes into question, you have to look at how I handled those financial difficulties.

"I'm an average hard-working American. I'm not a multi-millionaire like my opponent. Of course in this economy I've fallen on hard times. But I worked hard. I sacrificed. I made the decision that I needed to make things right. I came through to the other side in a very strong position. I made it through the difficult times. That's what the voters are seeing. Financial responsibility is making your obligations right.

"My opponent has cashed a government paycheck, a taxpayer-funded government paycheck for over four decades," she said. "So when he makes those accusations that that's irresponsible because someone has struggled, he's insulting the voters. And I think that's where the backlash has come from. And that's why so many former people who once supported my opponent are now on my side. Because of this obnoxious sense of entitlement that this position should be handed to the next anointed king."

Anchor Eric Hill asked O'Donnell about the funding and support her campaign has received, which includes up to $250,000 from the Tea Party Express, and other support from outside Delaware.

"How much of your funding, how much of your volunteering is coming from within the state of Delaware? There's been some criticism that too much of it is a national and not a local level," said Hill.

Without mentioning her own campaign funds, O'Donnell answered by highlighting the efforts of campaign workers. "Well, we have an army of volunteers that have given us the strength we need to get the national attention," she said.

"And my opponent, over about 70% of his donations come from out-of-state corporate special-interest tax."

She said her campaign is relying on "grassroots" support.

"We are not a party apparatus," O'Donnell said. "So when [Sarah] Palin and [Sen. Jim] DeMint and Sean Hannity and others have come in and gotten behind our grassroots effort, it was a vote of confidence for we, the people, and a vote against the politics of personal destruction. So what they were saying was, enough is enough.

To watch Christine O'Donnell's interview on "The Early Show" click on the video player below.