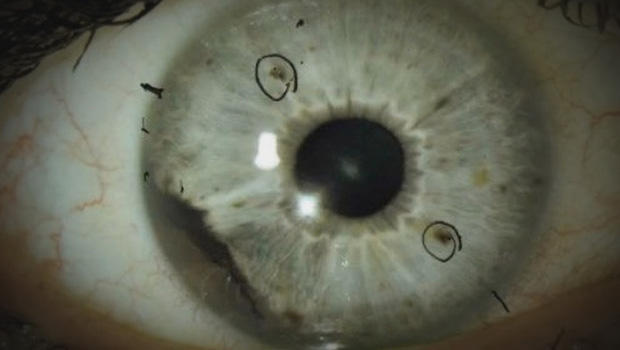 Researchers want to know what may be causing a rare eye cancer in two states. Ocular melanoma is an extremely rare form of cancer, usually found in just six of every one million people. But it has been identified in a group of 18 patients in Huntersville, North Carolina, and in a second group in Auburn, Alabama, some of whom were friends who'd attended Auburn University together.

Juleigh Green was diagnosed first: at age 27, she saw odd flashes of light.

"He said, 'There's a mass there, there's something there, I don't know what it is, but it looks like it could be, you know, a tumor,'" Green said. "It's like you had the breath knocked out of you, you know?"

A doctor told her she had a detached retina, but then, "He said, 'Well, it's detached because there's a 10-millimeter melanoma sitting on it.'"

Both women had to have an eye removed. Then their friend Ashley McCrary found black spots in her iris. It was the same rare cancer.

"What's crazy is literally standing there, I was like, 'Well, I know two people who've had this cancer," said McCrary.

"And did you understand then how strange that was?" asked CBS News correspondent Anna Werner.

Strange enough that she mentioned it to Dr. Marlana Orloff, the oncologist treating her at the Sidney Kimmel Cancer Center (SKCC) at Thomas Jefferson University in Philadelphia.

"Most people don't know anyone with this disease," said Dr. Orloff. "We said, 'OK, these girls were in this location, they were all definitively diagnosed with this very rare cancer –  what's going on?'"

Dr. Orloff and her colleagues are now studying these patients, many of whom travel to Philadelphia for treatment.  Another Auburn grad, Lori Lee, kept her eye, but the cancer metastasized to her liver. She now travels from Alabama to Philadelphia every six weeks, to be treated in a clinical trial.

"This is a rare cancer, so it's not like you can just go anywhere and have anybody know anything really about it," Lee said.

There is no known cure. Allison Allred's cancer has recurred nine times in six places in her body.

"Two days ago found out that it's come back to my brain," Allred said, "So, I'm actually gonna have radiation on my brain tomorrow."

Werner asked, "How do you sit there with a smile, given everything that you've been through?"

Werner said, "The other thing that's kind of touchy is that people think of what happened to the three of you as a disfiguring injury."

"That was very hard for me," McCrary replied. "Growing up, the one thing that I liked about myself was my eyes."

But their own struggles motivated them to help find other cancer victims. McCrary started a Facebook page. So far, she says, 36 people have responded saying they, too, attended Auburn University and have been diagnosed with ocular melanoma.

"We believe that when we're looking at what's going on in Huntersville, North Carolina, and what's going on here, there is something that potentially links us together," she said.

"Until we get more research into this, then we're not gonna get anywhere. We've got to have it so that we can start linking all of them together to try to find a cause, and then one day, hopefully, a cure," said Lee.

Auburn University officials say they are hopeful that research and awareness will advance the prevention and treatment of this cancer. The Alabama Department of Health believes "it would be premature to determine that a cancer cluster exists in the area."