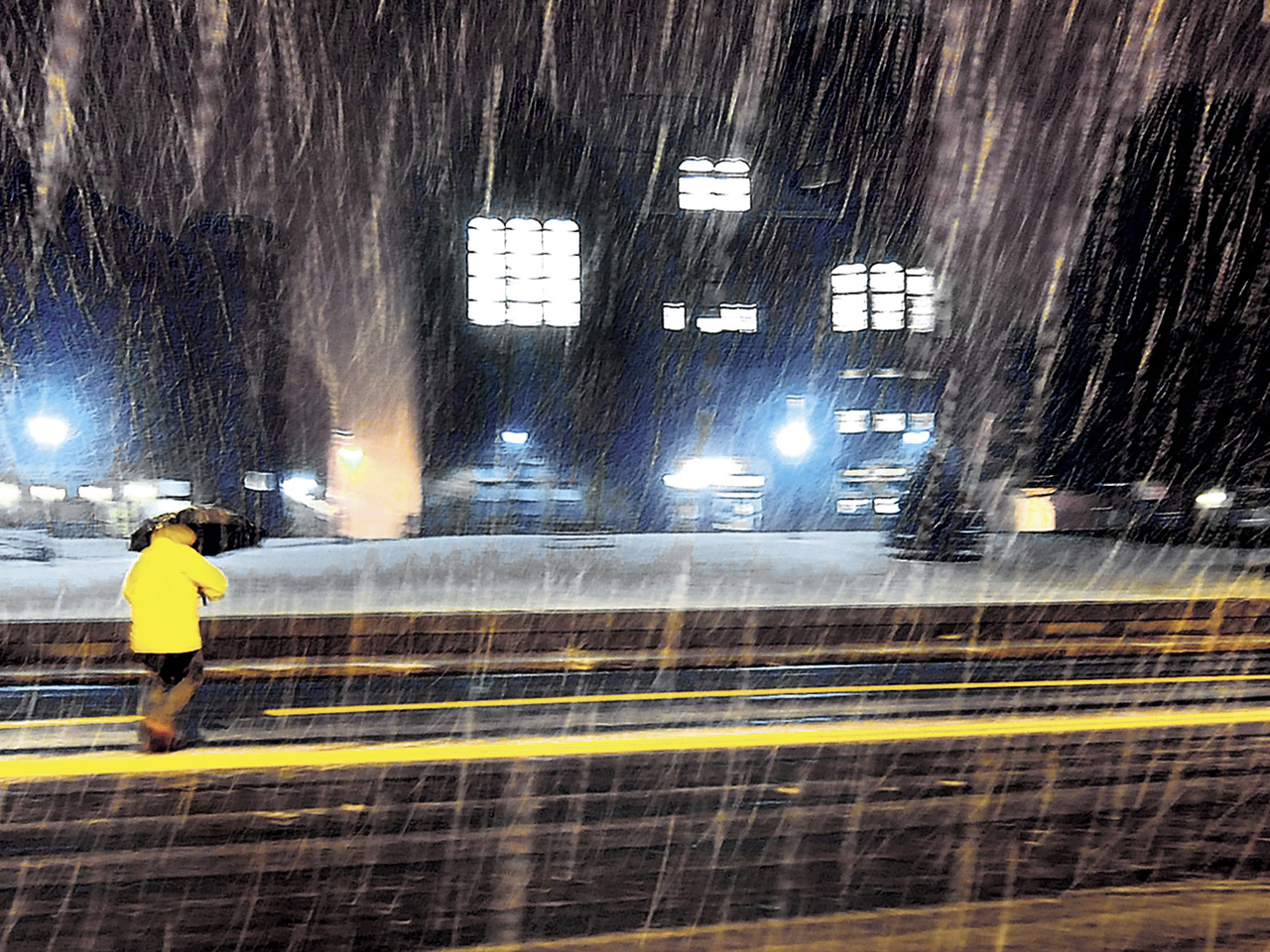 HEBRON, Conn. - Steve Hoffman had expected to sell a lot of fall fertilizer this weekend at his hardware store in Hebron but instead spent Friday moving bags of ice melting pellets.

A storm moving up the East Coast was expected to combine with a cold air mass and dump anywhere from a dusting of snow to about 10 inches Saturday in parts of the Northeast.

"We're stocked up and we've already sold a few shovels," Hoffman said. "We actually had one guy come in and buy a roof rake."

National Weather Service meteorologist Bill Simpson said the rake probably won't be needed, but October snowfall records could be broken in parts of southern New England, especially at higher elevations. The October record for southern New England is 7.5 inches in Worcester in 1979.

The most snow will likely hit the Massachusetts Berkshires, the Litchfield Hills in northwestern Connecticut, and southwestern New Hampshire, Simpson said. Connecticut Gov. Dannel P. Malloy warned residents that they could lose power.

"This is a widespread nor'easter that's going to affect a large portion of the New England area, northeast quadrant of the country," Tim Morrin with the National Weather Service told CBS Radio News.

New York City could also see trace amounts of snow, the first to fall in the city before Halloween since 1952, CBS News station WCBS-TV reports.

"Northwestern New Jersey, the lower Hudson Valley, portions of northern Connecticut, the whole state of Massachusetts except for the Cape and then all the way up through New England, those areas are expected to see accumulating snow of anywhere from 4, 6, higher elevations could be as much as 8 or 10 inches," Morrin told CBS Radio News

The storm could bring more than 6 inches of snow to parts of Maine beginning Saturday night. Parts of southern Vermont could receive more than a foot of wet snow Saturday into Sunday.

In Pennsylvania, 6 to 10 inches could fall at higher elevations, including the Laurel Highlands in the southwestern part of the state and the Pocono Mountains in the northeastern part. Philadelphia and Pittsburgh could see a coating.

"This is very, very unusual," said John LaCorte, a National Weather Service meteorologist in State College, Pa. "It has all the look and feel of a classic midwinter nor'easter. It's going to be very dangerous."

The last major widespread snowstorm in Pennsylvania this early was in 1972, LaCorte said.

With the temperature dropping, Wall Street protesters around the country are stockpiling donated coats, blankets and scarves, trying to secure cots and military-grade tents, and getting survival tips from the homeless people who have joined their encampments.

"Everyone's been calling it our Valley Forge moment," said Michael McCarthy, a former Navy medic in Providence. "Everybody thought that George Washington couldn't possibly survive in the Northeast."

More than a month and a half into the movement, Occupy Wall Street activists from New York to Colorado have pledged to tough out the snow, sleet and cold as they protest economic inequality and what they call corporate greed.

In New England, the first measurable snow usually falls in early December, and normal highs for late October are in the mid-50s.

"This is just wrong," said Dee Lund of East Hampton, who was at a Glastonbury garage getting four new tires put on her car before a weekend road trip to New Hampshire.

Lund said that after last winter's record snowfall, which left a 12-foot snow bank outside her house, she'd been hoping for a reprieve.

The good news, Simpson said, is that relatively warm water temperatures along the Atlantic seaboard would keep the snowfall totals much lower along the coast and in cities such as Boston. Temperatures should return to the mid-50s by midweek.

"This doesn't mean our winter is going to be terrible," he said. "You can't get any correlation from a two-day event."

Not everyone was lamenting the arrival of winter. Dan Patrylak, 79 of Glastonbury had just moved back to New England from Arizona and was picking up two new ice scrapers for his car. He said he was kind of looking forward to seeing snow on the ground again.

"In Phoenix, it's 113 all summer long," he said. "So, it just depends on where you are and what the weather is and you learn to accept that. Whatever it is, I'm going to be ready for it."