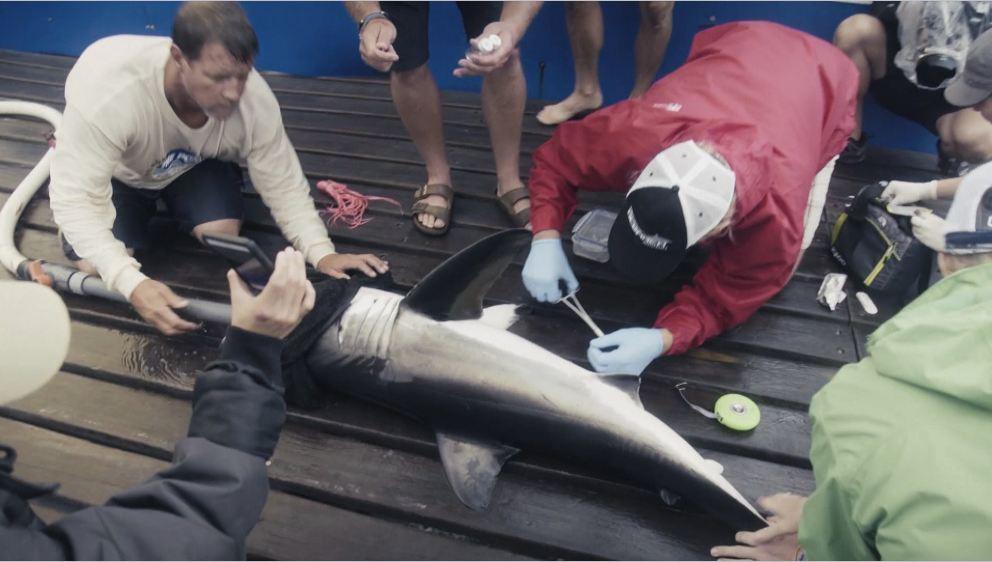 Ocearch said its team of fishermen and scientists has found the first known birthing site for great white sharks on the North Atlantic Coast. After 26 expeditions, Ocearch said the nursery in the famous waters off Montauk, Long Island is the most significant discovery they've ever made, reports CBS News correspondent Jeff Glor.

As soon as the shark slides onto a hydraulic lift, scientists and researchers rush in. By now, the process of tagging is routine for Ocearch. But the particular goal of this trip is not.

"It's kind of like step two in the science," said Chris Fischer, founder of Ocearch and the expedition's leader. "When we started this work... back in 2012, 2013, the real question was where are these sharks in the North Atlantic giving birth? Because that's where they're most vulnerable."

"Why is this spot so important for you?" Glor asked veterinary pathologist Harley Newton.

"Because this is a really unique population of animals. I mean it's a life stage that really hasn't been studied very much."

Newton is with the Wildlife Conservation Society and has been studying sharks for 16 years.

But for all the fear of sharks, she said the actual facts remain scant.

In addition to applying the tags, the team is also taking blood samples and conducting muscle biopsies, with the goal of having the shark on and off the lift in under 15 minutes. And now, the team said it's made history with the discovery of the birthing site.

"Definitely the nursery, likely the birthing site," Fischer said. "Probably the most important significant discovery we've ever made on the ocean."

Fischer's team will also determine if any of these sharks are the offspring of great whites they first encountered off Cape Cod.

"The strategy at the time was, get a tag out on big mature animals, and when you get one on a big female, 18 months later, she should lead you to the holy grail of the research, the birthing site," Fischer explained.

In 2012, "CBS This Morning" was there when a 2,000-pound female named "Genie" became the first-ever great white successfully spot-tagged in the North Atlantic.

"If we thought we were hurting these animals, we wouldn't do what we were doing," Fischer said, rejecting accusations that they may be hurting the young sharks. "We don't learn if we don't let them go in good shape. The fact of the matter is that we have to get some tracking devices on a handful of these animals so we can help them all thrive."

The team could go days without finding one shark, but on this trip, they seemed to be everywhere. This week alone, Ocearch has tagged and released nine great white sharks, including a female aptly named "Gratitude."

"She was anxious to get off," Glor said.

"She was, yeah. And she's gone, but now everybody can follow her," Fischer said.

The GPS locators now worn by the nine shark pups are only activated when the animal's dorsal fin breaks the surface. Five of them -- Gratitude included -- are now transmitting their locations off the coast of Long Island. They're expected to stay in the area until they reach adulthood at the age of 20.