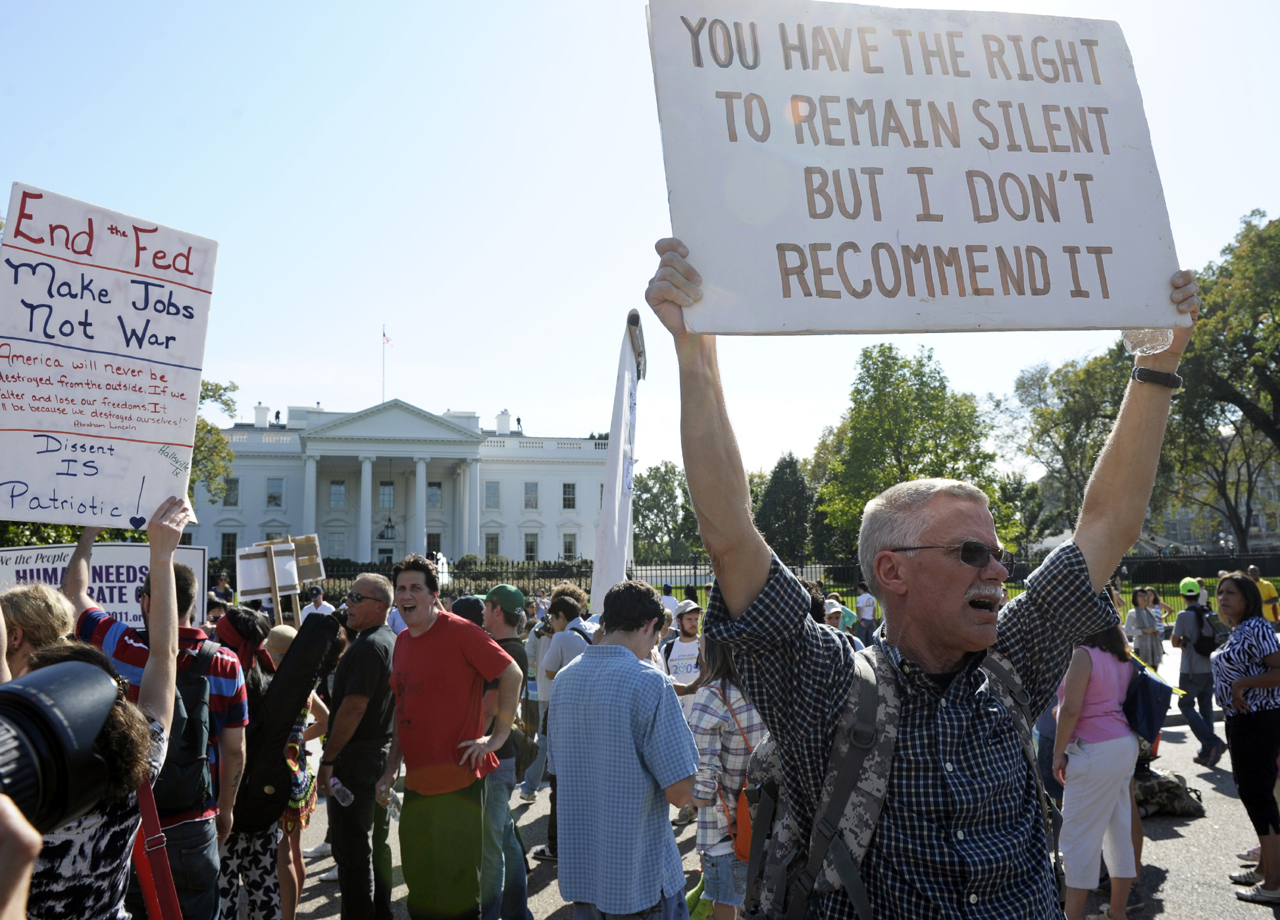 The drumbeat of the Occupy Wall Street protest is growing louder and wider.

"Wall Street got bailed out, and we all got sold out!"

From the streets of New York ... to the nation's capital ... to the South (Mobile, Ala., Jacksonville, Fla.) and West (Portland, Ore.), Americans are frustrated and making their voices heard.

"Wealthy individuals who own giant corporations have bought off our Congress and bought off our government and, you know, the people no longer have a voice anymore," one protester told CBS News.

The marchers come from all walks of life - young and old, male and female, hoping their lawmakers are listening.

"I think the message is obvious," said Jesse Lagreca, 38. "The wealthiest one percent is taking advantage of working class people. They've been selling us faulty financial products, they've been taking huge bonuses while depending on society to bail them out."

CBSMoneywatch's Jill Schlesinger points out that, according to economists at Northeastern University, corporate profits represented 88 percent of the growth in real national income between the 2Q of 2009 and 4Q of 2010, during the same period aggregate wages and salaries accounted for just over 1 percent. "The money that companies have earned during the recovery has mostly stayed within corporate America," writes Schlesinger, "and has not trickled down into higher wages, nor has it created enough jobs to put some of the 14 million unemployed Americans back to work."

"Ninety-nine percent of the people need to be prospering, not just the top one percent," said Michael Mulgrew, president of New York City's United Federation of Teachers.

"Every community knows they're hurting, what's going on is wrong, and it's time to stop this and make a difference, and do things that allow all people to prosper."

On "The Early Show" Monday, Former Senator Russell Feingold, D-Wis., said of the protests spreading across the country, "I'm not just pleased about it, I'm excited about it."

He reflected on the pro-labor demonstrations in Wisconsin earlier this year that were sparked by the governor's fight to take away collective bargaining rights from public sector workers in his state. "We did it here, and I think this is going to happen all over the country," Feingold said, "because people have been kicked when they are down, over and over again. You can only kick people so long before they react.

"This is time now for accountability, and this is a good way to show people how strongly we feel. The working people of this country have been treated very brutally and it has to change."

The protesters' ire has even reached the race for president.

GOP candidate and Florida businessman Herman Cain had no sympathy for the protesters or their message. On CBS' "Face the Nation" Sunday, Cain said protesters are acting out of "jealousy" for bankers' success, and suggested demonstrators who complain that they are jobless are just "playing the victim card."

"It's anti-American because to protest Wall Street and the bankers is basically saying that you're anti-capitalism," Cain told Bob Schieffer.

The protests have also angered those who work on Wall Street who believe they are being wrongly demonized.

"I think that there's an overall paralysis in government and people are frustrated, I get that," sauid trader Jason Weisberg. "But, you know, it's being vented to the wrong place."

On "60 Minutes" Sunday Jeffrey Immelt, the CEO of General Electric, denied that the American people are anti-corporation.

"You know, everybody in Germany roots for Siemens," Immelt told Lesley Stahl. "Everybody in Japan roots for Toshiba. Everybody in China roots for China South Rail. I want you to say, 'Win, G.E.'"

"Do you not see any reason that maybe the public doesn't hold American corporations up here in the highest ...?" asked Stahl.

"I think this notion that it's the population of the U.S. against the big companies is just wrong. It's just wrong-minded," he replied.

On "The Early Show," Feingold, D-Wis., said in response to a clip of the GE CEO's statement, "Well, Mr. Immelt is not recognizing that you root for corporations when corporations are making sure your jobs stay here in the United States. His corporation has had more to do with shipping jobs overseas than almost any corporation in the world.

"And so the deal here is, we root for corporations and we support them if they are fair to us," Feingold said. "But these people who are protesting are recognizing that just about everything that has happened to working people has been unfair in recent years. You have the greed on Wall Street; you have the very wealthy insisting they not contribute at all to solving our deficit and our debt problems; you have corporations buying up the political process through secret donation. People have had it.

"And it's time to say not 'We hate corporations,' but people have to acknowledge the pain and the suffering that is going on throughout this country," said Feingold, who recently started the PAC Progressives United.

Feingold, who recently started the PAC Progressives United, also had words for Herman Cain's anti-protest screed: "There is nothing more un-American than a person like Mr. Cain trying to intimidate people from exercising their right to protest. There is nothing MORE American than peaceful protest.

"And if people are being hurt, if they can't get a job, and students go to school for five or six years and take out student loans and come out and see they are getting no job and no opportunity and people on Wall Street continue to get whatever they want or are not properly regulated, that's the time to protest. This is the time to protest. It is most American thing you can do," Feingold said.

"You can change the world, and the world changes, and this is how it changes," Lewis told "Sunday Morning." Now, whether this is the movement that will change the world, I can't tell you. But it does seem they have justice on their side."