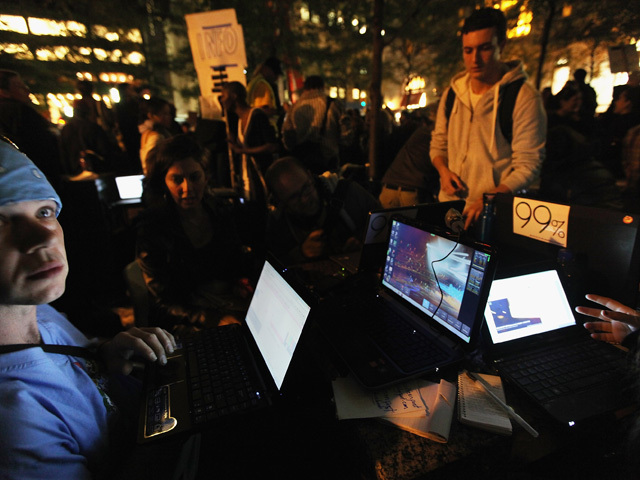 (CBS) - Social media has been an important tool for protesters overseas. Now that the Occupy Wall Street protests have reached a tipping point, the abundance of online organizing is staggering.

On July 13, 2011, the magazine Adbusters posted a call to occupy Wall Street on their blog.

"On September 17, we want to see 20,000 people flood into lower Manhattan, set up tents, kitchens, peaceful barricades and occupy Wall Street for a few months. Once there, we shall incessantly repeat one simple demand in a plurality of voices," the post said.

When CNN reported that "hundreds" of people showed up, it seemed like a success for the cause. Everyone could return to business as usual, right?

Not so fast. The camps in downtown Manhattan have only gotten larger and the protests have spread to other cities across the U.S.

Once we took a closer look at the movement and how it was being organized, we were impressed. The protesters used all forms of social media keep the movement alive.

Facebook pages have popped up for major cities across the country. Twitter hashtags have been established for communication at general assemblies. Countless videos have been posted to YouTube, Vimeo and Livestream. We found some moving personal accounts of job loss and helplessness shared on the blog, "We are the 99 percent."

It's remarkable to see Middle East's protest tactics being used in a free speech society. For a movement that claims no leader, it is highly organized, making off-shoots easy to start.

Occupy Wall Street even got an Internet meme.

The Occupy Sesame Street meme puts the central characters of the children's show in the shoes of regular Americans, with one Twitter user tweeting, "Truly outrageous that 99% of the cookies are consumed by 1% of the monsters on PBS. #occupysesamestreet."

You have to love technology!

Meetup groups have formed in 872 cities across the U.S., using the Occupy Together website as a central hub. We look forward to seeing the status updates, tweets, Instagrams...you get it.