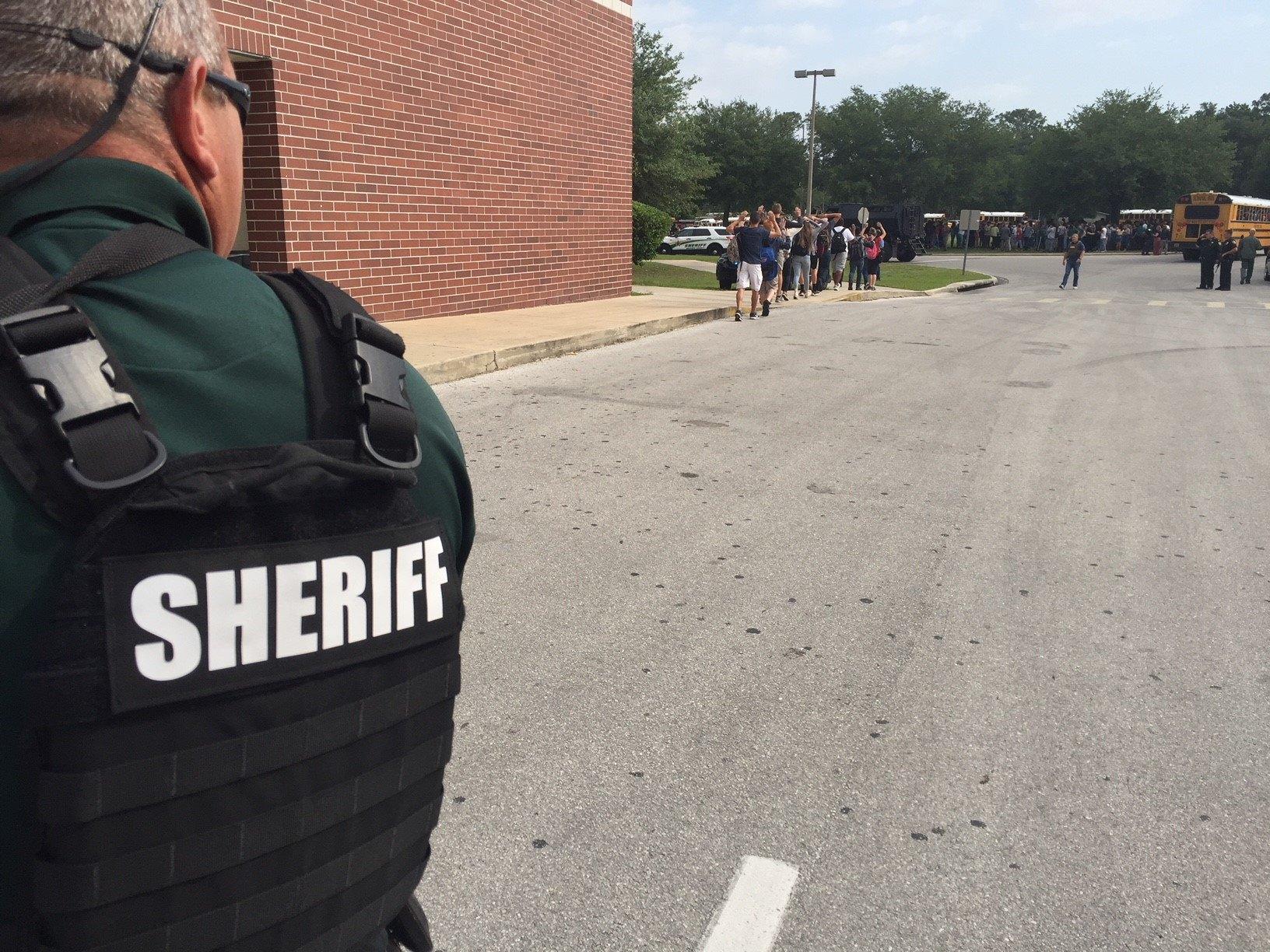 OCALA , Fla. -- A gunman who wounded one student at a Florida high school on the day of a national classroom walkout to protest gun violence has been identified as 19-year-old Sky Bouche, authorities said. Bouche was taken into custody by a school resource officer who rushed to the scene.

The shooting happened Friday morning at Forest High School in Ocala, which was put on lockdown, the Marion County Sheriff's Office reported. The injured student, a 17-year-old boy, was taken to a local hospital for treatment of a non-life threatening injury to his ankle.

Police initially said the suspect is also a student at the school, but later said he was not currently enrolled. The gunman carried a shotgun in a guitar case into the school by blending in with students, said Craig Ham, deputy superintendent of Ocala schools operations. Ham told reporters the shooter fired at the bottom of a classroom door, which was locked, and pellets struck the victim in the ankle.

As he was being led away by deputies, Bouche told reporters, "I shot through the door." When reporters asked him why he opened fire and whether he had a relationship with the victim, Bouche replied, "I didn't see anyone."

The suspect was quickly taken into custody by a school resource officer identified as Marion County Sheriff's Deputy James Long.

A video that appeared to show officers responding to the shooting was posted to Twitter.

The Ocala shooting comes just over two months after a gunman killed 17 people and wounded 17 others at Marjory Stoneman Douglas High School in Parkland, Florida. Nikolas Cruz, 19, faces the death penalty if convicted in that mass shooting.

The Ocala shooting also coincided with a nationwide student walkout to protest gun violence on the 19th anniversary of the 1999 massacre at Colorado's Columbine High School. The Ocala school planned its version of a walkout, students said.

Chris Oliver told the Ocala Star-Banner that his 16-year-old son, a Forest student, told him the shooting happened near his classroom. The boy told Oliver the shooter was standing in a hallway and fired at a closed classroom door. The shooter then dropped an unspecified weapon, ran and tried to hide, the boy told his father.

Students and teachers had been prepared for such alerts and leapt into action to barricade the classroom's one door and block the door's window.

Mailhiot said about 15 people in the classroom waited over 30 minutes to be evacuated by Ocala police. They were instructed to leave the room with their hands up, he said.

The school had planned to participate around 11 a.m. in a walkout commemorating the Columbine shooting. Mailhiot said he had hesitated to participate in the walkout because he was worried the large crowd outside the school would present a large target for anyone waiting to cause a disturbance.

"I worried if something was to happen, that's where it would happen," Mailhiot said.

Marion County schools Superintendent Heidi Maier decided six weeks ago that any students who walked out would be punished. Instead, Maier instructed the seven mainstream high school principals to meet with their school's student body to develop a topic of discussion for a 30-minute session. All such events were canceled Friday.

After the shooting, all students were bused to First Baptist Church of Ocala, where parents gathered to pick them up, officials said. The buses were escorted to the church by officers on motorcycles.

Rachael Carter was at the church waiting to be reunited with her daughter, a 10th-grader who turned 16 this week. Carter's pastor called her when he saw a post on social media.

"I'm shaking like a leaf in a hurricane," Carter said.

She that once she is reunited with her daughter, she would "stick to her like Velcro."

Students who saw anything related to the shooting were separated so they could be interviewed by investigators.

School district spokesman Kevin Christian sent a recorded phone message to parents by phone urging them to stay away from the school.

CBS affiliate WKMG reports that Gov. Rick Scott tweeted that he's been briefed on the shooting, and he offered any state support that Marion County may need.

Ocala police, the sheriff's office, the Florida Highway Patrol and the FBI were investigating the shooting. They divided into teams that cleared all buildings, vehicles and the parking lot area. Once all students were off campus, authorities began conducting a more methodical search of the campus.

Forest High has an enrollment of more than 2,000 students, according to the National Center for Education Statistics.