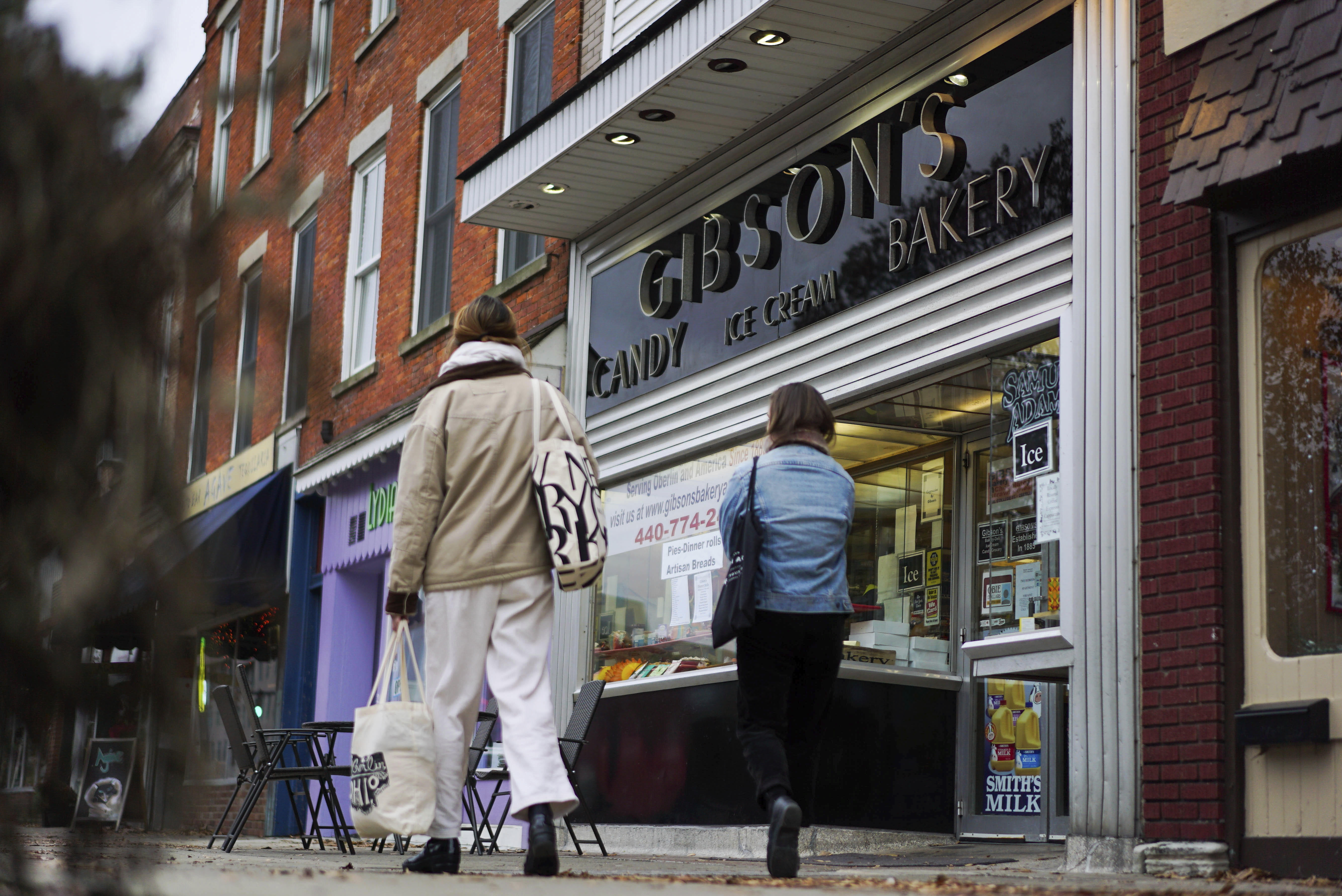 OBERLIN, Ohio -- Students at Oberlin College have long enjoyed pastries, bagels and chocolates from Gibson's Bakery, a century-old, family-owned business near campus. That sweet relationship has turned bitter amid hotly disputed accusations of racism, roiling a school and town long known for their liberal politics.

The dispute, which began in November 2016 with the arrest of three black Oberlin students who were accused of stealing wine from Gibson's, is now a lawsuit in which the exasperated bakery owners accuse the college and a top dean of slandering Gibson's as a "racist establishment" and taking steps to destroy the family's livelihood.

Caught in the middle are longtime residents of this town of 8,300 people, many of whom identify themselves as liberals but who have patronized Gibson's for decades. Many believe the timing was right for the conflict to boil over; the arrests came the day after Donald Trump won the presidential election, electrifying students who had long heard suspicions of racial profiling at Gibson's.

A member of the Black Student Union at Oberlin College told CBS affiliate WOIO-TV last month that other students have accused the bakery of racial profiling.

"Multiple students have had accounts of being followed around the store, being accused of stealing, having to turn their pockets out when they weren't stealing anything just because they were black or brown students," the student, who didn't give a name, said.

The three students were arrested after punching and kicking the white shopkeeper. The 18- and 19-year-old students said that they were racially profiled and that their only crime was trying to buy alcohol with fake identification; the shopkeeper, Allyn Gibson, said the students attacked him after he caught them trying to steal bottles of wine.

The day after the arrests, hundreds of students protested outside the bakery. Members of Oberlin's student senate published a resolution saying Gibson's had "a history of racial profiling and discriminatory treatment."

"I can understand why people were looking for some outlet for their frustration, but it's just counterproductive to bend that anger towards a small family business that to my knowledge is not guilty of the sort of racial profiling that people accuse it of," said retired Oberlin professor Roger Copeland.

Few colleges put the "liberal" into "liberal arts" more than Oberlin, which in the early 1800s became the first in the country to regularly admit women and minorities. But it also more recently has become, for conservatives, a symbol of political correctness gone awry and entitled youth.

News articles in 2015 quoted students decrying the school dining hall's sushi and Vietnamese banh mi sandwiches as cultural appropriation. The divisive, voice-of-a-generation actress Lena Dunham, famously a 2008 Oberlin alumna, was quoted in Food & Wine magazine as saying, "The press reported it as, 'How crazy are Oberlin kids?' But to me, it was actually, 'Right on.'"

With Oberlin's reputation preceding it and news of the Gibson's protests spreading online, bikers and out-of-town counter-protesters soon converged on the town to jeer students and buy doughnuts from Gibson's. Conservatives derided the students on social media as coddled "snowflakes" with a mob mentality, while students attacked the store as a symbol of systemic racism.

The three students arrested at Gibson's pleaded guilty in August to attempted theft and aggravated trespassing and said in statements required by a plea agreement that their actions were wrong and that the store wasn't racist.

Even so, students continue to boycott Gibson's over perceived racial profiling, causing business to suffer. Pressed by a reporter to provide evidence or examples of profiling, they said only that when black students enter the store, they feel as though they're being watched.

"Racism can't always be proven on an Excel sheet," said Kameron Dunbar, an Oberlin junior and vice chair of the student senate. Copeland and other residents say the accusations of racism are unfounded.

"I've never seen evidence; it's always hearsay," Copeland said. "When your fellow student is shutting down a conversation because he or she is made uncomfortable, it leads to a hive mentality."

On Nov. 7, the Gibsons sued Oberlin and Meredith Raimondo, vice president and dean of students, for slander, accusing faculty members of encouraging demonstrations against the bakery by suspending classes, distributing flyers, and supplying protesters with free food and drink.

It says Raimondo took part in the demonstration against Gibson's with a bullhorn and distributed a flyer that said the bakery is a "RACIST establishment with a LONG ACCOUNT of RACIAL PROFILING and DISCRIMINATION."

Dave Gibson, the bakery's owner, says the lawsuit is about standing up for his right to crack down on shoplifting without being branded as a racist. The suit says Oberlin demanded that he stop pushing criminal charges on first-time shoplifters and call school deans instead.

"I have not taken a paycheck since this happened more than a year ago," Gibson said in an email. "Sometimes you have to stand up to a large institution. Powerful institutions -- including Oberlin College -- and their members must follow the same laws as the rest of us."

Gibson's loses thousands of dollars to theft, the lawsuit said. It rejects any accusations of racial bias, pointing to police figures in the past five years that show only 6 out of 40 adults arrested for shoplifting at the bakery were black.

The school said in a statement after the lawsuit was filed that it and Raimondo deny Gibson's claims and that the college has stopped buying the bakery's goods, ending what had been a decades-long relationship. Raimondo did not respond to an email seeking comment.

Attempts by the Oberlin Business Partnership to mediate between the school and bakery ended in failure, said partnership Director Janet Haar, with neither side appearing to be interested.

The clash has inspired Oberlin senior Jake Berstein, who said he witnessed the initial altercation, to produce a podcast trying to create a conversation that "isn't being had" between the two sides.

"Gibson's has become all that is wrong with America," Berstein said. "It's a classic case of those political bubbles that don't communicate with each other, and don't want to."