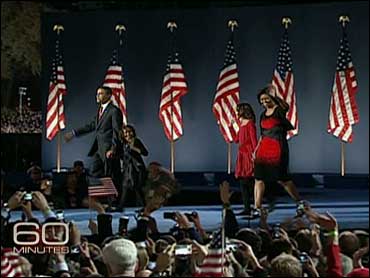 The president-elect has a lot of decisions to make in the weeks and months ahead, and some promises to keep. One of them is to his daughters. When they began lobbying him two years ago to get a dog, he put them off by saying we'll get one when we move into the White House. And the girls haven't forgotten.


Steve Kroft: How are things coming on the dog front?

Michelle Obama: The dog, the dog front? We're on-call mode on the dog front. Because the deal with the dog was that we would get the dog after we got settled. Because as responsible owners, I don't think it would be good to get a dog in the midst of transition. So when we settle, get in a routine, we think about late winter, early spring, we're gonna get the dog. Now, we cut that deal with the kids before America knew about it. So they're good with it.

Michelle Obama: They're ready for us to get the dog now.

Mr. Obama: They are ready.

Kroft: We put the paper down here just in case.

Michelle Obama: Is that…

Mr. Obama: I was wondering what that was for.

Kroft: You brought it today.

Mr. Obama: I thought it was some trick for the lighting or something.

Obama On Economic Crisis, Transition
The Obamas On Their Personal Transition

Kroft: Do you have a special transition team for the dog? Or are you just doing that?

Michelle Obama: We don't…. This is a family event. We're getting a lot of suggestions though. Boy, I mean the people are sending suggestions. And we're taking it all under advisement.

Kroft: There's been a lot of talk about [that] you talked about your mother-in-law. Is she moving in with you?

Mr. Obama: Well, I don't tell my mother-in-law what to do. But I'm not stupid. That's why I got elected president, man.

Kroft:She can if she wants to.

Mr. Obama: But, she sure can if she wants. I think it's fair to say that Marian Robinson is one of the unsung heroes of this campaign. We couldn't have done it without her. 'Cause she retired, looked after the girls, gave Michelle confidence that somebody was gonna be there when Michelle was on the road.

She's just been an unbelievable support for all of us during this process. And you know, she likes her own space, you know. She doesn't like a lot of fuss around her. And, like it or not, there's some fuss in the White House. But we hope that she comes.

Kroft: So you have a new dog and your mother-in-law moving in.

Mr. Obama: Steve, I'm not gonna compare my mother-in-law to a new dog.

Kroft: You're much more excited about your mother-in-law

Mr. Obama: How do you get in long with your mother-in-law man? You know, the way these questions are going I think I need to give you some tips.

Kroft: We get along fine. I have one last question. As president of the United States, what can you do, or what do you plan to do, about getting a college football playoff for the national championship?

Mr. Obama: This is important. Look, excuse me for a second.

Mr. Obama: I think any sensible person would say that if you've got a bunch of teams who play throughout the season, and many of them have one loss or two losses, there's no clear decisive winner that we should be creating a playoff system.

Eight teams. That would be three rounds, to determine a national champion. It would it would add three extra weeks to the season. You could trim back on the regular season. I don't know any serious fan of college football who has disagreed with me on this. So, I'm gonna throw my weight around a little bit. I think it's the right thing to do.