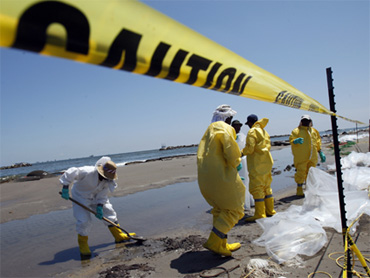 The new presidential commission investigating the Gulf oil spill will include two experts who have been active on the subject of global warming, including one who wrote just last month that the country should redouble efforts to lessen its dependence on oil, The Associated Press has learned.

Together, the backgrounds of the four panel members selected so far suggest the commission will look at more than just what went wrong, including the bigger picture of the country's conflicting environmental and energy needs.

The third and fourth commission members are Donald Boesch, president of the University of Maryland's Center for Environmental Science, and former Alaska Lt. Gov. Fran Ulmer, currently University of Alaska Anchorage chancellor, the AP has learned. The appointments were expected to be announced publicly soon.

"These appointments portend an impact in both the policy and science of coastal management and restoration and oil spill response," said Virginia Burkett, the Louisiana-based chief climate change scientist for the U.S. Geological Survey. She praised both picks.

Wes Tunnell of Texas A&M University Corpus Christi said the selections indicate the panel will look at broad energy policies. "That's too bad," he said. "We need to focus on what happened here and what we can learn from this."

President Barack Obama hinted as much Wednesday in a speech in Pittsburgh, saying he was naming the commission "so that the American people will have answers on exactly what happened." But he added: "We have to acknowledge that there are inherent risks to drilling four miles beneath the surface of the Earth, and these are risks that are bound to increase the harder oil extraction becomes. We also have to acknowledge that an America run solely on fossil fuels should not be the vision we have for our children and our grandchildren."

Boesch is a native of New Orleans and a biological oceanographer who has been a leader in studying how man affects coastal areas. He helped write two books on oil spills and the environment and was the first executive director of the Louisiana Universities Marine Consortium and a prominent researcher in the Gulf of Mexico dead zone.

Boesch was a co-author of last year's massive federal study on how global warming will affect Americans' daily lives. He has chaired four large studies by the National Academies of Sciences, all on coastal environmental and science issues. And he has written more than 70 research studies published in scientific journals.

In a May 9 column for the Washington Post's website, Boesch wrote that the spill might be part of what he called "the winds of change" on oil and energy. He acknowledged, however, that the amounts of oil spilled from offshore development have been less than spilled in tanker accidents.

"Earlier I commented here that expanded offshore production would not significantly reduce dependence on foreign oil and that we should be redoubling our efforts to get off oil," Boesch wrote. "I hope for Earth's sake that the winds will blow Congress out of its long-winded debate."

Tunnell said the appointment of Boesch, who donated $750 to Obama's presidential campaign, is "a good thing; he's got a long history of helping marine science." Burkett said he's an excellent communicator of science.

In the oil-based economy of Alaska, Ulmer said during a failed campaign for governor that she strongly supported opening the Arctic National Wildlife Refuge for oil and gas drilling. But she was criticized in the state for not supporting drilling enthusiastically enough.

Ulmer, who was lieutenant governor from 1994 to 2002 and a Democratic leader in the Alaska House before that, was defeated in 2002 by then Sen. Frank Murkowski.

She later taught at the University of Alaska Anchorage and was named its chancellor, the No. 2 position there. She announced her retirement earlier this year.

Ulmer, a lawyer and former mayor of Juneau, has also been a member of the Commission on Arctic Climate Change run by the Aspen Institute, a Colorado think tank.

Thomas Lovejoy, former president of the Heinz Center for the Environment, serves on that panel with Ulmer and praised her.

"Fran is a very accomplished academic administrator, understands scientific issues well, is very evenhanded," Lovejoy said. "She knows what the story is and what the science says."

He added: "The three (panel members) that I know well, Bill Reilly, Bob Graham and Fran are people who are really solid and have a lot of experience in environmental issues. They'd be on anybody's panel."