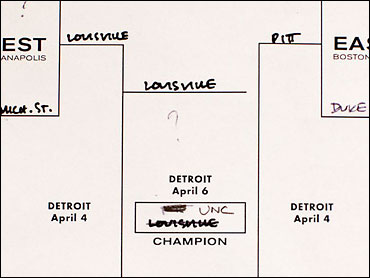 (ESPN)
If you're looking for guidance in your NCAA Men's Basketball Tournament pool, you now have a new source to turn to for guidance: President Obama.

ESPN has posted the bracket filled out by Mr. Obama, who predicts that the North Carolina Tar Heels will win the tournament.

The president, who reportedly consulted with press secretary Robert Gibbs on his picks, broke down his picks for ESPN's Andy Katz on Tuesday in the White House map room.

He seemed to know his stuff: Among the president's observations was that "the Pac-10 has been looking pretty weak this year," that Pittsburgh's DeJaun Blair "is a man," and that Oklahoma, despite having player of the year Blake Griffin, only has about seven players who get playing time – and in that situation "you start getting worn down."

The president's bracket, in which teams are crossed out, reflects a lack of self-assurance familiar to anyone who has had to figure out who will make it to the final four. Here's his South region: 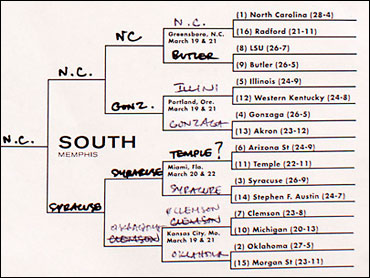 (ESPN)
Some upsets chosen by the president were No. 11 VCU over No. 6 UCLA and No. 11 Temple over No. 6 Arizona State; he said he took Duke into the elite eight because of personal aide Reggie Love, but he had them losing there to Pittsburgh – a city where he had "good luck" during the presidential campaign.

The president said he chose North Carolina because of their "experience and balance" – and that he was unconcerned about guard Ty Lawson's injured toe because "I've got to assume that he's coming to play."

He also offered a personal message to the team: "Now, for the Tar Heels who are watching, I picked you all last year -- you let me down. This year, don't embarrass me in front of the nation, all right? I'm counting on you. I still got those sneakers you guys gave me."

The president's full bracket is here. You can watch the games starting tomorrow on CBS and online at http://mmod.ncaa.com/. And it's not too late to fill out a bracket.