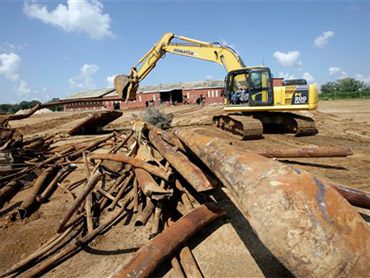 For years, the Bush administration was criticized for not cleaning up enough of the nation's most contaminated waste sites. The Obama administration plans to do even less.

Environmental groups and some Democratic lawmakers railed against President George W. Bush's cleanup record. But this time, they're shying away from speaking out against a popular president who's considered an ally in the fight to clean up the environment.

In Mr. Obama's first two years in office, the Environmental Protection Agency expects to begin the final phase of cleanup at fewer Superfund sites than in any administration since 1991, according to budget documents and agency records. The EPA estimates it will finish construction to remove the last traces of pollution at 20 sites in 2009 and 22 sites in 2010.

During the eight years of the Bush administration, the agency finished construction at 38 sites on average a year.

"Certainly, we are very disappointed that we can't get our ... numbers up," said Elizabeth Southerland, the acting deputy of the EPA's hazardous waste cleanup program, known as Superfund.

The explanation by the Obama team is the same one put forward time and time again by Bush officials: The sites on the list have become increasingly complicated, contaminated and costly. That means it takes years for sites to reach the final cleanup stage, and as a result fewer are getting there.

Of the 527 contaminated properties still needing cleanup on the Superfund list, 40 have progressed to the point where all that's left is removing the last piles of contaminated soil, building a treatment plant to strip the groundwater of toxic pollutants, or capping a landfill so contamination does not enter the drinking water or air in surrounding neighborhoods.

At the other 1,060 hazardous waste sites still on the list, construction is finished and the last stages of the cleanup are under way - a process begun before Mr. Obama took office.

When EPA Administrator Lisa Jackson explained this trend to a Senate committee this year, Sen. Barbara Boxer, D-Calif., replied: "That's the same answer the Bush administration gave us and I don't buy it."

Later, in an interview with The Associated Press, Boxer elaborated. "It doesn't matter to me who the president is. What matters to me is these sites get cleaned up," she said.

But not everyone is so critical of Mr. Obama's Superfund numbers.

Environmental groups such as the Sierra Club and some Democratic lawmakers who highlighted how little the Bush administration did on hazardous waste cleanups are now silent. They say it's because Mr. Obama, unlike Bush, wants to address the problem that has plagued Superfund for years - a lack of money.

A tax on petroleum, chemicals and large companies once helped EPA pay for the multimillion dollar cleanups. It expired in 1995 and Superfund has been on financial life support since.

The pool of money ran dry in 2004, when Superfund cleanups that did not have a company to foot the bill ceased to be subsidized by the tax on polluters and started being paid by taxpayers.

"This administration is not willing to limp along. That's a profound difference," he said.

Supporters also point out that the Obama administration has asked for slightly more money in its budget for Superfund - $1.31 billion compared with the $1.29 billion in Bush's last year. There's also an extra $600 million from the economic stimulus plan for cleanups at 50 sites across the country.

But neither has helped boost the number of sites ready for the final stage of cleanup, although they could down the road.

Since October, the EPA has installed the equipment necessary to complete cleanups at five sites in New York, Kansas, Missouri and New Jersey. At one of those sites, a former metal-plating facility in Franklin, N.J., it will take 30 more years for the treatment plant installed in June to remove the heavy metals and organic compounds in the water beneath the property so that it meets water quality standards.

The site was one of the first to be placed on the Superfund list in 1983.

Forty other sites in 19 states are ready for their last construction project, according to the EPA. While the Obama administration is working to address all of them this year or next, it can't guarantee it.

Cleanups come with surprises. Workers can discover contamination they didn't know existed, leading to a new series of delays.

Southerland, the Superfund manager, says that has happened more often in recent years as money has been more targeted on the cleanup, rather than studies to map out the contamination.

"The problems are the same," said Katherine Probst, an expert on Superfund at the Washington, D.C.-based think tank Resources for the Future. "The point is they need more money, whether it is under Bush or Obama."

In the meantime, EPA officials say they are looking to find a new way to measure Superfund progress.