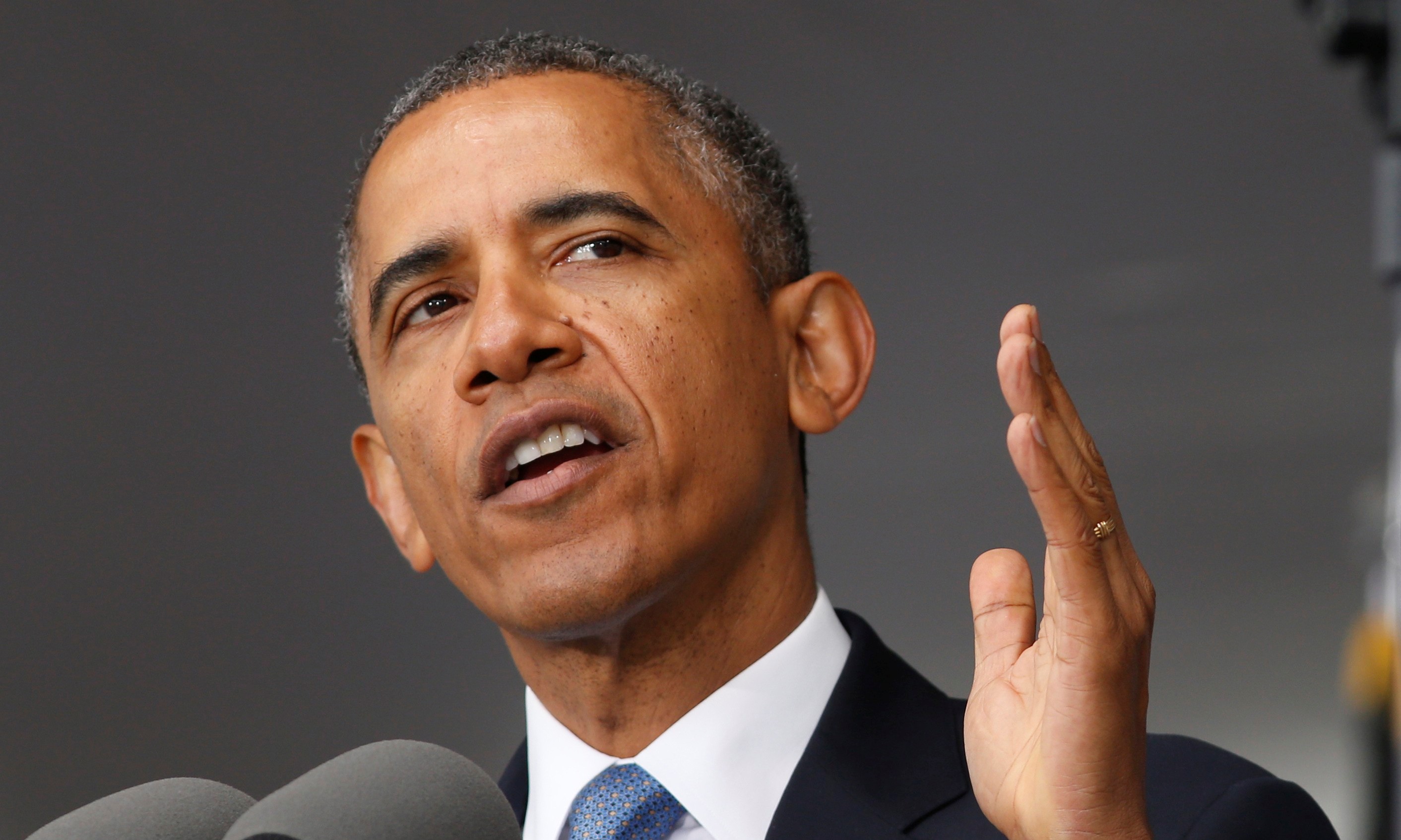 "America must always lead on the world stage. If we don't, no one else will," President Obama told the graduating class at the United States Military Academy at West Point on Wednesday.

Responding to critics that have cast his foreign policy as feckless and weak, Mr. Obama used the commencement address to make the case that his leadership has positioned the U.S. to be a nation that leads by example and that the United States has never been stronger than it is now.

"Those who argue otherwise - who suggest that America is in decline, or has seen its global leadership slip away - are either misreading history or engaged in partisan politics," Mr. Obama said.

The president reassured the cadets that the military is the backbone of U.S. leadership but that it must be used with restraint.

"Just because we have the best hammer does not mean that every problem is a nail," he said, defining his leadership style in contrast to the overzealous interventions of the Bush era.

"It is a particularly useful time for America to reflect on those who have sacrificed so much for our freedom," Mr. Obama said, "for you are the first class to graduate since 9/11 who may not be sent into combat in Iraq or Afghanistan."

Mr. Obama summarized how his foreign policy, based on a strong reliance on multilateral diplomacy, applies to hot spots across the globe. He said the U.S. will "step up our efforts to support Syria's neighbors" as its civil war drags on. He urged Congress to ramp up support for Syria, as well as to "lead by example" by on issues like limiting domestic surveillance, acknowledging international treaties and closing the prison at Guantanamo Bay.

Mr. Obama also declared that terrorism remains "the most direct threat to America at home and abroad" and asked Congress to support a new Counterterrorism Partnerships Fund.

Here are excerpts from Mr. Obama's speech that touched on a range of global flashpoints:

This leads to my second point: for the foreseeable future, the most direct threat to America at home and abroad remains terrorism. But a strategy that involves invading every country that harbors terrorist networks is naïve and unsustainable. I believe we must shift our counter-terrorism strategy - drawing on the successes and shortcomings of our experience in Iraq and Afghanistan - to more effectively partner with countries where terrorist networks seek a foothold.

This reflects the fact that today's principal threat no longer comes from a centralized al Qaeda leadership. Instead, it comes from decentralized al Qaeda affiliates and extremists, many with agendas focused in the countries where they operate. This lessens the possibility of large-scale 9/11-style attacks against the homeland, but heightens the danger to U.S. personnel overseas, as we saw in Benghazi; or less defensible targets, as we saw in a shopping mall in Nairobi.

Now, as we move to a train and advise mission in Afghanistan, our reduced presence there will allow us to more effectively address emerging threats in the Middle East and North Africa. Earlier this year, I asked my national security team to develop a plan for a network of partnerships from South Asia to the Sahel. Today, as part of this effort, I am calling on Congress to support a new Counter-Terrorism Partnerships Fund of up to $5 billion, which will allow us to train, build capacity, and facilitate partner countries on the front lines. These resources will give us flexibility to fulfill different missions, including training security forces in Yemen who have gone on the offensive against al Qaeda; supporting a multinational force to keep the peace in Somalia; working with European allies to train a functioning security force and border patrol in Libya; and facilitating French operations in Mali.

Tragically, no American security operation can eradicate the threat posed by an extremist group like Boko Haram. That is why we must focus both on rescuing those girls, but also on supporting Nigerian efforts to educate its youth. Indeed, this should be one of the hard-earned lessons of Iraq and Afghanistan, where our military became the strongest advocate for diplomacy and development. Foreign assistance isn't an afterthought - something nice to do apart from our national defense. It's part of what makes us strong.

Ukraine: An uncertain future, but a chance for democracy

In Ukraine, Russia's recent actions recall the days when Soviet tanks rolled into Eastern Europe. But this isn't the Cold War. Our ability to shape world opinion helped isolate Russia right away. Because of American leadership, the world immediately condemned Russian actions. Europe and the G-7 joined with us to impose sanctions. NATO reinforced our commitment to Eastern European allies. The IMF is helping to stabilize Ukraine's economy. OSCE monitors brought the eyes of the world to unstable parts of Ukraine. This mobilization of world opinion and institutions served as a counterweight to Russian propaganda, Russian troops on the border, and armed militias. This weekend, Ukrainians voted by the millions; yesterday, I spoke to their next President. We don't know how the situation will play out, and there will be grave challenges. But standing with our allies on behalf of international order has given a chance for the Ukrainian people to choose their future.

As frustrating as it is, there are no easy answers - no military solution that can eliminate the terrible suffering anytime soon. As President, I made a decision that we should not put American troops into the middle of this increasingly sectarian civil war, and I believe that is the right decision. But that does not mean we shouldn't help the Syrian people stand up against a dictator who bombs and starves his people. And in helping those who fight for the right of all Syrians to choose their own future, we also push back against the growing number of extremists who find safe-haven in the chaos.

With the additional resources I'm announcing today, we will step up our efforts to support Syria's neighbors - Jordan and Lebanon; Turkey and Iraq - as they host refugees, and confront terrorists working across Syrian borders. I will work with Congress to ramp up support for those in the Syrian opposition who offer the best alternative to terrorists and a brutal dictator. And we will continue to coordinate with our friends and allies in Europe and the Arab World - to push for a political resolution of this crisis, and make sure that those countries, and not just the United States, are contributing their fair share of support to the Syrian people.

Iran: Best chance in a decade for a breakthrough

Similarly, despite frequent warnings from the United States, Israel, and others, the Iranian nuclear program steadily advanced for years. But at the beginning of my presidency, we built a coalition that imposed sanctions on the Iranian economy, while extending the hand of diplomacy to the Iranian government. Now, we have an opportunity to resolve our differences peacefully. The odds of success are still long, and we reserve all options to prevent Iran from obtaining a nuclear weapon. But for the first time in a decade, we have a very real chance of achieving a breakthrough agreement - one that is more effective and durable than what would be achieved through the use of force. And throughout these negotiations, it has been our willingness to work through multilateral channels that kept the world on our side.

Urging Congress to lead by example, in the South China Sea, Gitmo, and elsewhere

It's a lot harder to call on China to resolve its maritime disputes under the Law of the Sea Convention when the United States Senate has refused to ratify it - despite the repeated insistence of our top military leaders that the treaty advances our national security. That's not leadership; that's retreat. That's not strength; that's weakness. And it would be utterly foreign to leaders like Roosevelt and Truman; Eisenhower and Kennedy.

I believe in American exceptionalism with every fiber of my being. But what makes us exceptional is not our ability to flout international norms and the rule of law; it's our willingness to affirm them through our actions. That's why I will continue to push to close GTMO - because American values and legal traditions don't permit the indefinite detention of people beyond our borders. That's why we are putting in place new restrictions on how America collects and uses intelligence - because we will have fewer partners and be less effective if a perception takes hold that we are conducting surveillance against ordinary citizens.

That spirit of cooperation must energize the global effort to combat climate change - a creeping national security crisis that will help shape your time in uniform, as we're called on to respond to refugee flows, natural disasters, and conflicts over water and food. That's why, next year, I intend to make sure America is out front in a global framework to preserve our planet.

You see, American influence is always stronger when we lead by example. We cannot exempt ourselves from the rules that apply to everyone else. We can't call on others to make commitments to combat climate change if so many of our political leaders deny that it is taking place

Empowering partners is a large part of what we've done in Afghanistan. Together with our allies, America struck huge blows against al Qaeda core, and pushed back against an insurgency that threatened to overrun the country. But sustaining this progress depends on the ability of Afghans to do the job. That's why we trained hundreds of thousands of Afghan soldiers and police. Earlier this spring, those forces secured an election in which Afghans voted for the first democratic transfer of power in their history. At the end of this year, a new Afghan President will be in office, and America's combat mission will be over.

Drone strikes: The military must be transparent

Let me make one final point about our efforts against terrorism. The partnership I've described does not eliminate the need to take direct action when necessary to protect ourselves. When we have actionable intelligence, that's what we do - through capture operations, like the one that brought a terrorist involved in the plot to bomb our Embassies in 1998 to face justice; or drone strikes, like those we have carried out in Yemen and Somalia. But as I said last year, in taking direct action, we must uphold standards that reflect our values. That means taking strikes only when we face a continuing, imminent threat, and only where there is near certainty of no civilian casualties. For our actions should meet a simple test: we must not create more enemies than we take off the battlefield.

I also believe we be more transparent about both the basis for our actions, and the manner in which they are carried out - whether it is drone strikes, or training partners. I will increasingly turn to our military to take the lead and provide information to the public about our efforts. Our intelligence community has done outstanding work and we must continue to protect sources and methods. But, when we cannot explain our efforts clearly and publicly, we face terrorist propaganda and international suspicion; we erode legitimacy with our partners and our people; and we reduce accountability in our own government.