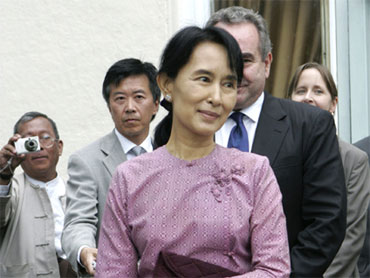 "Obama brought that up directly with that government," Gibbs said, indicating that the president spoke directly to Thein Sein.

For decades, Western governments have avoided direct contacts with leaders of Myanmar because of the regime's poor human rights record and suppression of democracy.

A joint statement to be issued after the summit - their first ever between a U.S. president and the Association of Southeast Asian Nations - is expected to devote an entire section on Myanmar, a major irritant in relations between the two sides.

The statement is not expected to contain a U.S. proposal to call for the release of political prisoners, including Suu Kyi, who has spent 14 of the last 20 years under detention by the military regime.

But a direct appeal from Mr. Obama carries more weight as he is the most powerful leader to have conveyed the message directly to a top Myanmar official.

Before the summit, the 11 leaders gathered for a photo shoot for a few minutes, but Mr. Obama and Thein Sein stayed far from each other and made no contact of any sort.

The Myanmar government has said it intends to hold elections next year as the first step toward democracy, but has not clarified whether Suu Kyi will be allowed to participate. The junta refused to honor the result of the last elections in 1990 when Suu Kyi's party won by a landslide.

The US-ASEAN joint statement is expected to call on Myanmar to ensure that the 2010 elections are "conducted in a free, fair, inclusive and transparent manner in order to be credible to the international community."

The final draft of the statement was obtained by The Associated Press. The statement will be released later Sunday. 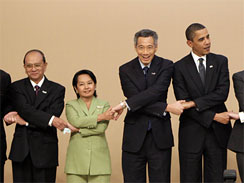 (AP Photo/Pablo Martinez Monsivais)
Mr. Obama, in a broad policy speech in Tokyo on Saturday, also made a point of mentioning Suu Kyi by name.

Although the United States recently eased its policy toward Myanmar by initiating talks with the generals, it has made clear economic sanctions won't be lifted until Suu Kyi is released.

Earlier this month, two senior U.S. diplomats , and also had a private meeting with Suu Kyi. It was the highest-level U.S. visit to Myanmar in 14 years.

Sunday's U.S.-ASEAN summit - held just after the 21-nation Asia-Pacific Economic Cooperation forum - is the outcome of the new thinking in Washington that ignoring Myanmar will not yield any results, and relations with Southeast Asia should not be held hostage by the junta.