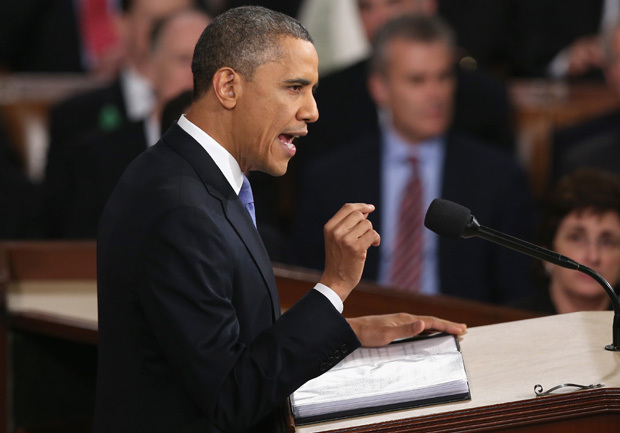 Delivering his annual address to Congress for the fifth time in his presidency, President Obama in his State of the Union tonight made a sweeping pitch for an economic blueprint he says reflects "smarter," not "bigger" government, and laid out a series of proposals he promises will help deliver to the American people "a growing economy that creates good, middle-class jobs" without increasing the deficit "by a single dime."

The president, in his fourth official State of the Union, outlined a broad swath of goals for the future of his tenure, touching on everything from the war in Afghanistan, to cyber-security, to his commitment to reducing gun violence in America.

But the primary focus of his remarks revolved around an outline for economic growth guided, he said, by principles that place paramount importance of reigniting what he called "the true engine of America's economic growth: A rising, thriving middle-class."

"A growing economy that creates good, middle-class jobs -- that must be the North Star that guides our efforts," Mr. Obama said. "Every day, we should ask ourselves three questions as a nation: How do we attract more jobs to our shores? How do we equip our people with the skills needed to do those jobs? And how do we make sure that hard work leads to a decent living?"

In his four-pronged strategy for achieving that goal, Mr. Obama stressed the need to attract more jobs to the U.S.; equip Americans with the skills they need to participate in a competitive global economy; raise the minimum wage to $9 an hour so it is tied to the cost of living; and cut the deficit in a "balanced" way. He also called for $1 billion for new manufacturing research, $50 billion for "fix it first" road repair funds, a new trade deal with the European Union.

The president particularly stressed the need for affordable, accessible education for students of all ages -- from toddlers to college students -- calling for universal pre-school for four-year-olds, as well as tweaks to standards for determining which colleges receive certain types of federal aid.

"Every dollar we invest in high-quality early education can save more than seven dollars later on - by boosting graduation rates, reducing teen pregnancy, even reducing violent crime," he said. "Let's also make sure that a high school diploma puts our kids on a path to a good job."

Mr. Obama promised his proposals would be revenue-neutral.

"Nothing I'm proposing tonight should increase our deficit by a single dime," he pledged. "It's not a bigger government we need, but a smarter government that sets priorities and invests in broad-based growth."

The president underscored, as he has many times, a commitment to reducing the national deficit while also avoiding a series of across-the-board "sequester" cuts slated to go into effect March 1. But he argued that as important as it is to avert the sequester cuts, they can't be prevented by "making even bigger cuts to things like education and job training; Medicare and Social Security benefits," as he noted "some in this Congress have proposed."

"Yes, the biggest driver of our long-term debt is the rising cost of health care for an aging population," he said. "But we can't ask senior citizens and working families to shoulder the entire burden of deficit reduction while asking nothing more from the wealthiest and most powerful... Most Americans - Democrats, Republicans, and independents - understand that we can't just cut our way to prosperity."

Mr. Obama said he is prepared to enact a series of limited cost-cutting reforms for Medicare, including measures that would reduce taxpayer subsidies to prescription drug companies, and ask more from wealthy seniors.

But for the remaining deficit reduction savings, he reiterated his call for comprehensive tax reform, urging Congress to support the closing of tax loopholes and deductions "for the well-off and connected."

"After all, why would we choose to make deeper cuts to education and Medicare just to protect special interest tax breaks? How is that fair? How does that promote growth?" he asked. "Now is our best chance for bipartisan, comprehensive tax reform that encourages job creation and helps bring down the deficit."

Mr. Obama announced a new executive order aimed protecting the U.S. against cyber attacks, and stressed the importance of strengthening the nation's defenses "by increasing information sharing, and developing standards to protect our national security, our jobs, and our privacy."

He also announced the next step his administration's timetable for drawing down the Afghan war - including the return of 34,000 U.S. troops by this time next year.

"This drawdown will continue," said Mr. Obama. "And by the end of next year, our war in Afghanistan will be over."

He made a strong push for climate change legislation, contending that "for the sake of our children and our future," action must be taken.

"The fact is, the 12 hottest years on record have all come in the last 15. Heat waves, droughts, wildfires, and floods - all are now more frequent and intense," Mr. Obama said. He argued that Congress and his administration must work together to develop a job-friendly clean energy economy. But he also said he would not let congressional obstruction prevent him from taking action on his own.

"If Congress won't act soon to protect future generations, I will," he continued. "I will direct my Cabinet to come up with executive actions we can take, now and in the future, to reduce pollution, prepare our communities for the consequences of climate change, and speed the transition to more sustainable sources of energy."

On immigration reform, Mr. Obama insisted that "real reform means establishing a responsible pathway to earned citizenship" and finding a way to "cut waiting periods, reduce bureaucracy, and attract the highly-skilled entrepreneurs and engineers that will help create jobs and grow our economy."

"We know what needs to be done," he said. "As we speak, bipartisan groups in both chambers are working diligently to draft a bill, and I applaud their efforts. Now let's get this done. Send me a comprehensive immigration reform bill in the next few months, and I will sign it right away."

Toward the end of his hour-long speech, the president also made an impassioned plea for the nation to "come together to protect our most precious resource -- our children" -- in the face of gun violence.

"It has been two months since Newtown. I know this is not the first time this country has debated how to reduce gun violence. But this time is different," Mr. Obama said. "Overwhelming majorities of Americans -- Americans who believe in the Second Amendment -- have come together around commonsense reform, like background checks that will make it harder for criminals to get their hands on a gun."

He paid special tribute to 15-year-old Hadiya Pendleton, who was shot to death in Chicago just days after performing at an inauguration-related event.

"She was 15 years old. She loved Fig Newtons and lip gloss. She was a majorette. She was so good to her friends, they all thought they were her best friend," the president said, of Pendleton. "Hadiya's parents, Nate and Cleo, are in this chamber tonight, along with more than two dozen Americans whose lives have been torn apart by gun violence," he continued. "They deserve a vote."

Pendleton's parents sat with First Lady Michelle Obama, who was also joined by Jill Biden, senior White House adviser Valerie Jarrett, and a number of other special guests. And more than 20 House Democrats brought as guests people who had been impacted by gun violence.

Among Michelle Obama's other special guests included Lt. Brian Murphy, who was wounded while responding to the Sikh temple shooting in Wisconsin last August; a DREAM student; the winner of the 2012 Intel International Science and Engineering Fair; a wounded warrior, the CEO of Apple, and several others.

Outgoing Energy Secretary Steven Chu was tapped to sit out the address, which means he would be president if anything catastrophic happened to those present for tonight's address.