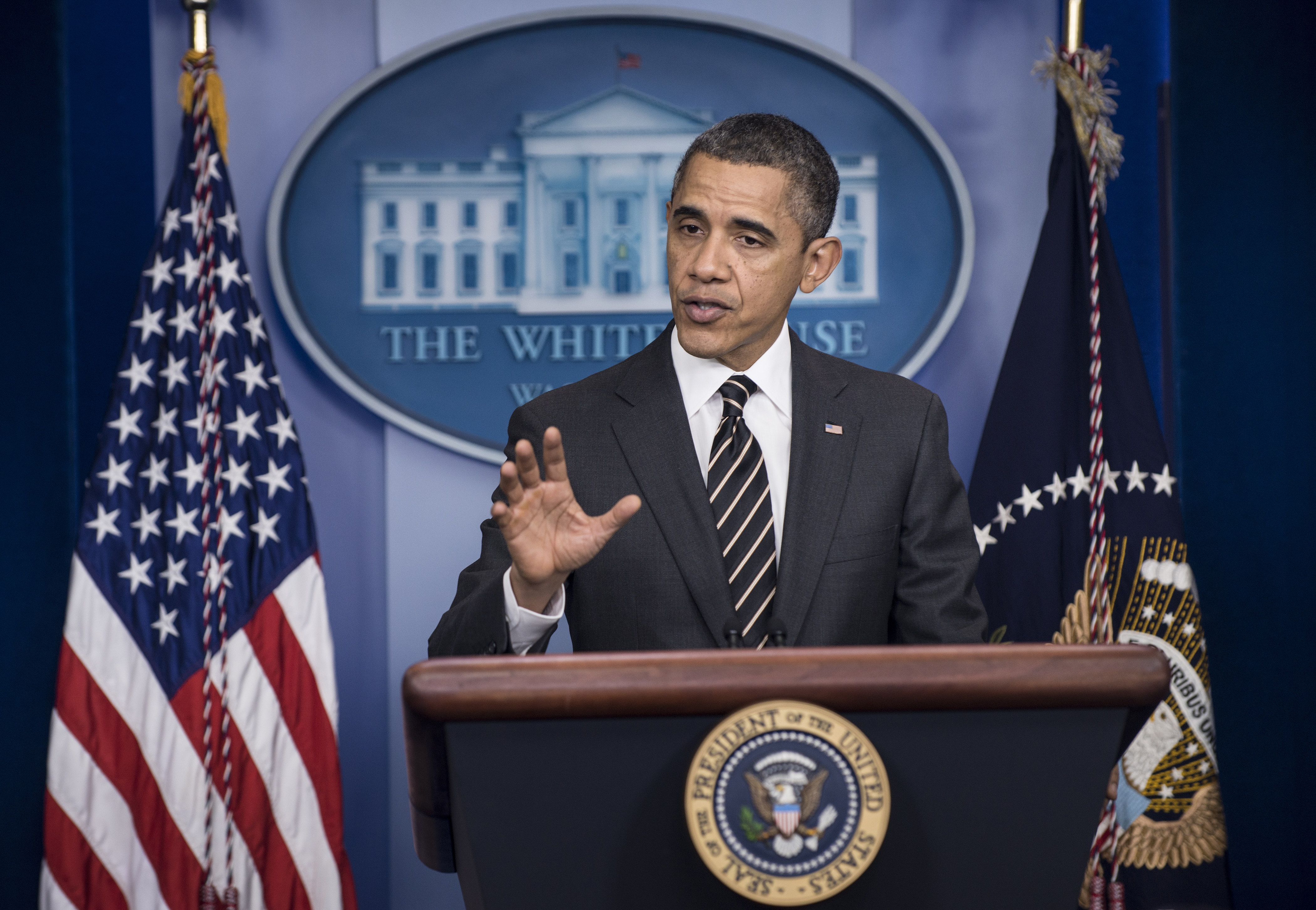 With just three weeks until a far-reaching set of spending cuts are scheduled to go into effect, President Obama today urged Congress to pass a stopgap measure aimed at staving off more than $1 trillion worth of reductions, calling for a smaller package of spending cuts and tax reforms he said would help avoid putting the economy in jeopardy from "self-inflicted wounds."

"Economists and business leaders from across the spectrum have said that our economy is poised for progress in 2013 and we've seen signs of this progress over the last several weeks," Mr. Obama said told reporters at the White House today. "But we've also seen the effects that political dysfunction can have on our economic progress... The threat of massive, automatic cuts has already started to affect business decisions. So we've been reminded that while it's critical for us to cut wasteful spending, we can't just cut our way to prosperity."

The president urged Congress, not for the first time, to reconsider a "balanced approach" to deficit reduction, and said that deals he had previously been negotiating with House Speaker John Boehner, R-Ohio, were "still on the table."

"We've made progress. And I still believe that we can finish the job with a balanced mix of spending cuts and more tax reform," Mr. Obama said. "The proposals that I put forward during the 'fiscal cliff' negotiations in discussions with Speaker Boehner and others are still very much on the table."

In the final hours of 2012, Congress passed a short-term deal to avert the so-called sequester, a $1.2 trillion package of across-the-board spending cuts, spread equally over defense and domestic non-defense spending over the course of 10 years. But that deal expires on March 1, and Congress now faces yet another round of painstaking negotiations over a way to avert cuts that many say would devastate the economy. At the same time, Congress is also digging into negotiations for a bill to fund the government, the funding for which runs out on March 27.

Mr. Obama today pushed Congress to pass an unspecified package of smaller spending cuts, combined with tax reforms made by closing corporate loopholes, that would buy Congress time to come up with a more comprehensive solution through a bipartisan budget process.

"I know that a full budget may not be finished before March 1st and unfortunately that's the date when a series of harmful automatic cuts to job creating investments and defense spending - also known as the sequester - are scheduled to take effect," he said. "So, if Congress can't act immediately on a bigger package, if they can't get bigger package done by the time the sequester is scheduled to go into effect, then I believe that they should at least pass a smaller package of spending cuts and tax reforms that would delay the economically damaging effects of the sequester for a few more months until congress finds a way to replace these cuts with a smarter solution."

The sequester package was never intended to go into effect: In fact, it was designed to be so potentially devastating as to force Republicans and Democrats to on an alternate solution to reduce the deficit. But amid a bitterly partisan political atmosphere, lawmakers have been unable to agree on a deal to replace it.

"There is no reason that the jobs of thousands of Americans who work in national security or education or clean energy, not to mention the growth of the entire economy, should be put in jeopardy just because folks in Washington couldn't come together to eliminate a few special interest tax loopholes or government programs that we agree need some reform," he said. "Our economy right now is headed in the right direction, and it will stay that way as long as aren't any more self-inflicted wounds coming out of Washington. So let's keep on chipping away at this problem together as Democrats and Republicans to give our workers and our businesses the support that they need to thrive in the weeks and months ahead."

Even before the president delivered his remarks, some House Republicans had begun to register their objections.

In a statement, Boehner, R-Ohio, argued that "the president's sequester" should be replaced with a GOP-passed House bill that would maintain many of the cuts in the original sequester - including those to Medicare - while eliminating some of the defense cuts.

"President Obama first proposed the sequester and insisted it become law," said Boehner. "Republicans have twice voted to replace these arbitrary cuts with common-sense cuts and reforms that protect our national defense... The president's sequester should be replaced with spending cuts and reforms that will start us on the path to balancing the budget in 10 years."

Sens. John McCain, R-Ariz., Lindsey Graham, R-S.C., and Kelly Ayotte, R-S.C., released a statement after Mr. Obama spoke, promising to "examine" his proposal. At the same time, they shot down the idea of increased revenues, arguing that "the last thing America needs is a tax increase."

"While the President last year promised that sequestration 'will not happen,' he has declined to address this looming crisis for more than a year. We appreciate that the President now wants to come to the negotiating table and we will examine his proposal closely," the three senators said today in a joint statement. "In the coming days, we will be introducing legislation - as we did last year - to avoid the first year of defense budget cuts by reducing the size of the federal workforce though attrition as recommended by the Simpson-Bowles Commission. This common-sense approach avoids a damaging self-inflicted wound to America's security, and we hope the President will join us in this effort."

Despite Boehner's references to "the president's sequester," 174 House Republicans voted for the measure that put it into place, as did 28 Senate Republicans. Ninety-five House Democrats and 45 Senate Democrats supported the legislation as well.