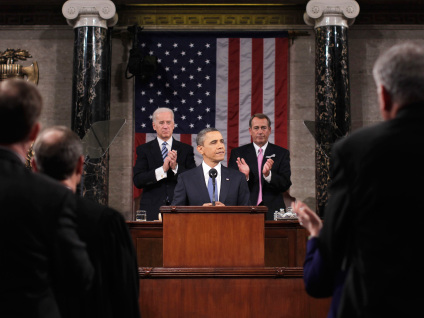 President Obama appealed to his colleagues in Washington to put politics aside and make the long-term investments and reforms needed to put America back to work in his State of the Union address Tuesday.

"The world has changed," Mr. Obama said. "The rules have changed."

He said that while the new global economy presents the United States with evolving challenges, the nation remains "poised for progress." (watch the full speech at left)

That progress, he said, will be measured "by the success of our people. By the jobs they can find and the quality of life those jobs offer. By the prospects of a small business owner who dreams of turning a good idea into a thriving enterprise."

"The future is ours to win," Mr. Obama continued. "But to get there, we can't just stand still... Sustaining the American Dream has never been about standing pat. It has required each generation to sacrifice, and struggle, and meet the demands of a new age."

The president this evening put forward a plan to "win the future" that includes robust investments in innovation, reforms in education, government and tax reform, new efforts to repair the nation's infrastructure, and a plan to confront the nation's "mountain of debt."

"At stake is whether new jobs and industries take root in this country, or somewhere else," he said.

But as Mr. Obama shapes his agenda for his next two years in office, he will also have to consider the demands of the new Republican majority in the House and the strengthened Republican caucus in the Senate. After taking the podium before a joint session of Congress this evening, Mr. Obama congratulated his Republican colleagues for their victories in the 2010 midterm elections. He also pressed them of their new obligations.

"With their votes, the American people determined that governing will now be a shared responsibility between parties," he said. "New laws will only pass with support from Democrats and Republicans. We will move forward together, or not at all."

The president acknowledged that in an unusual display of bipartisanship, Republicans and Democrats sat intermingled in the House chamber. He urged the Congress to do more than offer a symbolic gesture of civility.

The bipartisanship seating arrangement, suggested by Democratic Sen. Mark Udall of Colorado, was inspired by the tragic mass shooting in Tucson, Ariz. earlier this month. The shooting interrupted a town hall-style meeting hosted by Rep. Gabrielle Giffords (D-Ariz.) and left six dead and 14 injured, including Giffords.

Mr. Obama acknowledged Giffords' absence (marked by an empty chair among the Arizona congressional delegation) and said, "there's a reason the tragedy in Tucson gave us pause." (video at left)

"Amid all the noise and passions and rancor of our public debate, Tucson reminded us that no matter who we are or where we come from, each of us is a part of something greater - something more consequential than party or political preference," he said. "We are part of the American family."

The simple recognition of that unity, however, will not usher in a new era of cooperation, the president said. "What comes of this moment is up to us."

Poll: High Marks for Obama's State of the Union Speech
What Obama's New Slogan Means for America
Obama's Battle Cry for the Next Two Years
What Wasn't in Obama's Speech: Gun Control

Adopting the GOP Agenda -- to a Point

In the first two years of his presidency, Mr. Obama said, Washington has taken steps that "may have broken the back of this recession." The stock market has come "roaring back" and corporate profits are up, he said.

He hailed passage of the tax cut deal that he forged with Republicans late last year, which extended all of the Bush-era tax cuts and added nearly $900 billion to the deficit. Mr. Obama said that the deal will "grow the economy" and create jobs.

"Thanks to the tax cuts we passed, Americans' paychecks are a little bigger today," he said. "Every business can write off the full cost of the new investments they make this year."

In a nod to Republicans who have called for deep federal budget cuts, Mr. Obama said he is proposing a five-year domestic spending freeze. This would reduce the deficit by more than $400 billion over the next decade, he said, and require "painful cuts." The Defense Department has already agreed to cut tens of billions of dollars from its budget, he noted.

However, he warned against overzealous spending cuts.

"Cutting the deficit by gutting our investments in innovation and education is like lightening an overloaded airplane by removing its engine," he said. "It may feel like you're flying high at first, but it won't take long before you'll feel the impact."

Furthermore, the president insisted that the Bush-era tax cuts for the wealthiest Americans should be allowed to expire after two years. "It's not a matter of punishing their success," he said. "It's about promoting America's success."

Competing in the Global Economy

As nations like China and India are growing and thriving on the world stage, the United States needs to "out-innovate, out-educate, and out-build the rest of the world," Mr. Obama said. "We have to make America the best place on Earth to do business."

The president praised innovative businesses like Google and Facebook and called for a new "Sputnik moment." (video at left) The budget he will send to Congress within a few weeks, Mr. Obama said, will call for new investments in biomedical research, information technology and clean energy technology. The president set a goal to have 80 percent of America's electricity to come from clean energy sources by 2035.

Post-Speech Webcast Hosted by Katie Couric
The Pundits React
What Did You Think?

Making new investments in innovation does not mean "just handing out money," Mr. Obama said. Rather, it is a challenge to America's scientists and engineers to build "the Apollo Projects of our time." To fund those projects, Mr. Obama called for an end to oil subsidies.

"I don't know if you've noticed, but they're doing just fine on their own," he said. "So instead of subsidizing yesterday's energy, let's invest in tomorrow's."

The president also called for more robust investments and reforms in education. He praised the "Race to the Top" initiative his administration has implemented and called for the program to replace the "No Child Left Behind" policy.

Mr. Obama also called on Congress to make permanent a tuition tax credit so that the United States can once again have the highest proportion of college graduates in the world. He reiterated his goal to prepare 100,000 new teachers in the fields of science, technology, engineering, and math.

The president also called on Washington to redouble its efforts to update America's aging infrastructure. Within 25 years, he said, 80 percent of Americans should have access to high-speed rail. And within next five years, he said, the next generation of high-speed wireless should be available to 98 percent of all Americans.

Obama Calls for a "New Level of Engagement" in Foreign Policy

While new investments are imperative, the president said, the nation must also address its "mountain of debt."

"Now that the worst of the recession is over, we have to confront the fact that our government spends more than it takes in," he said. "That is not sustainable."

Mr. Obama acknowledged the work of his bipartisan deficit commission, which last year put forward a comprehensive plan to reduce the national deficit. Without endorsing any specific proposals, he praised their conclusion that no excessive spending should go without scrutiny.

"This means further reducing health care costs, including programs like Medicare and Medicaid," he said. "To put us on solid ground, we should also find a bipartisan solution to strengthen Social Security for future generations."

While government scales down its costs, it should also become more efficient, Mr. Obama said, highlighting his recent call for a government-wide regulatory overhaul. The president also called for Congress to increase its transparency and abandon legislative pet projects, or earmarks.

"We cannot win the future with a government of the past," he said.

Stephanie Condon is a political reporter for CBSNews.com. You can read more of her posts here. You can also follow her on Twitter here.