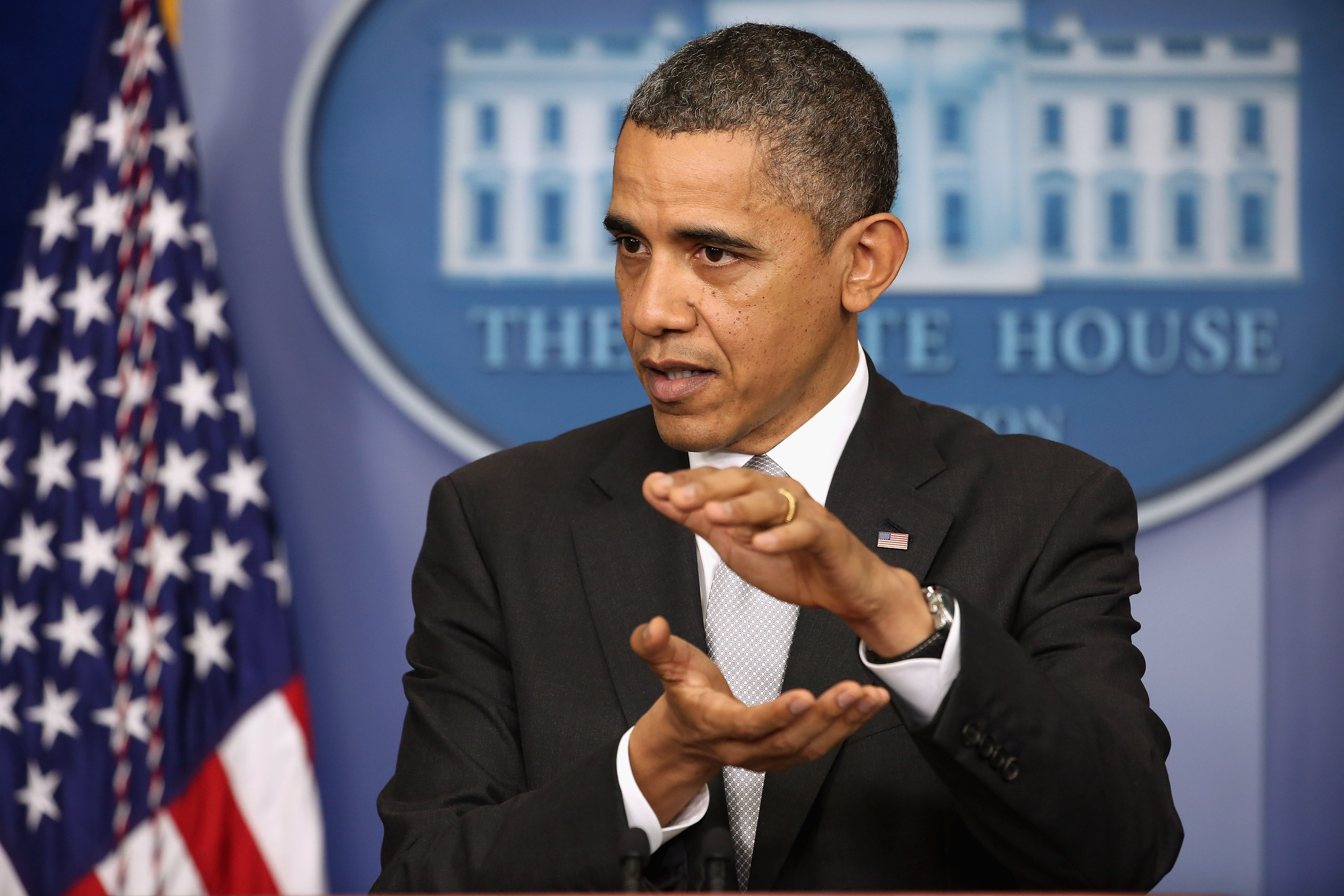 WASHINGTON Recalling the shooting of 20 first graders as the worst day of his presidency, President Barack Obama on Sunday pledged to put his "full weight" behind a legislative package next year aimed at containing gun violence.

In an interview with NBC's "Meet the Press," Obama voiced skepticism about proposals to place armed guards at schools in the aftermath of the Dec. 14 deadly assault at Sandy Hook Elementary School in Newtown, Conn.

In his boldest terms yet, he vowed to rally the American people around an agenda to limit gun violence and said he still supports increased background checks and bans on assault weapons and high capacity bullet magazines.

"It is not enough for us to say, `This is too hard so we're not going to try,'" Obama said. "So what I intend to do is I will call all the stakeholders together. I will meet with Republicans. I will meet with Democrats. I will talk to anybody.

"I think there are a vast majority of responsible gun owners out there who recognize that we can't have a situation in which somebody with severe psychological problems is able to get the kind of high capacity weapons that this individual in Newtown obtained and gun down our kids. And, yes, it's going to be hard."

Obama's comments come as the schoolroom shooting has elevated the issue of gun violence to the forefront of public attention.

Six adults also died at the school. Authorities say the shooter killed himself and his mother at their home.

The slayings have prompted renewed calls for greater gun controls. The National Rifle Association has resisted those efforts vociferously, arguing instead that schools should have armed guards for protection.

"I am skeptical that the only answer is putting more guns in schools," Obama said. "And I think the vast majority of the American people are skeptical that that somehow is going to solve our problem."

Obama said he intended to press the issue with the public.

"The question then becomes whether we are actually shook up enough by what happened here that it does not just become another one of these routine episodes where it gets a lot of attention for a couple of weeks and then it drifts away. It certainly won't feel like that to me. This is something that - you know, that was the worst day of my presidency. And it's not something that I want to see repeated."

Besides getting gun violence legislation passed next year, Obama also listed immigration as a top priority for 2013 as well as deficit reduction. A big deficit reduction deal with Republicans proved elusive this month and Obama is now hoping Senate Democratic and Republican leaders salvage a scaled back plan that avoids across the board tax increases for virtually all Americans.

He issued a defense of former Republican Sen. Chuck Hagel of Nebraska, who has been mentioned as one of the leading candidates for new secretary of defense.

Hagel, who opposed President George W. Bush's decision to go to war with Iraq, has been criticized in conservative circles for not being a strong enough ally of Israel. Many liberals and gay activists also have banded against him for comments he made in 1998 about an openly gay nominee for an ambassadorship

Obama, who briefly served with Hagel in the Senate, stressed that he had yet to make a decision on a secretary of defense but said called Hagel a "patriot."

"He is somebody who has done extraordinary work both in the United States Senate," he said. "Somebody who served this country with valor in Vietnam. And is somebody who's currently serving on my intelligence advisory board and doing an outstanding job."

He noted that Hagel had apologized for his 14-year-old remark. "And I think it's a testimony to what has been a positive change over the last decade in terms of people's attitudes about gays and lesbians serving our country," Obama said.