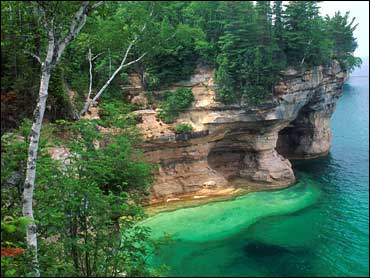 Obama called the new law among the most important in decades "to protect, preserve and pass down our nation's most treasured landscapes to future generations."

At a White House ceremony, Obama said the law guarantees that Americans "will not take our forests, rivers, oceans, national parts, monuments, and wilderness areas for granted, but rather we will set them aside and guard their sanctity for everyone to share. That's something all Americans can support."

The law — a collection of nearly 170 separate measures — represents one of the largest expansions of wilderness protection in a quarter-century. It confers the government's highest level of protection on land in nine states.

Land protected under the 1,200-page law ranges from California's Sierra Nevada and Oregon's Mount Hood to Rocky Mountain National Park in Colorado and parts of the Jefferson National Forest in Virginia.

Land in Idaho's Owyhee canyons, Pictured Rocks National Lakeshore in Michigan and Zion National Park in Utah also won wilderness protection, and more than 1,000 miles of rivers in nearly a dozen states were designated as wild and scenic. The law expands wilderness designation — which blocks nearly all development — into areas that previously were not protected.

The law also protects land in Alaska under a contentious land swap that allows the state to go forward with a planned airport access road in a remote wildlife refuge near the Bering Sea. Critics call the project a "road to nowhere."

Environmental groups and lawmakers in both parties said the law will strengthen the national park system, restore national forests, preserve wild and scenic rivers, protect battlefields and restore balance to the management of public lands.

Opponents, mostly Republicans, had called the legislation a "land grab" that would block energy development on vast swaths of federal land.

Aside from the public lands provisions in the bill, the measure includes the Christopher and Dana Reeve Paralysis Act, which provides for paralysis research; paralysis rehabilitation and care; improving quality of life for persons with paralysis and other physical disabilities, reports CBS News White House correspondent Mark Knoller.

Mr. Obama said it's the first piece of comprehensive legislation specifically aimed at addressing the challenges faced by Americans living with paralysis, Knoller reports. The president called Reeve's son Matthew to the stage for the signing.