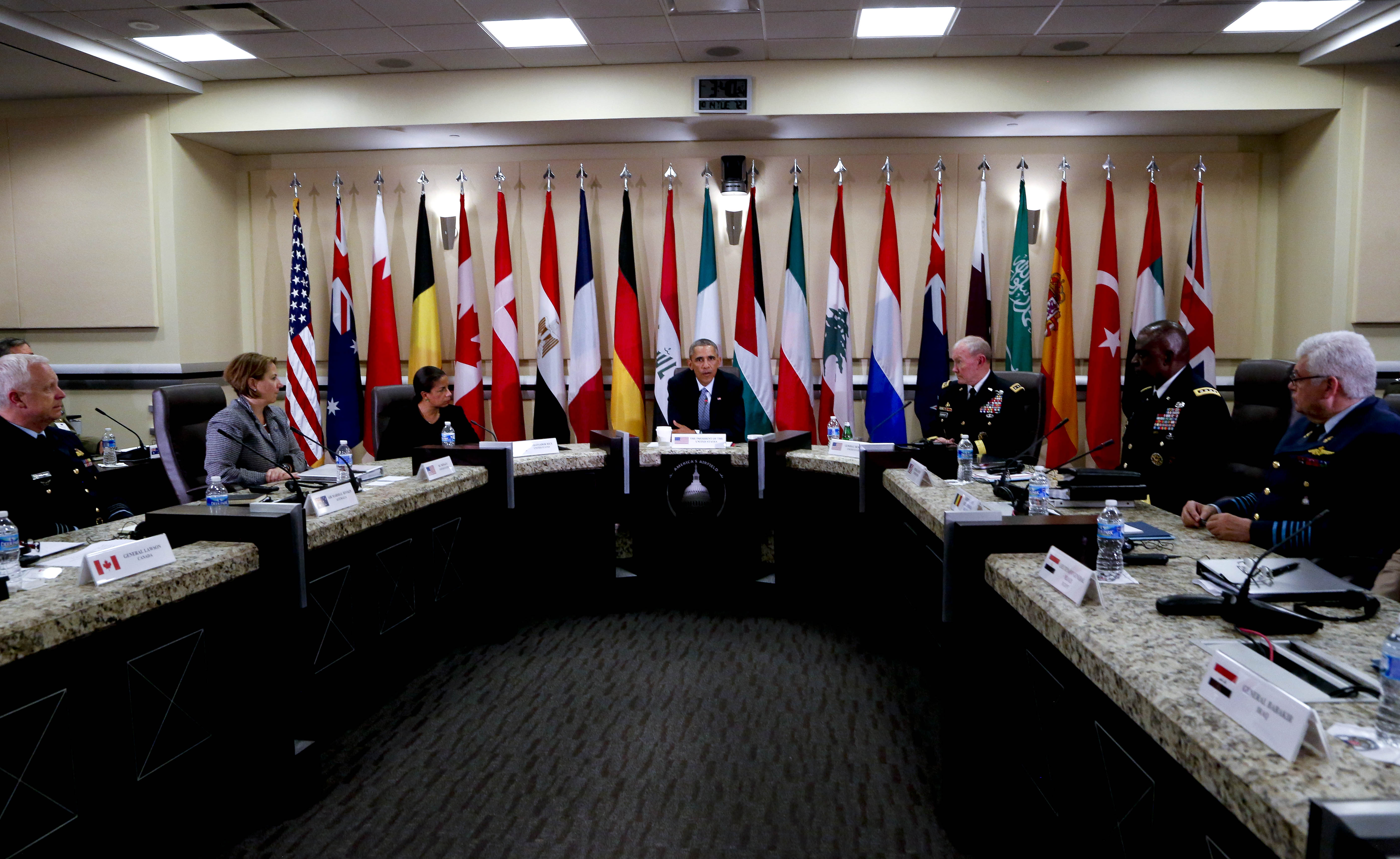 President Obama said Tuesday that the fight against the Islamic State of Iraq and Syria (ISIS, also known as ISIL) will be a "long-term campaign" that will have both successes and setbacks.

"There are not quick fixes involved. We are still in the early stages. As with any military effort there will be days of progress and there are going to be periods of setback, but our coalition is united behind this long-term effort," the president said. "Our nations agree that ISIL poses a significant threat to the people of Iraq and Syria. It poses a threat to surrounding countries and because of the numbers of foreign fighters that are being attracted and the chaos that ISIL is creating in the region ultimately it will pose a threat beyond the Middle East."

Mr. Obama's remarks came after he attended a meeting with Joint Chiefs of Staff Chairman Gen. Martin Dempsey and the military leadership of 21 nations that are part of the U.S.-led coalition fighting ISIS.

The Islamic militants continue to gain more ground in Iraq and Syria in spite of coalition airstrikes intended to stop their advances and target their command and control centers. ISIS has captured an Iraqi army camp in Hit, west of Baghdad, as they edge closer to the Iraqi capital, and they threaten to overtake the town of Kobani on the Turkey-Syria border.

The coalition launched additional airstrikes in and around Kobani Tuesday targeting ISIS vehicles, supply depots, staging points and military positions. The fighting has caused more than 200,000 people to flee across the border into Turkey. Still, CBS News National Security Correspondent David Martin reports the U.S. is not necessarily committed to saving the city.

Mr. Obama said Tuesday that the coalition partners are "deeply concerned" about the situation in Kobani and promised that airstrikes will continue.

But he said the fight against the group must go beyond military engagement.

"This is not a classic army in which we defeat them on the battlefield and then they ultimately surrender. What we're also fighting is an ideological strain of extremism that has taken root in too many parts of the region," Mr. Obama said. "This cannot simply be a military campaign. This has to be a campaign that includes all the dimensions of our power. We have to do a better job communicating an alternative vision for those who are currently attracted to the fighting inside Iraq and Syria."

The president also addressed the Ebola outbreak, saying that the administration is "surging resources" into Dallas to determine how exactly a nurse who helped care for an Ebola patient there contracted the virus.

"We are going to make sure that all the lessons learned from Dallas are then applied to hospitals and health centers around the country. As I've said before, we have the public health infrastructure and systems and support that make an epidemic here highly unlikely. But, obviously one case is too many and we've got to keep doing everything we can particularly to protect our healthcare workers because they're on the front lines in battling this disease," the president said.

He said the nation's thoughts and prayers are with the nurse, and praised health care workers who sometimes put themselves at risk to care for patients.

"We need to eliminate those risks for them and we're confident that we can build the protocols and make sure they are observed carefully to avoid additional repeats of what's happened in Dallas."