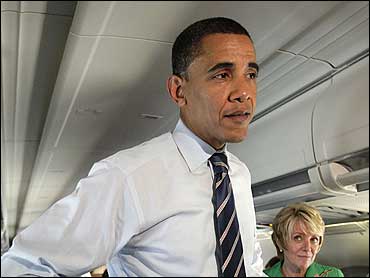 Dobson used his Focus on the Family radio program to highlight excerpts of a speech Obama gave in June 2006 to the liberal Christian group Call to Renewal.

Speaking to reporters on his campaign plane before landing in Los Angeles, Obama said the speech made the argument that people of faith, like himself, "try to translate some of our concerns in a universal language so that we can have an open and vigorous debate rather than having religion divide us."

Obama added, "I think you'll see that he was just making stuff up, maybe for his own purposes."

In his program, Dobson focused on examples Obama cited in asking which Biblical passages should guide public policy. For instance, Obama said Leviticus suggests slavery is OK and eating shellfish is an abomination. Obama also cited Jesus' Sermon on the Mount, "a passage that is so radical that it's doubtful that our own Defense Department would survive its application."

"Folks haven't been reading their Bibles," Obama said in the speech.

"I think he's deliberately distorting the traditional understanding of the Bible to fit his own worldview, his own confused theology," Dobson said.

Asked about Dobson's assessment, Obama said "somebody would be pretty hard-pressed to make that argument" that he was distorting the Bible.

The Rev. Kirbyjon Caldwell, a Methodist pastor from Texas and longtime supporter of President Bush who has endorsed Obama, said Tuesday that he belongs to a group of religious leaders who are working independently of Obama's campaign and launching a Web site to counter Dobson at www.jamesdobsondoesntspeakforme.com.

Caldwell said he has great respect for Dobson's advocacy for families, but said the criticism of Obama was "a bit over the top" and "crossed the line."

"There has been a call for a higher level of politics and politicking," Caldwell said. "So to attack at this level is inappropriate and I think unacceptable and we at least want to hold everybody accountable."