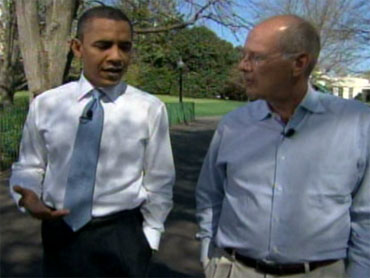 President Obama is continuing to make the case for new sanctions against Iran aimed at forcing Tehran to halt what "all the evidence indicates" is a program designed to give Iran the "capacity to develop nuclear weapons."

Iran has insisted time and again that its nuclear program is for peaceful purposes only - to produce electricity.

On Tuesday, the president said he wants new U.N. sanctions enacted against Tehran - ideally "within weeks."

And, in an interview before Mr. Obama hit the White House basketball court Thursday with "Early Show" co-anchor Harry Smith, the president observed, "All the evidence indicates that the Iranians are trying to develop the capacity to develop nuclear weapons. They might decide that, once they have that capacity that they'd hold off right at the edge -- in order not to incur -- more sanctions. But, if they've got nuclear weapons-building capacity -- and they are flouting international resolutions, that creates huge destabilizing effects in the region and will trigger an arms race in the Middle East that is bad for U.S. national security but is also bad for the entire world."

When Smith pointed out that sanctions have been tried before and only seem "to bolster the Iranian regime,".then asked what makes Mr. Obama think they'd work this time, he replied, "The idea here is just to keep on turning up the pressure. The regime has become more isolated since I came into office. Part of the reason that we reached out to them was to say, 'You've got a path. You can take a path that allows you to rejoin the international community, or you can take a path of developing nuclear weapons capacity that further isolates you.'

"And now, we're seeing them further isolated. Over time, that is going to have an effect on their economy. Now, you know, I have said before that we don't take any options off the table, and we're gonna continue to ratchet up the pressure and examine how they respond. But we're gonna do so with a unified international community -- that puts us in a much stronger position."

On another hot-button issue, the president said time will prove him right about health care reform.

Smith noted that polls continue to show the public reluctant to get on board with it, Mr. Obama laughed as he said, "A whole week after it passed!"

More from the Interview:
Obama: "I Can Go to My Right, but I Prefer My Left"
Obama: Extreme Right-Wing Shows "Troublesome"
Obama, Harry Smith Shoot Some Hoops
Obama Compares Health Care Fight to Basketball

Why did he keep pressing for it even as it was, as Smith put it, "declared dead a bunch of different times over the last 14 months or so"?

"Well, because it's the right thing to do," the president responded.

"But," Smith said, "there were plenty around you, even people within (the White House), who said, 'Let's do it piecemeal. Let's do it one piece at a time." '

Mr. Obama continued, "The one thing I don't do, Harry, is to think short-term based on day-to-day polls. I look at what does the country need long-term. And what we know is, is that insurance rates in the individual market are going up 30, 40 percent for people if they don't work for big companies.

"Small businesses are getting killed. We know that Medicare and Medicaid costs are unsustainable. And so my attitude was that, if I didn't make an effort now to change how we deliver healthcare, this country was gonna go bankrupt."

Why didn't he just put off trying for it?

"Why I thought I could do it?"

"Because I have confidence that if you -- if you have good policy and you -- you're trying to do the right thing that, over time, the politics works -- works its way up."

The interview aired Friday on "The Early Show."