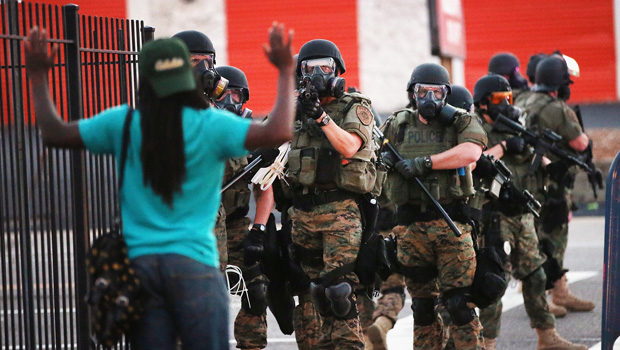 President Barack Obama said the type of racial discrimination found in Ferguson, Missouri, is not unique to that police department, and he cast law enforcement reform as a chief struggle for today's civil rights movement.

Obama said improving civil rights and civil liberties with police is one of the areas that "requires collective action and mobilization" 50 years after pivotal civil rights marches brought change to the country. The president made his first remarks about this week's Justice Department report of racial bias in Ferguson, which found officers routinely discriminating against blacks by using excessive force.

"I don't think that is typical of what happens across the country, but it's not an isolated incident," Obama told The Joe Madison Radio Show on Sirius XM radio's Urban View channel. "I think that there are circumstances in which trust between communities and law enforcement have broken down, and individuals or entire departments may not have the training or the accountability to make sure that they're protecting and serving all people and not just some."

Obama's interview was to preview his trip Saturday to Selma, Alabama, where he plans to speak from the Edmund Pettus Bridge, where white police officers beat civil rights protesters on March 7, 1965.

The president called the protests in Selma a "quintessentially American moment" in another radio interview Friday with talk show host Tom Joyner. He also focused on the next generation's responsibility to carry on the civil rights fight.

"There is work to be done right now," Obama said, answering a question about what he hopes for his own daughters. "I want [Malia and Sasha] to be engaged and involved."

Obama last visited Selma in 2007, when he was running for the Democratic presidential nomination and spoke about the responsibility of those who came after the civil rights generation of the `60s to carry on the struggle.

On Friday, Obama was kicking off the weekend's 50th anniversary with a town hall meeting at South Carolina's Benedict College, a historically black college. The White House said Obama plans to speak about efforts young people made throughout history to expand opportunity.

Obama's visit to Columbia is his first trip to South Carolina as president. Obama has just two other states to reach his goal of traveling to all 50 in office - South Dakota and Utah.