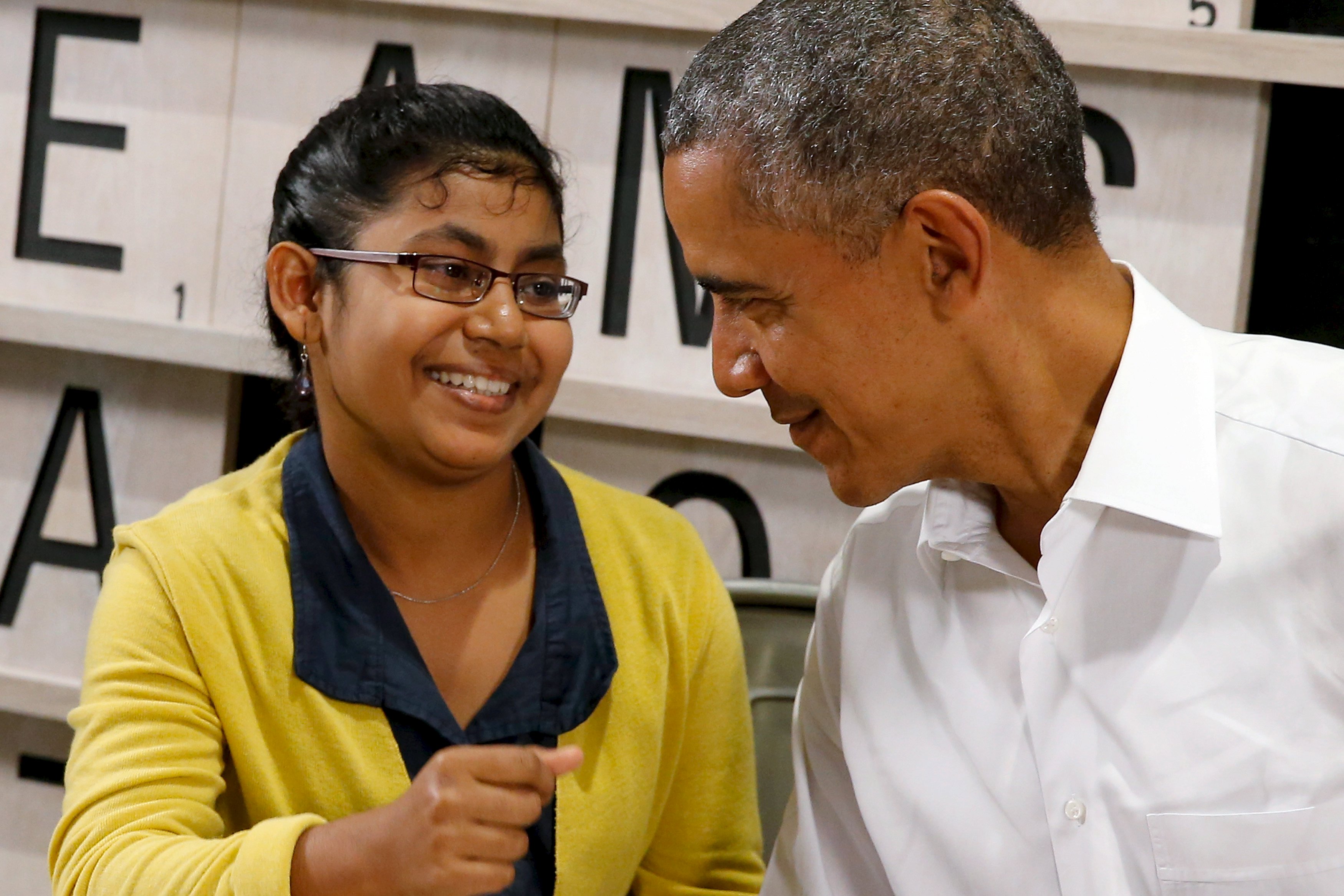 KUALA LUMPUR, Malaysia -- Brushing off refugee worries at home, President Obama crouched alongside migrant children on Saturday and declared they are the opposite of terrorists wreaking havoc from Paris to Mali. Working to put a human face on the refugee crisis, he said, "They're just like our kids."

The refugees Obama encountered at a school for poor children in Malaysia were not from Syria, and unlike the flood of Syrians meeting steep resistance in the U.S., these migrants had already been cleared to resettle in America. Still, Obama said their faces could have been those of kids from Syria, Iraq and other war-torn regions whose pursuit of a life free from violence led them far from their native homes.

"They were indistinguishable from any child in America," Obama said. "The notion that somehow we would be fearful of them - that our politics would somehow lead us to turn our sights away from their plight - is not representative of the best of who we are."

More than mere musings, Obama's comments were intended as a direct rebuke to those demanding a halt to Syrian and Iraqi refugees entering the U.S. in the light of the Islamic State's attacks in Paris. Obama said the U.S. had shown it can welcome refugees while ensuring security. "There's no contradiction," he said.

Many Americans seem to disagree. Democrats in large numbers have abandoned their president and his opposition to stiffer screening measures; forty-seven of them voted against Obama on Thursday. Having secured a veto-proof majority in the House, supporters are now hoping for a repeat in the Senate, while Obama works to shift the conversation to milder visa waiver changes that wouldn't affect Syrian refugees.

In a modest classroom where refugee children were learning English, Obama zigzagged among art projects, puzzles and a caged class rabbit as he asked children in crisp white uniforms and neckties about their aspirations for the future. Later, as he met with older refugees who will soon relocate to the U.S., he said these children "deserve love and protection and stability and an education."

He singled out one refugee from Myanmar - a petite 16-year-old in a bright yellow dress - and said she had been a victim of human trafficking until the U.N. intervened. Obama said the girl now hopes to advocate for those who have suffered a similar plight. The White House declined to name the girl out of concern for the safety of her parents still in Myanmar.

"This is who we want to help," Obama said. "This is the face of people around the world who still look to the United States as a beacon of hope."

Of the some 150,000 refugees in Malaysia, many if not most are Rohingya, a Muslim ethnic group. Tens of thousands of Rohingya have fled persecution by Myanmar's Buddhist majority and landed in Malaysia, where Obama was attending a regional economic summit.

Obama's administration has played a central role in Myanmar's emergence from brutal military rule, a transformation Obama considers a key foreign policy success. Yet the continued persecution of Rohingya remains a stain on the country's record, and even opposition leader Aung San Suu Kyi, an Obama ally whose party triumphed in recent elections, has been sharply criticized for looking the other way.

Driving the debate about accepting Syrian refugees in the U.S., as in Europe, are concerns that terrorists could exploit the system to enter the country and carry out more attacks. It's unclear whether that was a factor in the Paris attacks that killed 130, although Obama has insisted that's not a legitimate security threat. Unlike in Europe, refugees don't set foot in the U.S. until they undergo a vetting process that typically takes 18 to 24 months.

Since Paris, the refugee issue has reverberated on the 2016 presidential campaign trail, where fears about Muslims in the U.S. have been voiced with a level of openness not seen since 9/11. Obama has accused Republicans of politically driven fear-mongering, but strong support in Congress for tighter vetting measures has underscored how pervasive some of those concerns have become.

"It is wrong to condemn a strong screening process using the language of charity and morality," said House Majority Leader Kevin McCarthy, R-Calif.

Obama also met in Kuala Lumpur with representatives of civil society groups, where he called for tolerance and universal freedoms while avoiding direct criticism of Malaysia's government. He also attended a summit with Southeast Asian leaders, where he called for reaching an "ambitious and durable" climate agreement in Paris in the coming weeks and praised efforts to create a "code of conduct" to address maritime disputes in the South China Sea.

Before departing for Washington on Sunday, Obama planned to meet separately with the leaders of Laos and Singapore.