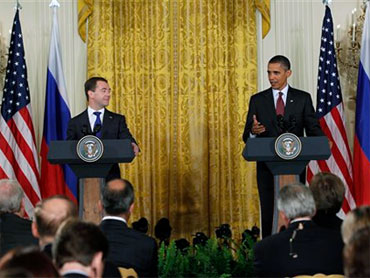 President Obama today said he has full confidence in Gen. David Petraeus, the new head of U.S. forces in Afghanistan, to carry out his administration's strategy there. The president insisted the strategy will stay the same, and for now, so will his top civilian leaders in Afghanistan.

"We are in the midpoint of implementing the strategy we came up with last year," Mr. Obama said with respect to the war in Afghanistan. "Gen. Petraeus understands that strategy because he helped shape it. My expectation is he will be outstanding in implementing it, and he will not miss a beat because of the change in command in the Afghan theater."

The president said that part of the reason he is confident Petraeus will successfully carry out the strategy in Afghanistan is that Petraeus "helped write the manual for dealing with insurgencies" and is also intimately familiar with the players on the ground.

Mr. Obama yesterday nominated Petraeus to replace Gen. Stanley McChrystal in Afghanistan, after McChrystal made disparaging remarks about the administration in a Rolling Stone article. Lawmakers have promised Petraeus a quick confirmation process, but some are planning to press the general on the administration's intentions of beginning a draw down of forces in July 2011.

"We did not say that starting July 2011 suddenly there would be no troops from the United States or allied countries in Afghanistan," Mr. Obama said today. "We said we'd begin a transition phase in which the Afghan government is taking on more and more responsibility."

"I am confident that we've got a team in place that can execute" the administration's strategy in Afghanistan, Mr. Obama said. That said, he added, "I am playing very close attention to make sure that they execute it. I will be insisting on extraordinary performance."

"I am going to be insisting on a unity of purpose on the part of all branches of the U.S. government that reflects the enormous sacrifices being made by the young men and women who are there," he said. "My expectation is that the leadership is true to those sacrifices."

The president made his remarks during a press conference with Russian President Dmitry Medvedev, after a bilateral meeting between the two.

Today's meeting was about "not simply resetting our relationship but also broadening it," Mr. Obama said. The meeting showcased the progress the two countries have made on a number of diplomatic fronts, such as signing a new major nuclear treaty and expanding economic ties.