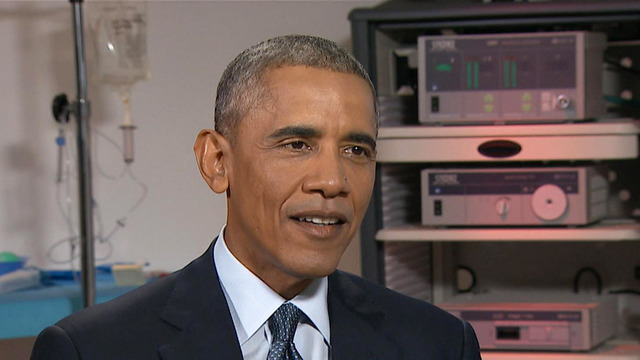 While his administration announced efforts to highlight links between climate change and its impact on health, President Obama delved into his own family's personal medical history in an interview Tuesday with CBS News, touching on his daughter's early struggles with asthma.

"I've seen how scary it is when your kid comes up to you, your four-year-old, and says, 'I'm having trouble breathing,'" the president told CBS News' Chief Medical Correspondent Dr. Jonathan LaPook.

"Malia - early on, when she was young - had asthma," Mr. Obama explained. "And we had to go to the emergency room once. We had good health insurance, and we had the capacity to really knock it out early, so that over time, she was able to not have to carry an inhaler around."

The president's comments came as the White House is trying to put a human face on the health impacts of climate change.

"I'm a dad like everybody else," Mr. Obama said.

The CDC (Centers for Disease Control and Prevention) has blamed climate change for rising asthma rates. It has resulted in fewer days of frost and more with warm temperatures, which "can contribute to shifts in flowering time and pollen initiation," the CDC's website says. Pollen is one of the major triggers for allergic asthma, the variant suffered by over half of all people diagnosed with asthma.

The administration's efforts to engage Americans on the issue included the announcement of a new draft study, a summit, and new data-sharing initiatives with tech titans Google, Facebook and others, all part of an attempt to make information about the impact of climate change on health more accessible to the public.

"[W]e want these doctors and nurses treating their patients to also provide patients information that, 'You know what? It's getting hotter, and that means that we're going to see more cases like this.' And that's typically how we change the culture."

Worldwide, the president pointed out that the State Department has already made some efforts that have paved the way for international involvement in the fight against climate change, touting the work of Hillary Clinton during her tenure as the country's chief diplomat.

"I've spoken to Hillary when she was secretary of state, and she was a thought leader on this, in my administration," Mr. Obama said. "And we recently announced agreements with China where they committed to reducing their carbon emissions."

President Obama admits that trying to steer away from the negative impacts of climate change won't be easy.

"This is not gonna be solved overnight. This is not solved with one bill," the president said. "It's really a matter of political will, and political will typically does not come from the top down."